Everyone is asking: What do we do now? How do we save ourselves? And what does Hashem want us to learn, and repent for, in all of this? The answer is simple: Love peace and truth!

These are difficult days. We are in the midst of a painful second wave of Corona, Hashem should save us all. All of the signs of the birth-pangs of Moshiach have already been fulfilled to the highest extent. Everyone is asking: So what do we do now?! How do we save ourselves? And what does Hashem want us to learn, and repent for, in all of this?

The answer comes from Rashi’s commentary on the Torah portion of Korach: “Come and see, how  difficult  is  machloket  (arguments, strife, and conflict). The Jewish court of law (Beit Din) does not have to punish this sin until the child is an adolescent, and the Heavenly Court does not judge a person until the age of 20. But those who joined Korach’s rebellion – even the babies were punished and killed!” In fact, even their possessions went with them into the pit, even possessions that other people had borrowed…

This is just one story, among so many stories from the Gemara and Midrashim, and so many more stories. You could fill entire books just with the terrible stories of what happened to people who became involved in arguments. On the flip side, how many books could we write about how wonderful peace and unity is! G-d found no vessel better to hold blessings in, than peace!

This must be a big wake-up call for the Jewish people, and the entire world. How much everyone must focus on loving one another! How much we must push ourselves with all our strength, to focus on creating peace and unity between all the different factions among us! And how much we must absolutely abhor and distance ourselves from every form of fighting, arguments and strife – both within our families, and in our communities at large. Just how much we must be careful to respect each and every person around us, and each and every group.

Does it make sense that we should hate someone because they, or their parents, or their grandparents, were born in a particular country? Of a particular race, or creed? Is there no greater sinat chinam – baseless hatred – than this? Did he decide what family he would be born into? Even if he chose to join a particular group, or follow a particular rabbi or leader – is that a justifiable reason to hate him? How long will each person hate his fellow for no good reason at all? Is this G-d’s will for us? Is such base behavior going to bring us closer to the Redemption – or only continue to push it farther away?

Each one of us must carefully check himself – how much do we really exhibit the trait of peace? We must look at our behavior, and find every little spot where we are arguing with others, or hating for no reason, and fix it. Recognize that your true spiritual stature is determined by how much you live at peace with others.

Recognize also, that as I mentioned previously in this series, truth goes hand in hand with peace, as in the verse, “The truth and peace they have loved.” Someone who is involved in arguments and strife cannot say that the truth is on his side! He clearly does not live according to the truth because he does not live with peace! Nor has he even started to taste what it is like to serve G-d with truth or live with emuna, no matter what his external appearances may be.

We must understand that we actually have an inborn desire to fight with others and “win,” to be better than others, and argue. Our Evil Inclination tries to tell us that we are “pursuing truth” but nothing could actually be farther than the truth. As with every other desire, it is just an imagination! We must recognize this potential and encourage ourselves to feel good about ourselves because of our innate goodness, and not because we are “better” than someone else. Recognize, that when your desire is to “win” in order to prove yourself – you will never, ever find the real truth. Even if you were to find it, you would deny it in your need to be “right”!

You will never find the truth when you fight, because the truth flees from all forms of arguments and strife. Rebbe Nachman says clearly in Likutei Moharan 122: “It is known that the need to be right/win an argument cannot stand the truth. Even if he will see the truth, he will push it away since he needs to right and win the argument, and this is very clear.” Recognize that by definition, the path of fighting only leads to more falsehood and lies!

The world will never come to its perfection through arguments, fighting and hatred. Never! Just the opposite – we need a lot of Divine assistance and blessings right now, and the only way to get that is by making peace and pursuing it. Everyone in the world needs to sit and speak to each other, without any need to be right. Since peace and truth go hand in hand as I explained, if we could increase peace and unity throughout the world on every level, then automatically, we would also begin to increase truth in the world. Each one would be able to discuss the truth with his fellow, and together, they would all start to get rid of the lies they are attached to. Instead, they would search for – and find – the truth!

As I discussed in the previous article Fighting is  Absolutely  Forbidden,  you always lose by fighting. One way or another, you still lose, even if you seem to win – and that’s the best case scenario. The worst loss of all of them, is that because G-d hates fighting, He removes His Divine Assistance – and without that, the situation is certainly going to deteriorate even further. In fact, the word machloket in Hebrew can be broken up into the words “chelek met – a portion dies.” Fighting never brings life, because it is connected to death. Rather, all sorts and forms of Hell have power over the people involved in an argument or controversy.

Therefore, remind yourself every day of the words of the wife of On ben Pelet, as I explained in Review the Risk Profile First: What do you stand to gain?! Don’t you see that you’re only losing by putting yourself in the middle of a controversy? Be very strong and decide that you will absolutely not take any side in any form of strife, argument or controversy! It doesn’t matter what you heard, what you read, or what the truth seems to be! Resolve firmly not to have any part of it – because you’ll only lose!

I remind you again: Fighting is death, and peace is life. If you want life for yourself, for your family, and for the world, and if you want the real truth – stay far away from arguments, fighting, and controversy! Don’t listen, don’t talk, don’t read and don’t comment – not in person, and not online!

Instead, have mercy on everyone, and pray for everyone to be saved from all arguments, and to connect to peace, and to truth. In doing so, you actively choose to take a big part in saving the world, and bringing the Redemption with mercy, and reveal Moshiach who is called “The Prince of Peace,” soon and in our days, amen! 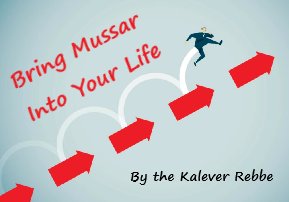 How can we protect ourselves in this era of pervasive heresy and promiscuity? It seems that no place is “safe” - except for one...
Never miss new articles!

Bring Mussar Into Your Life

6 min
A Spy in Enemy Territory

Author: Simmy Horwitz Working for the FBI would be a little stifling for me. I'd have to do years of training to meet their qualifications, and I'd have to work in an office with tons of people.  Sometimes you have to take a little bit of a pay cut in order to enjoy a great quality of life. Let me lounge on the couch with my hot cocoa and work whenever I want, you know?

New at the Breslev Israel store!   A red kabbalah bracelet with a beaded silver hamsa. Nadine Jewelry.   A special gift item! Treat yourself and your loved ones!

Tefillah for an Easy Birth – Segula

A unique prayer (in Hebrew) as a segula for easy birth.   "With the conductor" psalm in the shape of a lamp embossed on a gold-colored metal rectangle. Around the purple edges are Star of David decorations. The segula comes in a velvet case with gold lettering.   In addition, a segula is printed for livelihood with the key to livelihood and traveler's prayer.   Put the blessing in the house, bag and pocket!   Size: 8 cm.

Start over – Rabbi Nachman of Breslev (Spanish only)

This book will provide you with solutions, advice, and incentives with which you can overcome and resolve the various dilemmas and conflicts that are presented to you daily. Spanish only.

Windows to the Soul

"Delve in the Torah and continue to delve in it, for everything is in it... you can have no better portion than it."  So teaches the Talmudic sage Ben Bag Bag in Ethics of the Fathers (5:26). More easily said than done. One way to appreciate the infinite wisdom of the Torah is to see what thoughtful, inquisitive, perceptive people have unearthed in their inquiries. This is such a book.   Rabbi Michael Bernstein, M.D. is a practicing child psychiatrist and the director of child and adolescent psychiatry at the New Horizon Counseling Center in Queens. His is a craft that teaches its practitioners to notice things that others overlook. In this book, he turns his skills to the Chumash and , like an explorer stripping away covers from ancient treaures, he reveals wisdom and insights that may well have escaped even lifelong students of the Trorah.   Hardcover, 256 pages. Artscroll.   Original, provocative and stimulating! Order today!