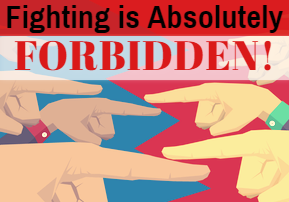 In the Gemara, Reish Lakish mentions that  Moshe  Rabbeinu  didn’t think about his honor at all – he only worried about how to end the conflict with Korach. He was the Admor of all the Admorim, the King, the leader – and he only cared about how to make peace. Moshe taught us all the Torah, so of course he knew everything. Moses knew that to be involved in controversy is forbidden by the Torah. Moshe himself never fought or argued with anyone, not even Korach and his assembly. Even if someone is arguing with you, you still have a mitzvah to not fight back with him, and instead, to mimic Moshe Rabbeinu and find a way to make peace!

OK, so you have this problem, whatever. You have to analyze the problem and see what is the most important, and what is secondary. Making sure to have peace – that is the most important! You have to decide with absolute conviction: I am not prepared to lose shalom (peace) at any cost! You must tell yourself, “I am holding onto the trait of shalom. I love everyone. Now, I am going to search for a way to solve this problem, without letting go of shalom.”

How many times in my life did the Evil Inclination try to tell me, “You have to be strong with this!” And I responded, “No, everything with love. I am not prepared to let go of peace no matter what.” And everything worked out so well in the end. If G-d forbid I had listened to the Evil Inclination and not been strong in peace, who knows what would have happened.

I want you to understand that when I say that we all want shalom – shalom means perfect love and unity between the parties. It does not mean a cease-fire! For instance, when it comes to shalom bayit – marital peace – we don’t just want peace and quiet between the partners. We don’t want them to just not fight. That isn’t peace – it’s a cease-fire. So too, we don’t just want quiet within the Jewish people and in the world as a whole. OK, the truth is, that zero would be just fine compared to the current situation – very good indeed. But that isn’t our real desire. We want real shalom – peace, love and wholeness in the Jewish people and the entire world.

If there was to be unity among the Jewish people, even if they were sinners, nothing bad could happen. The most important thing is that there shouldn’t be any separation between the Jews, and no different groups within the Jewish people. There should be only love!

The Pele Yoetz writes that all of these divisions among the Jewish people – all these concepts are nothing. We are even in Israel. We aren’t in exile anymore! Wherever there is real yirat Shamayim (fear of Heaven), there is love within the Jewish people. If there isn’t love between Jews, then there is no fear of Heaven.

Nothing matters anymore! What hat you wear, or type of kippah, or type of jacket, it’s all foolishness! It doesn’t matter who you are, or what city you live in, or whether you are Ashkenaz or Teimani or Persian or German or whatever. This is why King David was said to have “beautiful eyes,” because he only saw the good! That is why he is Moshiach! He loved all of the Jewish people!

What really matters is only emuna, happiness, love, peace and unity!

You don’t need to be wise to know that this is the truth. Once again, let me explain it to you: There is no such thing as being strong in truth, and also being involved in machloket (arguments and fighting). Someone who has the trait of truth doesn’t have anything to do with any controversy – ever! Only peace.

It should be Hashem’s will to know that peace is the most important thing in this world.

A reader asks, “Are Kameas allowed?” Are they some sort of magic or Avodah Zarah? Where do they fit into Breslev tradition? How can you properly use them?

5 min
All in The Name

3 min
Bring Mussar Into Your Life

Living Each Week Thoughts and ideas on the weekly Torah portion by Rabbi Abraham J Twerski, MD, based on the popular format of his book designed for daily study: Living Each Day. By Rabbi Abraham J. Twerski. Artscroll, Hardcover, 464 pages

A challah cover that is elegant and spectacular in its beauty, adorns the Shabbat table and gives it a quality and prestigious look.   The cover is silver-white imitation leather with elegant "Shabbat" embroidered along the side.   Size 42x52 cm.   Enjoy luxury and quality at a price not to be missed! Also suitable as a gift!

Indepth and comprehensive essay of the halachot of Shabbat candles and Shabbat challot. Their details are accompanied by colorful pictures.   By Rabbi Daniel Haim Adas, Shlita

This round, stainless steel pendant is inscribed with one of the most important verses in the Torah: "Hear O Israel, the Lord our God, the Lord is One". The pendant hangs on a delicate black stretchable necklace. Suitable for any occasion and a unique gift! Do not miss out! Now specially priced!