Dr. Emuna: Every Healing Has Its Time 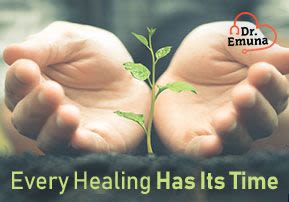 Last week, we learned that you can heal with emuna, as long as you Check Your Pulse.

Now we are moving to the next rule in applying all the wonderful tools which will follow: Just like you cannot push your level of emuna, you also cannot push the time of the salvation.

Part of the emuna necessary to bring the blessing of healing, is the recognition that right now, Hashem wants me to have this illness! Again, the illness might be physical, or could be a problem with anxiety or depression, an unhealthy relationship, or whatever. Whatever it is, it comes from Hashem!

Therefore, “in the meantime” while we are awaiting our salvation, we cannot be anxious about it. Rather, we must wait patiently. Keep praying, and keep thanking, and keep doing teshuva, and keep strengthening ourselves in that the foundations of emuna, and especially that Hashem loves us with an infinite, unfathomable love, and eventually we will see clearly with our own eyes how this was for the very best. But part of the humility necessary is recognizing that since we cannot see the whole picture, we therefore do not know when the time is really good for the problem to go away. As long as it’s still here, we are choosing to be happy, filling ourselves with gratitude for everything that we do have and whatever is healthy, and letting go of the rest. Truly, we aren’t in control anyway, so it’s our choice to be happy and filled with emuna which brings down the healings, or G-d forbid, push in all sorts of ways to make the healing happen how and when we want it, and end up making everything worse.

Let me share a personal story which I hope will bring the point home, which just happened to me a few months ago. I have a particular health issue that a top doctor told me required elective surgery to fix (meaning the problem wasn’t dangerous, just painful). Otherwise, I would never be free of pain in that limb. In fact, I couldn’t even touch the affected area without crying out in pain! It took time, a lot of prayer, a lot of teshuva, and a lot of thanking – I never had the surgery and now I have no pain thank you Hashem!

The problem was that I still wasn’t happy because even though the pain was gone, everything was still not “back to normal.” However, instead of appreciating the miracle that Hashem had done for me, and continuing to pray as I had done until then and not push to be totally healed and functioning normally, I wasn’t happy. I wanted a complete healing already! (Mind you, this was really subconscious. I told myself to be grateful, but deep down, I wasn’t satisfied).

So, I tried something that is supposed to have no risk, was relatively inexpensive, and generally works well for issues of this type. And I saw significant improvement!

The problem is that the body is an extremely carefully balanced, brilliant machine. And Hashem wanted me to learn my lesson. The treatment inadvertently brought out a completely different problem, which had always been very minor but suddenly became serious. I was in and out of the emergency room a few times, one time by ambulance because I couldn’t get there on my own. So now, I had to do the same emuna work that I would have had to do on the original problem, except that now the situation was much scarier than the original situation had ever been. I longed to be back to “just” the original problem. Just like Rabbi Arush teaches, that anything done “with the might of my hand” is bound to make the situation much worse, not better.

With lots of prayer, I realized that I pushed the time, and didn’t wait patiently for Hashem to save me. I did teshuva, and I found lots of other hints Hashem was sending me of other things to work on as well. I worked on myself to [be] grateful for the entire sordid situation and not blame myself, because after the fact, even our mistakes are from Hashem. I was told to expect even a basic healing to take a long time. I begged Hashem to enable me to do complete repentance – to be in the same situation but this time, to act differently and not push the healing. In the end, the problem went away almost as suddenly as it had come, in a clearly miraculous fashion.

I saw clearly what Rabbi Arush teaches, that when we have woken up in all the ways we need to, Hashem can stop knocking. He does not make His creations suffer needlessly! The same Hashem who created this sickness, also created its healing – and created it first! You don’t need to convince Him to heal you in whatever ways you need – you just need the simple emuna to know that He loves you more than you could ever imagine, and already wants to heal you more than you could ever imagine, and will heal you – when it is the right time that will be good for you, in this world and the next. 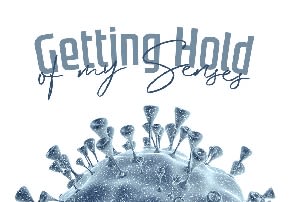 After my bout with Corona, I was “over it” but I suffered from headaches, fatigue, lack of taste, smell and more. What I learned in the process is priceless!
Never miss new articles!

Dr. Emuna: You CAN Heal

5 min
Speaking to the Pain

3 min
Getting Hold of my Senses

Dr. Judith Loren, top cadiologist at Brookly's Fairmount Hospital, is busy with high profile surgeries and consultations around the clock. But when she encounters a terminally ill patient with a multimillion-dollar legacy, Judith must decide upon the fates of three orphaned Jewish children - as well as her own destiny.   With World War II raging across Europe, Joseph Laviers makes a difficult decision that ultimately saves his daughter's life. Upon his return to claim her following the war, the dedicated father and survior discovers the unthinkable. Will he ever be whole again?   A spellbinding tale that leads us to ponder the meaning of love and family - and reconsider the stigmas and convention in our lives.   By Ruth Arieli Rapaport. Hardcover, 530 pages, Tfutza Publications.

Table of blessing of foods, in alphabetical order, according to the customs of all communities, in Hebrew and English.   Hardcover.   Author: Rabbi Avraham Chaim Ades

An old time favorite! A braided red Kabbalah bracelet that holds a Star of David and a blue-colored eye. Suitable as a gift for any occasion! Loved by many! Now at a special price!