Once we understand that everything is a free gift from Hashem, now we can let go of the questions and start focusing on the emuna, and now come the miracles... 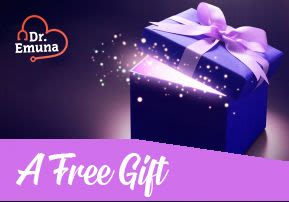 In the last couple articles, we learned that although every healing is possible with emuna, we still need to Check our Pulse and act according to our level without pushing ourselves, and also know that Every Healing has its Time and not push the time of the salvation either.

Now, we’re going to build the foundation further with the principle that “I don’t deserve a thing!” In Hebrew, lo megia li klum. The flip side of this rule is: Hashem doesn’t owe you anything – everything you do have is a free gift just because Hashem loves you and wants to give you, even more than you want to receive.

The humility of recognizing that Hashem doesn’t owe us anything can help us attain a state of emotional balance and health. Gone is the jealousy of others. Gone is the self-flagellation of wondering: “What is so bad about me?” Gone is the pain of unrealized expectations. Even more, Hashem showers us with blessings!

Everyone loves to hate arrogant people who think they have everything coming to them. However, while those extreme examples can certainly help us understand just how revolting this character trait is, under the right circumstances just about everyone sometimes thinks to themselves: “Why is Hashem doing this to me – I don’t deserve this!” This feeling is generally followed by questions: “Why don’t I have X?” or “Why don’t I have Y anymore?” or “Why does my neighbor have Z and not me?” or even “What did I do that was so bad?”

What we don’t always realize is that these thoughts are arrogant thoughts. These thoughts are based on expectations of ourselves as if we are something and deserve something, as opposed to the truth that we are just little creations which Hashem sustains in His love and mercy. I have experienced this lesson multiple times, but one time in particular stands out in my mind…

I clearly remember being in the ER with preterm contractions with baby #2. I was only 17 weeks. I wasn’t even admitted to the delivery ward to be checked – the fetus isn’t even considered a baby to deliver until 20 weeks. So I was in the regular ER getting fluids, being told that I was probably miscarrying, and they weren’t even going to try to do anything about it. I was sent home and told to come back when I started bleeding.

The entire way home, and the next few days, were spent mostly with these same questions: “What is wrong with me, and what did I do so wrong?” First I gave up everything I knew to change my life completely and start following Torah and mitzvot. Then I gave up everything familiar to move to Israel. And and and. Why did I deserve this?

Until I remembered that in those days in the hospital pregnant with my first baby (same problem, only difference was that the first time around I was over 20 weeks), my trusted companion was The Garden of Gratitude. So I opened it up again and what did I read about? You don’t deserve anything! I read that even Moshe Rabbeinu did not rely on his outstanding merits and only requested a free gift.

Now I understood. If even Moshe Rabbeinu didn’t deserve even a little something – then what, I deserve anything at all?! It isn’t at all about my good points, of which there are plenty in all of us. Every single Jew is filled with good deeds like the seeds of a pomegranate! But who says I deserve an easy pregnancy? Heck, who says I deserve another child at all? Hashem doesn’t owe me anything! Our merits are merits, and they are wonderful, but they don’t buy us anything. Everything is a free gift. And might I add looking back at things I was doing during that time of my life – I did not at all recognize the mistakes I was making and remember another cardinal rule of emuna: “There is no suffering without sin.”

Once we understand that everything is a free gift from Hashem, who doesn’t owe me, you, or even the greatest tzaddik anything at all – now we can let go of the questions and start focusing on the emuna and the gratitude. Now we can work on saying thank you for all the free gifts that we do have, and stop looking at what someone else has that we don’t. Now we can open ourselves to the humility that Hashem is the Creator of the World, and only He knows what is truly best for us in the long run, what our spiritual rectification is, and how to achieve it.

And now we start opening the gates of blessing and salvation. Someone who says “thank you” is given more reasons to say “thank you” because they show that they appreciate what Hashem has given them, and aren’t taking anything for granted. On the flip side, someone who prays based on his merits, has his merits checked, and inevitably is found lacking.

If that isn’t enough, when someone prays with the humility that they don’t deserve anything, and relies on the emuna that Hashem loves them and wants to give them a free gift because He is full of mercy instead of relying on his merits: their prayers are answered specifically because of that emuna!

A Jew has to “breathe” the weekly parashot. He must live the parasha, study it, and search for hints in his own life and reality.

3 min
Should You Take Medication?

6 min
Getting Hold of my Senses

The Rebbe on Beacon Street

"Do you know where I can find a place to stay for Shabbos?" "Sure. Go to the Grand Rabbi on Beacon Street. He always has room for one more."   He came from a long line of chassidic leaders, reaching all the way back to the Baal Shem Tov. He was the son of the first Bostoner Rebbe, Rabbi Pinchos Dovid Horowitz. He was a brilliant Torah scholar, having learned at Mesivta Torah Vodaath under one of the greatest roshei yeshivah of that time. And yet in his profound modesty, Rav Levi Yitzchok Horowitz did not see himself as a rebbe.   Hashem, though, decreed otherwise. When a small group of his father’s followers pleaded with Rav Levi Yitzchok to come to Boston and lead their shul, he acquiesced. And in the next sixty years, he and his devoted rebbetzin would change the lives of thousands. As rav of his kehillah — which included influential professionals and intellectuals, a dynamic leader of the Boston Jewish community, and Shabbos host to scores of searching college students, the Bostoner Rebbe was a pivotal figure in the flourishing of Torah life in America in the decades after World War II.   In The Rebbe on Beacon Street you will read of the Rebbe’s wisdom and warmth, of his burning desire to help every Jew who came his way, both physically and spiritually. Like Avraham Avinu and Sarah Imeinu, the Rebbe and Rebbetzin on Beacon Street opened their homes to all: everyone was welcomed and treated like family.   Among the Rebbe’s greatest achievements was his founding of ROFEH International, an organization dedicated to providing medical referrals and support services to sick people and their families.   When already in his mid-60s — when many are beginning to contemplate retirement — the Rebbe founded a new community with the opening of a shul in Jerusalem’s Har Nof neighborhood. For the next two decades, he would spend six months a year leading and developing a Bostoner kehillah in Eretz Yisrael, while continuing to be a father figure to his flock in Boston.   Come and meet The Rebbe on Beacon Street. As you bask in the glow of his overflowing ahavas Yisrael, you will feel inspired. Enlightened. Transformed.