Vladimir Melnik, a tour guide from Breslev in the Ukraine, is also the caretaker of Rebbe Natan's holy gravesite just like his great grandparents were…

Editor's note: Our dear friend Vladimir Melnik is a tour guide who lives in the town of Breslev in the Ukraine. He is also the caretaker of Rebbe Natan's holy gravesite.

Please excuse my English, but I will speak mostly to you in pictures, sharing with you the Breslev that is so steeped in history and that means so much to all of us. 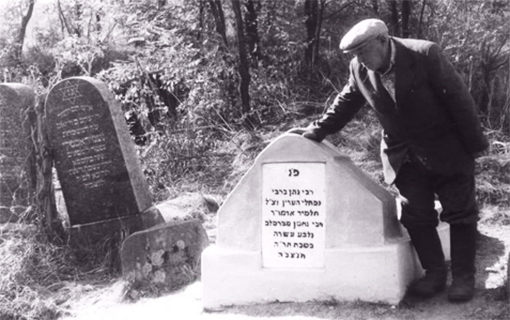 Now, I'd like you to meet my great grandparents, Yifram and Lidia Serol. They were not only the caretakers of Rebbe Natan's grave, but they saved many Jews in World War II: 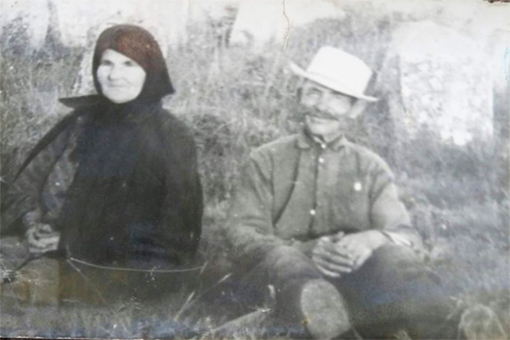 This is the certificate that "Yad Vashem" honored my great grandparents with, awarding them the title, "Righteous of the Nations": 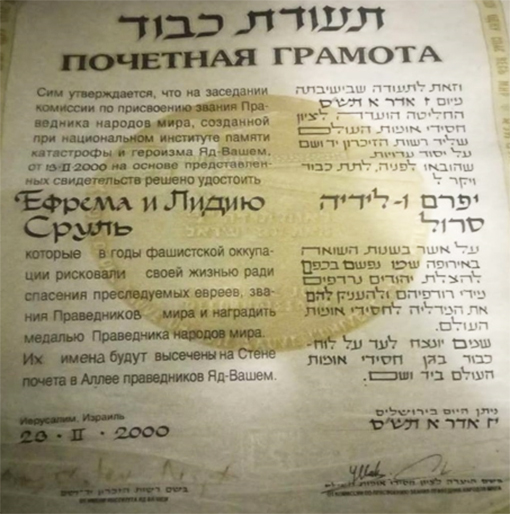 Lidia and Yifram rescued three Jewish children from a Nazi death camp at the village of Pechora, 18 kilometers from Breslev. They also hid those children in their home for three years, at great risk to themselves. Not only that, but Yifram buried the bodies of the murdered Jews in the new Jewish cemetery in Breslev. Here's what the monument of the communal graves looks like: 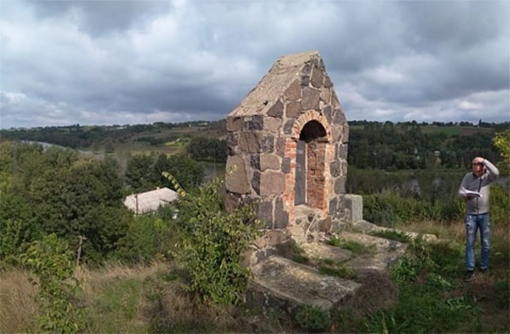 I am active in the Museum of Jewish Life and Holocaust, where we teach pupils about Jewish lifestyle and history her in Breslev. We also search for places where Nazis killed Jews and put up memorial monuments. So far, we have found five places near Breslev and we are still working. Here is a picture of me at the entrance to the museum: 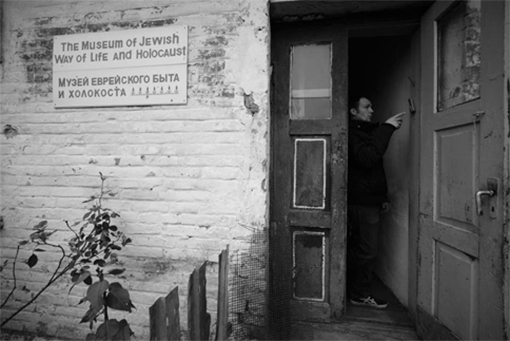 Did you know about the pogroms in Breslev of 1917-1921? Hundreds of people were killed by bandits and soldiers from all sides of the civil war, with the Jews suffering from everybody. We have a list of 390 victims and where they are buried in the cemetary, but many of the stones are broken. You know the beautiful building on the Bugg River below Rebbe Natan's gravesite? Its owner was Jewish, and he was killed in the pogrom of May 7, 1919.

I would love to show you around historic Breslev and the Ukraine.

If anyone comes to Breslev, I will be happy to guide you. Call me at +380639818990. If you come to Breslev on your own, you can find me for my house is the first one after the cemetery on the mountain. Your friend, Vladi

From the Editor's Desk: Can we contact you by phone? You can post it here in a Comment, but we will not publish it. All the best!

Where can I find lists of people killed from Breslav My great grandparents and their children lived there. I am Named after two daughters but we don’t know what happened to them. Who can help me. Thanks. Noa

my great grandfather was from bratslav

Yosef Feldman. I have a yiddish letter from him from 1917, most of my ancestors moved to the states, for some reason he stayed. He speaks of the pogroms and peter's death. no idea what happened to him...

The holy Baal Shem Tov departed from this world on Shavuot 5769 (1750). He is the father of the Chassidic movement and great-grandfather of Rebbe Nachman…

3 min
A Visit to The Baal Shem Tov

Luxurious tallit-tefillin bag in black imitation leather, with a large handle for pleasant, light, and comfortable use.   Size 37 * 43 cm.   A perfect and beautiful bag! Also suitable as a gift!

Magnet with an emuna saying from Rabbi Arush. A colorful magnet for your fridge or computer!

New at the Breslev Israel store!   The Tanach, newly published by Dani Books, in a bright and clear font.   Order today!