The holy Baal Shem Tov departed from this world on Shavuot 5769 (1750). He is the father of the Chassidic movement and great-grandfather of Rebbe Nachman…

Yisrael Ben Eliezer, later known as The Baal Shem Tov (The Master of the Good Name), was born on the 18th of Elul 5458 (August 27, 1698) to Rabbi Eliezer and his wife Sarah. They lived in the small village Okup on the Russian Polish border. Both Rabbi Eliezer and Sarah were already very old when their first child, little Srulik (Israel) was born.

The days passed quickly and when Srulik was only five years old, his father Rabbi Eliezer died. The last words his father said to him were “Israel my son, you have a very holy soul, don’t fear anything but G-d”. Soon thereafter, his mother Sarah also died.
Young Israel, now an orphan, was adopted by the local community and educated as was common in Jewish communities at that time. That is, he probably learned to read Hebrew by four, to translate the bible from the original at five, and began Talmud at about eight. By the time he entered his teens, he was probably fluent in both Bible and Talmud.
The tradition is that young Israel was different from other children. He would often go into fields and woods and mountains, spending many hours alone, speaking to G-d. Not having parents, it’s not surprising he would go into nature to seek out his Father in Heaven. At an early age he was aware of the presence of G-d in all aspects of life.
When Israel entered his teens, the community’s responsibility for him ended and he had to begin supporting himself. First, he was hired as a school assistant because of his way with children. He was known to sing psalms and other songs with the children as they walked to school. He would also tell the children stories and teach them how to daven (pray).
Israel’s next position was that of a caretaker at the local synagogue. His main duties were to clean the synagogue and arrange the books. This gave him the time to study and develop. Late at night, when everyone was gone from the study hall of the synagogue, he would study the large tomes of the Talmud, Midrash and Jewish Law. Probably, he also studied Kabala, as was common in those days. He developed a great expertise in these areas. This expertise was later spoken about by his students and appeared in his teachings. Young Israel was said to sleep during the day when he had nothing to do. The local people thought he was not very smart.
Then the son of Rabbi Adam, the Baal Shem brought him the sacred tome of the Jewish spiritual teachings. After studying for a time with the Rabbi’s son, the latter died and Israel moved to a little town near Brody.
There he was employed as a teacher of young children. He became acquainted with Rabbi Ephraim of Brody who became aware of Yisrael’s spiritual greatness. Right before Rabbi Ephraim’s death, the Rabbi arranged for the engagement of Israel to his daughter Chana.
When Israel came to Rabbi Gershon of Kitov, Rabbi Epraim’s son, requesting the hand of his fiancée, Rabbi Gershon thinking that Israel was a peasant, tried to throw him out. But, when Israel produced a letter of engagement signed by Rabbi Ephraim, he called Chana and asked her opinion. After Israel spoke with Chana, no doubt telling her who he really was, she agreed to the match. Even though Rabbi Gershon disapproved of the match, he allowed them to marry and sent them away with a horse and wagon.
The bride and groom moved to a mountain village called Kutty between Kitov and Kasov in the Carpathian Mountains. This little village was also not far from Brody. Israel spent the next ten years praying and studying with an angelic mentor, Achiyah HaShaloni. Achiyah HaShaloni was among those that left Egypt with Moses and was a prophet during the reign of King Dovid. Achiyah HaShaloni initiated Yisrael into the mysteries of the Torah.
For a time, Israel was a shochet (ritual slaughterer) and teacher in Koslovitz.
Israel and Chana had two children, Edel and Tzvi Hirsch.
Rabbi Israel first revealed himself to the world on Lag BaOmer, 5585 (May 22, 1734). Then Rabbi Israel moved to Talust and became famous as a holy man. Next he moved to Medzibusch in Western Ukraine for the remainder of his life.
In Medzibusch, his fame spread and students attached themselves to him. Not only were ordinary people attracted to him, but some of the greatest Rabbinical luminaries also joined with him.
Although very few documents written by Rabbi Israel still exist, many stories and teachings have been passed down to the present time.
He became known as the Baal Shem Tov – the Master of the Good Name. 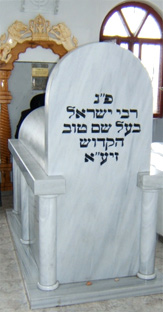 As Rabbi Israel’s fame spread, so did an opposition (Misnagdim) begin to grow.
Being a living legend, the Baal Shem Tov spent most of his time in worship, serving G-d, teaching his disciples, and giving blessings to the thousands that came to see him.
The Baal Shem Tov passed away on Shavuos, 5520 (May 23, 1760) having founded the Chassidic movement that lives on today.
***
Tzvi Meir Cohn attended Yeshiva Hadar Hatorah in Crown Heights, Brooklyn after completing his university studies in Engineering and Law. While studying at the Yeshiva, he discovered a deep connection to the stories and teachings of the Baal Shem Tov. His many books about the Baal Shem Tov can be found on Amazon. He can be contacted at howard@cohnpatents.com.

The couple didn't believe in the power of tzaddikim and miracle-working rabbis, but what could they do? Their daughter had suddenly became paralyzed…

A lovely Torah scroll for children in honor of the holiday!   A unique, colorful Torah scroll, "Ashkenazi" version. Made of fabric in shades of blue, purple, light blue, red, and green. In the center a "crown" is embroidered in gold with the two "tablets".   Size 27 cm.

Handwashing cup from aluminum. Printed on the outside are the Hebrew words for "Handwashing", "Health", "Peace", and "Good Fortune". Color: Brown tones

Aneni: Special Prayers for Special Occasions A wonderful supplement to the siddur, filled with prayers for the entire range of experiences written by our Sages. Vowelized Hebrew with Spanish translation facing. Highly recommended! Spanish

IT'S A KIDS' WORLD AFTER ALL  Vol. 5 The individual world of each and every child is a magical one, a fascinating tapestry woven with endless opportunities for growth. You Can't Buy a Friend is the story of a rich boy who feels the need to 'buy' the one thing he lacks--friendship.  The day comes when he discovers that real friends can't be bought, not even for all the money in the world! Dumb Thoughts of a Genius is the touching tale of a below average student who has an important lesson to teach many a school genius! The Golem Who Lost His Teeth is the hilarious narrative of a kid with an irrational fear of the dentist's chair! These stories are heartwarming, humorous, true-to-life, well written, and beautifully illustrated.  They will keep kids of all ages turning the pages until the very end! A must read!! By Don Melech

Tallit and Tefillin Cases “My Fire”