The Erev Rav today could have the best pedigree, the most thorough Torah education, the longest beard; so how can we even begin to recognize and avoid them? 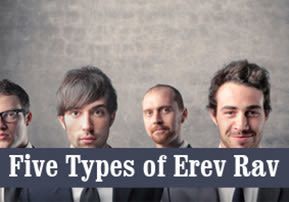 The Five Types of Erev Rav    The Zohar explains that there are five categories of Erev Rav:     1) The Amalekites – who makes themselves leaders by force, and are scourges to Israel     2) The Nefilim (or 'fallen ones') – who fall into fornication with fair women     3) The Gibborim ('mighty ones') – these men build synagogues and yeshivot and place in them Torah Scrolls with rich ornaments, but they do it not for the sake of G-d, but only to make themselves a name     4) The Refaim ('weak ones') – who if they see Israel in trouble, abandon them, even though they are in a position to help them, and they also neglect the Torah and its students in order to ingratiate themselves with non-Jews.     And lastly;     5) The Anakim ('giants') – who tend to bring the world back to the state of 'tohu vabohu' and they caused the destruction of the temple.     Practically speaking, this is where Rebbe Nachman’s approach of acknowledging and eradicating Erev Rav character traits really starts to come into its own, because none of us are perfect, and at least occasionally, we’ll all be guilty of behaving in a way that’s typical of the Erev Rav.

The authentic Jewish approach to overcoming these negative character traits is to:

1) Acknowledge our wrongdoing on some level.

3) Ask Hashem to help us to change, because we have the humility to know that we can’t do these things by ourselves.     By contrast, if we fail to accept any suggestion that we’re doing anything wrong, and we try to justify our evil deeds with lies, evasion, intimidation and other manipulative behaviors – that’s a sign that we really need to up our hitbodedut, (personal prayer) in order to get a grip on the Erev Rav character trait of brazenness.

Again, it’s crucial to remember that there is no despair in the world, and that even if we suspect that we do have some Erev Rav character traits, all we need to do is to acknowledge them, make a list of them, and then work through each one in hitbodedut, asking Hashem to help us eradicate them.

What other types of negative behaviours are typical of the Erev Rav?     In his book Even Shlema, the Vilna Gaon writes that the selection and purification of Israel will not be complete until the Erev Rav seperates from Israel completely. The Vilna Gaon (or some say, one of his students) then explain that:     “And the five types of Erev Rav are:     1) Those that create strife and talk lashon hara     2) Those who pursue their desires, like prostitution, etc     3) The swindlers who pretend to be tzaddikim, but their hearts are not straight     4) Those who pursue honour and build great synagogues to make a name for themselves     5) Those who pursue money and strife”

The 'Brazen-faced' of the generation    In Sifra DiTzniuta Chapter 1, the Vilna Gaon also explains that:     "The entire 974 generations (as brought down in Chagiga 13b, as mentioned above) which are the 'Erev Rav' which are the souls from the world of chaos (TOHU), G-d transplants them every generation, and they are the brazen-faced of the generation. Our sages said that in the period of 'Mashiach's footsteps' impudence will become great…and the Erev Rav will return to be the leaders of Israel."     Next week: More clues about the Erev Rav from our morning blessings, the Yom Kippur davening, and King David

This was great. I found the different categories and their descriptions very helpful. It's great to have a guide to know how to identify them and, very importantly, how to avoid getting caught up in their net. I'm looking forward to the rest of the series.

Our society today accepts evil behavior that was once totally rejected. Although social mores have changed drastically, Hashem's judgment still discriminates between good and evil.

The Force of Deception

Travels with the Maggidim – Winning the War

This is the fourth book in the series "Travels with the Maggidim". Four wonderful stories with important messages about how to strengthen our avodat Hashem by helping us overcome the twisted, sneaky ways of the yetzer hara.