There are those who are great apostates and heretics, but they do not reveal their heresy, and people are not aware of the need to guard themselves from them... 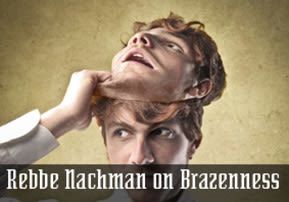 In his work Sefer HaMiddot (the Book of Traits) Rebbe Nachman writes the following about 'brazenness':    * Brazenness is caused by anger    * Brazenness prevents a person from accepting rebuke    * Brazenness causes stubbornness and attests that one has not rectified the sinful ways of his forebears    * When an evildoer acts brazenly towards an upright man, this is only so that the upright one will examine his deeds.    * Brazenness causes the rains to be withheld. Also, a brazen person has certainly stumbled in a sin, and will stumble in more sin. It is permitted to call him 'wicked' and to hate him, and he is from the 974 generations that preceded the Creation. (This is another link between 'brazenness' and the Erev Rav, who the Vilna Gaon told us previously are from the 974 generations.)    Now that we know that Rebbe Nachman equates 'brazenness' with 'wicked', let's see what he writes elsewhere in Sefer HaMiddot, about 'Avoiding the Wicked':    * Avoid the wicked, so that you will not be caught up in their punishment    * To avoid enmity, one may display friendliness to the wicked    * It is forbidden to praise (evildoers)    * One who judges a wicked one favorably is also considered wicked    * Even when an evildoer does some act according to religious law, we do not depend on him    * If you do not become attached to known liars, you will merit discerning who hypocrites are    * One who hates the seducers, their words will certainly have no influence over him    * Torah learning will shatter the friendship of the wicked    * One who keeps his distance from the wicked, G-d grants him salvation    * Do not speak to seducers, even to chastise them or bring them to repent    * Associating with the wicked is damaging to the service of G-d    * One who does not understand the wickedness of hypocritical evildoers is abhorrent (to G-d)    * There are those who are great apostates and heretics, but they do not reveal their heresy, and people are not aware of the need to guard themselves from them. However, through conducting oneself modestly, one is saved from these heretics.    * The wicked do not confuse us in our holy service through their sins, as they do through the good deeds they do.    As the above sources make abundantly clear, Rebbe Nachman really knew what he was talking about, when it came to identifying Erev Rav characteristics etc. But this wasn’t the end of the story. Rebbe Nachman wrote Sefer HaMiddot before his Barmitzvah; he then spent the next 25 years, before his death in 1810 at the age of 38, to finding a way of rectifying the spiritual ‘problem’ of rectifying the Erev Rav.

Likutey Moharan is full of a number of astounding lessons that deal directly with this subject. While we can only dip in, in the most superficial way, to Rabbenu’s teachings in these posts, hopefully we can still glean some insights that can change the whole picture.

Let’s start with Lesson 1:282 – popularly known as Azamra. There, Rebbe Nachman tells us:

“Know! One must judge every person favorably. Even if the person is totally wicked, one must search and find in him some bit of good, regarding which he is not wicked. By finding in him this bit of good and judging him favorably, one actually elevates him to righteousness and is able to bring him to repent.”

Earlier, Rebbe Nachman himself equated wicked people = Erev Rav, so here, he’s telling us that Azamra even (or probably, especially) applies to the wicked people in our lives.

Next, let’s jump over to Rebbe Nachman’s tale of ‘The Water Castle’, (part of the story of the seven beggars). Commenting on this story in Chapter 2,  Hilchot  Pesach,  Likutey  Moharan,  Rav Natan tells us:

“…the Egyptian exile…resulted from Adam’s wrongdoing. He sinned in regard to the Tree of Knowledge, and he caused [further] spiritual damage due to seminal emissions. [A reference to Adam’s ‘spilled seed’ that contained the souls of both the Nation of Israel, and the Erev Rav].

“Consequently, in order to repair the damage caused by Adam’s wasted seed, the Israelites needed to be purified in Egypt [as brought by the Arizal]….

“…which is why our Rebbe [Rebbe Nachman] revealed that we should recite the Ten Chapters of Psalms that he specified. These ten psalms…[are] a Tikkun for the damage caused by seminal emmissions.”

To put this another way: reciting the Tikkun HaKlali rectifies Erev Rav character traits at their spiritual root, in the sin of Adam HaRishon.

Rebbe Nachman himself tells us this explicitly, in Lesson 1:36 of Likutey Moharan, when he says:

“When a person accepts the yoke of heaven upon himself by reciting these verses [the Tikkun HaKlali], he encompasses his soul within the Twelve Tribes of God and separates his soul from the souls of the Erev Rav.”

There’s a lot more to say about this, including how going to Uman for Rosh Hashana also helps to ‘release’ any Erev Rav soul sparks that have been captured by the realm of evil (as set out in Lesson 2:8 of Likutey Moharan) – but the key point to take away from this post is that by the end of his life, Rebbe Nachman had found a way to spiritually rectify the Erev Rav souls sparks that each of us contain, via:

Next week, we'll look at how Erev Rav character traits are delaying the arrival of Mashiach and the full redemption of our people. 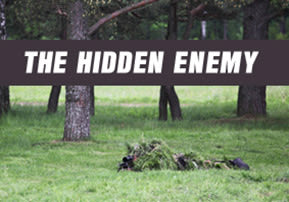 The Erev Rav are the recognizable ones who are always looking for 'natural' explanations for everything that happens in our lives, that cuts G-d out of the picture...

Hidden Treasures-How to Realize Your Potential

Hidden Treasures What made Rebbe Nachman different from many other Chassidic masters was his ability to access the mysteries of the Kabbalah and extract practical advice for living life to the fullest. Here the Rebbe elucidates one of the first secrets of Creation – how God went about creating the world as we know it – and applies its lessons to our own quest for physical, financial, emotional and spiritual success. An invaluable guide for achieving personal greatness. A practical guide for using the energy of the Ten Sefirot in our daily lives, according to the teachings of Rebbe Nachman! By Chaim Kramer. Softcover, 184 pages.

• How did a young journalist create a revolution in the Israeli government -- by defending the honor of Shabbos? • What did the Pnei Menachem say about Yitzchak Rabin -- and how did his words eerily come true? • What is the inside story of the Iranian nuclear program -- and how is Israel managing to defend itself? • Could a Polish non-Jew possibly be Reb Yisroel’s brother, who’d disappeared during the terrible Holocaust years? For more than 50 years Reb Yisroel Katzover -- also writing for Hamodia under the name A. Pe’er -- has been one of Israel’s premier military journalists. As an observant Jew, he has often served as an unofficial liaison between the country’s military and political leadership and the nation’s gedolei Torah. As a pioneer in the world of Jewish music, he’s encouraged the careers of some of today’s most preeminent musicians. In this unforgettable memoir, we learn the inside story about the personalities that he’s met, the travels he’s taken, and the lessons he’s learned from a half century of journalistic adventures. As the “ultimate insider,” we hear stories that we’ve never heard before, that we never dreamed could be true. No one tells a story quite like Rabbi Nachman Seltzer, author of almost 40 books including the bestsellers Incredible! and Living Legend. Combine his unique storytelling talents with a man who has countless fascinating stories -- and you get a book that’s part thriller, part secret history, part inspiration -- and 100% excitement! Hardcover Pages: 430

One day a certain rosh yeshivah had a flash of inspiration. He thought to himself, How many times can I learn the same masechtas over and over?   Like many yeshivos, his yeshivah focused on the masechtas in  Nashim and Nezikin, and when they finished, they started the cycle all over again. So he came up with a plan. In the previous learning cycle, his shiurim had been recorded. The talmidim could listen to the recordings while he could spend that time learning all the masechtas he never had the opportunity to study.   He put the plan into action. Then, one day, he made a surprise visit to the beis midrash. From afar, he could hear his own voice, full of fervor, discussing the sugya aloud. Ah, the sweet sounds of success.   But when he entered the beis midrash, he found that it was completely empty.   And on each shtender...was a recording device.    Nothing can replace a live speaker, but this sefer - V'Higadeta on the parashah by Rav Yaakov Galinsky, zt"l - comes very close. Words that come from the heart penetrate the heart. As you read this book, you will feel your heart open, allowing the words - insightful, vivid, meaningful - to penetrate.

The Life-Giving Medicine – Stories about the Chafetz Chaim

Author: Rabbi Avraham Ohayun   Even as a young child in Zhetel, his righteousness shone brightly. Everyone knew that this boy had an extraordinary neshamah, and that he was destined for greatness.   But did any of the townspeople dream just how far little Yisrael Meir Hakohen Kagan would go; how he would change the Torah world with the sefarim that he wrote, the yeshivah that he led, and the example that he set?   Yes, this boy with the shining middos and outstanding yiras Shamayim grew up to become the holy Chafetz Chaim, whose name and teachings are constantly on our lips almost 100 years later.   In this book, you will read twenty-five remarkable stories about the greatness of the Chafetz  Chaim. Each story will astound you and inspire you to follow in this towering gadol's beautiful ways.   Beautiful stories to read to your children. Each story has a full-page illustration.   Hard cover, 54 pages