I thought I had the life of my dreams in America, but Hashem destroyed it. Instead, He gave me the life that I never dared to dream in Israel. 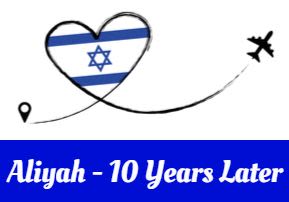 In the period before I made Aliyah 10 years ago, I wrote a few articles about coming to Israel, including The Ladybug and Longing to Get on a Jet Plane.

I realized that life in America was a dead-end. No matter how hard I tried to fool myself, Hashem eventually brought me to my knees and made me realize that I had it all backwards. I wanted to believe that my life was 80% spirituality and 20% physicality. After all, I was religious, kept Shabbat, kashrut, I learned on a regular basis, etc. and I lived in an average, run of the mill home with a standard car. No luxury, no frills.

But Hashem forced me to admit that my life in America was 80% physicality, and 20% spirituality. Only in Israel could I live a life where spirituality really came first. Where being Jewish really came first, and where I could live a Torah-inspired life to the fullest. Where I could fulfill the commandments on a level I never even imagined possible.

At the same time, I realized that I had been pushing my will for what I thought I wanted for my life, but my life just kept falling to pieces. No matter how hard I tried, everything failed after a year or two. It was enough already! I had read The Garden of Emuna by this point and realized that I wasn’t letting Hashem oversee my life. I prayed to Hashem, “I put myself in Your Hands. You know what is best for me. You know what I am supposed to do with my life. And your Dreams for me, are surely even bigger and greater than my own dreams for myself. I am done with being willful! You run my life; just tell me what to do!”

I got to a point where I was truly excited for where Hashem was going to lead me. I stopped pushing for what I wanted. Instead, I just prayed and let Hashem send me His leads.

Here’s a perfect example: When my financial situation got super tight and I still hadn’t found a job, I went to Hashem and prayed: “Wherever you send me a job, that is the city that I will move to!” I told Hashem that I really wanted it to be Israel and I really thought that was the best for me, but wherever He sends me – that's where I’ll go. The very next day I got a phone call from a friend with a job offer in Jerusalem!

My file had already been approved with Nefesh B’Nefesh. When I opened it only six months before, I thought maybe I could make Aliyah in 2 or 3 years. This is when I learned the rule: If you want to make Aliyah, open a tik with Nefesh B’Nefesh and fill it with PRAYERS! You might just be amazed at how fast Hashem will answer them! Besides myself, Baruch Hashem this formula has worked for many people since.

The explanation for the rule is simple: A tik means “file” in Hebrew, and that’s what NBN calls an application for Aliyah. But tik also means a backpack. Do the hishtadlut (physical effort) that you can do right now which is to fill out an application, and then keep doing your primary hishtadlut which is prayer. Get all the paperwork ready and approved; approval doesn’t mean you have to get on a plane at any defined date. More often than not, you’ll find that you’re ready not long after the paperwork is.

Since my file had already been approved, they were just waiting for me to say that I was ready. I called them and said: “I just got a job that wants me there tomorrow!” They looked at the calendar and said, “The soonest flight lands July 7. We’ll be pushing to get the visa ready, but we can do it.” I looked at the calendar: July 7 was my Hebrew birthday. Another sign from Hashem! What an amazing birthday present!

Now I look back as I celebrate the tenth anniversary of my Aliyah. I remember the miracles, and my emuna that Hashem would surely not forsake me if I followed Him. What was emuna for me then, is knowledge now. Remember I said that I was excited for where Hashem would lead me? I didn’t even know the beginning of it. I say now all the time: “In America, I had the life that I thought was the life of my dreams. Here in Israel, Hashem gave me the life that I didn’t dare to dream in my wildest dreams!”

One of the things I prayed for in my early days after making Aliyah was that I should always appreciate living here, and that it should never become old to me. Rather, every day I should thank Hashem for the privilege of serving Him in His palace, as if it was my first day here.

10 years later, living in Jerusalem is still fresh, new, and enthralling. I still pray to Hashem that I should feel this way every day of my life! And at every single event, every Rabbi Arush lecture that I attend, every wedding – I cry and thank Hashem that I live in Israel to be able to attend at all.

The Land of Israel is one of the biggest gifts Hashem ever gave the Jews. Moreover, Rabbi Arush teaches that the Land of Israel is the land of miracles – and here, the rules all go by emuna, not nature. If you come here ready to live your emuna on a totally new level, Hashem will never let you down!

***
Rachel Avrahami grew up in Los Angeles, CA, USA in a far-off valley where she was one of only a handful of Jews in a public high school of thousands. She found Hashem in the urban jungle of university. Rachel was privileged to read one of the first copies of The Garden of Emuna in English, and the rest, as they say, is history. She made Aliyah and immediately began working at Breslev Israel.

Rachel is now the Editor of Breslev Israel's English website. She welcomes questions, comments, articles, and personal stories to her email: rachel.avrahami@breslev.co.il.

Your article about aliyah was inspiring. It cuts to the chase. That was really well done. I am very happy you are strong on talking about aliyah. It's berlin 1930 over there and unless we educate our brothers and sisters about how "its not so bad" to make the move...

The Rishon Lezion Chief Rabbi of Israel HaRav Yitzchak Yosef wrote a letter to Jews in Ukraine, and ALL JEWS LIVING IN THE DIASPORA, to understand the threat of war as a call to quickly MOVE TO ERETZ YISRAEL.

Is Aliya for Us?

4 min
The Purpose of the Holy Land

The Universal Garden of Emuna

What’s the consolation in knowing that the world is full of strife when our personal lives are a never-ending saga of stress, worry, anxiety and challenges? Making a living today is like being a 21st Century gladiator. Family units are falling apart and marital bliss seems like a pipedream. People face child-education problems that they never imagined. What can a person do to maintain sanity? If sanity is such a struggle, who dares to dream of genuine happiness, fulfillment and true inner peace? You do.   As soon as you open up the first page of the new Universal Garden of Emuna by internationally acclaimed best-selling author Shalom Arush, whose books have helped millions of people around the globe live better lives, you gain the master-key to life’s locked doors, especially the doors to fulfilling your own personal potential.   Far from flash-in-the-pan fad spirituality, the new non-denomenational Universal Garden of Emuna takes the reader by the hand along the proven path to satisfaction of the soul. By learning emuna – the pure and simple faith in the Creator - the reader learns how to cultivate an intimate personal relationship with the Creator.   This book will quickly become your best friend, a book you’ll want to read over and over! A complete and total life-changer!   By world-renowned spiritual guide and bestselling author Shalom Arush, translated by Lazer Brody.   Paperback, 406 information-packed pages, including an amazing new explanation of the Seven Noahide Commandments for all mankind.

A stunning and elegant five-branch crystal candelabra that will add a very special touch to your Shabbat and Yom Tov ambience! Height: 30 c"m.

A pocketbook of knowledge and inspiration! In this lightweight, pocket-sized book, twenty three Jewish leaders, thinkers, and educators come together to offer their insights and knowledge on topics as varied as relationships, prayer, mysticism and happiness. These are twenty-three essays worth reading - because being Jewish matters. Edited by Doron Kornbluth. Paperback. 158 pages

Devory, a young Israeli mother, is told by her parents to prepare her house for very important guests. How many secrets can a family carry, and why is Devory at the center of every one? Will she ever get her simple life back? And what will the future hold for her if she doesn't?

This siddur is the first new Orthodox Hebrew-English siddur in a generation. The siddur embodies Koren’s impeccable textual accuracy and intuitive graphic design, and offers an enlightening translation, introduction and commentary by Rabbi Jonathan Sacks, one of the world’s leading Jewish thinkers. It is the only Orthodox siddur that includes prayers for the state of Israel, its soldiers and national holidays, and a halachic guide for visitors; prayers following childbirth and upon the birth of a daughter; a modern translation and transliteration, and citations of modern authorities. Published in cooperation with the Orthodox Union. Standard size, Ashkenaz, hardcover, Hebrew-English. Koren Publishers, 1296 pages.