Grab It by the Tail

Why was Moses so terrified when his walking staff turned into a snake? He spent years in the wilderness, undaunted by snakes, lions, scorpions and other perils…

Hashem reveals Himself to Moses in the burning bush and asks him, “What’s that in your hand?” Doesn’t Hashem know what Moses is holding? He certainly does, but He wants to teach Moses an important lesson.

Moses answers, “A stick”. This was the staff that Moses would be using to perform all of the subsequent miracles with. Hashem told him to throw the stick on the ground. Moses did, and it turned into a snake. When he saw the snake, Moses fled from it.

We have to ask ourselves, why was Moses afraid? Our sages tell us that for years, Moses would always go to the most isolated deserts and wildernesses, where no other human being set foot, so that he could commune with Hashem without anyone bothering him or interrupting him. Maybe there weren’t human beings in all those desolate places where he wandered, but you can be sure that they were full of fierce 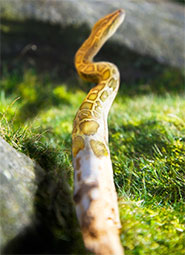 wild animals, snakes, and other perils. Why wasn’t he afraid all those years?

During all the years that Moses was in the desert, the sixty years that transpired between his fleeing from Egypt as a young man of twenty and his arrival in Midian, his meeting Jethro and his marriage to Jethro’s daughter sixty years later, Moses was cultivating his relationship with Hashem. He shunned society and only cared about clinging to Hashem. He fortified the huge spiritual vessel – his soul – that enabled him to merit the current Divine revelation by the burning bush. He did this all for the sake of getting close to Hashem and not for the sake of any ulterior motive or personal advantage.

During those years in the wilderness, despite the fact that he was not yet married, Moses attained a lofty level of personal holiness. Otherwise, he would not have encountered Hashem in the burning bush.

But now, Moses fears the stick-turned-into-snake and recoils from it. Why now, especially when he wasn’t afraid of the cobras and pythons in the wilderness?

With Hashem’s help, if I’m not mistaken, the snakes in the wilderness did not belong to Moses, so he wasn’t afraid of them. How so?

Moses knew all about Eve and the snake. The snake lusted for Eve and therefore wanted to dispose of Adam and take her for himself. The snake is the evil inclination, particularly sexual lust and promiscuity, what Rebbe Nachman calls, “the general evil”. The snakes in the desert didn’t belong to Moses. Moses was sure that he purged himself from all lust and from the evil inclination. But, when his own “staff” – his own powers, those that he leaned on and those that helped him perform his task – turned into a snake, he was greatly alarmed. The fact that he still had any trace of lust – the snake – within him terrified him.

Then, Hashem tells Moses to grab the tail of the snake. Once he does, the snake converts back to Moses’s staff.

What is Hashem telling him here?

As we said previously, the snake symbolizes a person’s lust and bodily urges. Once you grab them by the tail, in other words, you control them rather than them controlling you, they turn into a staff – a walking stick – a tool in your hands and a source of tremendous power that goes to work for you.

Our sages tell us that the greater a person is, the more powerful his evil inclination is (Tractate Succah 52a). Moses was a prodigious spiritual giant; that’s why he was so afraid of his “own” snake.

Moses was afraid of returning to civilization. He was fine tending Jethro’s sheep in the desolate outback; he didn’t have a problem being married either. But, he was afraid to face the type of tests that he would have to face as Hashem’s emissary and leader of the Jewish People. For that reason, he argued with Hashem for a whole week, refusing to be Hashem’s messenger. This was exactly what he was afraid of, that his “staff” would become a “snake” when exposed to temptation.

Hashem though, tells Moses that his humility is misplaced. As long as he grabs the snake by the tail – taking control of all his raw lust rather than the lust taking control of him – he will be the greatest prophet that ever walked the face of the earth.

Hashem undoubtedly told Moses another secret that our sages knew (ibid): if Hashem doesn’t help a person, no one can prevail over his evil inclination. Moses knew that he’d always need Hashem’s help and therefore spoke to Him incessantly.

Our job on earth is to grab our own snake by the tail. We cannot possibly kill the snake because by doing so, we destroy the stick as well. The stick-snake is our power; lust is a tremendous power. But rather than trying to break the lust, we channel it into the love of Hashem and passion in learning Torah and performing our mitzvot. Remember, Hashem told Moses to grab the snake, not to kill it. Once we do so, we all have the potential of becoming tzaddikim – Isaiah the Prophet says so (Isaiah 60:21).

Want to hear more? Listen to Rabbi Brody in this 45-minute video:

Personal holiness is the most significant factor that determines the quality of our personal relationship with Hashem.

Our job on earth is to grab our own snake by the tail.

3 min
Fighting Back the Darkness

The seven-branched menorah was placed in the Beit HaMikdash, where priests would light its candles every evening. The menorah is one of the oldest symbols of the Jewish people. It has been passed down from generation to generation from biblical times to the present day. Today, the menorah stands at the heart of the official emblem of the State of Israel. This menorah is a wonderful gift, and an ornament that combines the traditional character of Judaism. 5 x 11 cm

New at the Breslev Israel store!   A very pretty rhodium bracelet in a classy look and design, engraved with the "Shema Yisrael" in Hebrew.   Treat yourself and your loved ones to this very special and unique item!

If you do not have this Haggadah yet, it is time to purchase it! A unique Haggadah that includes every nusach with the customs of Rabbi Shalom Arush, shlita!   Passover Haggadah - a Haggadah seasoned with ideas and explanations that allow readers to connect with the essence and purpose of Passover. This Haggadah combines the nusach of Middle Easter and Ashkenaz communities with the customs of Rabbi Shalom Arush, shlita, emphasizing the Halachot regarding the Seder. "The main message of Passover is holy emuna - strengthening emuna, rooting it in our hearts, and passing it down from generation to generation. The purpose of creation is emuna- knowing how to recognize Hashem, may He be blessed. Happiness in life and the success of life depend on the degree of emuna!   "My only desire is to instill in all the houses of Israel the wonderful message of Passover, the Day of Emuna, which we know and believe that everything is from God and all for the good, and that we should thank God for everything in our lives - for the good and for what seems to be "bad". With that, we all have a good and sweet life." (Rabbi Shalom Arush, in the Preface at the beginning of the Haggadah). A must-have for your Passover Seder!   Paperback, 256 pages

Would you like to improve your day-to-day functioning? Would you like to be more effective, organized and satisfied with your life? This is the essence for you!   New! A tincture designed to help you with your functional and organizational ability. Created by Dr. Gila Gavrielov, PhD in Behavioral Science and Gemology, a specialist in diagnosis and healing using crystals.     This essence is designed to develop and improve everyday functioning and action-taking in order to help you become more organized, effective and satisfied with your life. The tincture encourages more positive thinking, balances hormonal function, tones, increases energy, improves blood circulation and strengthens muscles. It also clears the mind, allowing for improved concentration and being able to better organize your daily activities. You will find yourself actually taking action and thereby realizing goals, carrying out plans and dealing successfully with life's daily challenges.     Please note: Dr. Gila Gavrielov's tinctures are totally free of chemicals and side effects. The tinctures are based upon the frequency emitted by the Hoshen stones and are meant to help you heal naturally through an extraordinary method based on healing via fluctuating energy. The tinctures help to alleviate or eliminate unwanted behaviors, perceptions and qualities such as fearfulness, uncertainty, lack of self confidence, anger, jealousy, disturbances, imbalances, post traumatic stress disorder and more while helping you bring out your good qualities in the best way possible.   Everyone feels and reacts to the energies emitted by gemstones thanks to their crystal structure that transmits very concentrated and clear frequencies. Every stone, according to its particular mineral content, emanates its own unique and potent energy.   Certified kosher by Rav Landau shlit"a.