The world is arming to the hilt and nations are daring one another; Armageddon and Gog-Magog appear to be eventual realities. Will anyone survive a push-button war?

The world is arming to the hilt and nations are daring one another. Will the West call Putin's hand in the Ukraine? Will global Jihad get its hands on dirty nukes? Will Iran use its nuclear wild card? Will a missile battle in the Middle East trigger a global conflict? Any of these are likely scenarios; with such an international backdrop, Armageddon and Gog-Magog appear to be eventual realities. Will anyone survive a push-button war?

The famed mashgiach, or spiritual dean of the Lakewood Yeshiva in New Jersey, Rabbi Natan Meir Wachtfogel of saintly and blessed memory, heard from the Lakewood Rosh Yeshiva, Rabbi Aaron Kotler osb"m, that during World War I, many people went to the holy "Chafetz Chaim", Rabbi Yisroel Meir Kagan of Radin osb"m, and asked him if this terrible conflict would be the final war. They thought that this might be the war of Gog and Magog. 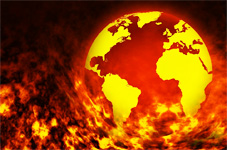 nothing. Moshiach will come with this war!"

On another occasion, Rabbi Aaron Kotler told the Lakewood Mashgiach that the "Chafetz Chaim" said that the third war will be the beginning of the Geula, the full redemption of our people; despite the utter severity of this global conflict, the true "sons and daughters of Torah" will survive. These are the people who live their lives according to Torah, severed completely from the ways of the nations. The Lakewood Mashgiach added that he has a promise, handed from teacher to pupil all the way back to Rabbi Yehoshua Leib Diskin obs"m, that in the final war before the coming of Moshiach, all the ehrlicher yidden – the G-d fearing Jews – will survive.

Who is an ehrlicher yid – a G-d fearing Jew?

The Lakewood Mashgiach answered, "He who is separated from the nations is a G-d fearing Jew! Such an individual has no connection to their culture, their society, their behavior, their music or their books. He or she doesn't read their magazines and newspapers. They're completely disconnected from them, their thoughts, their outlook, their manner of speech and their dress."

Once, the Lakewood Mashgiach heard a group of boys in the yeshiva talking about the prospects of a nuclear war. They asked each other, "Who can possibly survive a nuclear attack and an atom bomb?" The Mashgiach then gave a shmooz, an ethics lecture for the whole yeshiva and said, "How can a 'son of Torah' ask a question like that? A 'son of Torah' is separated from the nations so he has no danger to fear! It's guaranteed one-hudred percent that he'll survive!!! There's no room for doubt or for nervousness (B'ikvata D'Moshicha, Rabbi Yaacov Yisrael Lugasi, pg. 132).

Much effort is required if we want to be Bnei Torah and ehrlicher yidden – children of Torah and G-d fearing Jews. We must cleanse ourselves of any influence that is foreign to Torah.

Once, while saying his morning blessings, the "Chafetz Chaim" stood in silence for ten minutes before reciting the blessing, shelo asani goy – thank You, Hashem, for not making me a gentile. When asked why he hesitated so long, he answered, "I had to first check myself and make sure that I am free of any gentile influence; only then, did I proceed to make the blessing…"

One of the married students in Lakewood asked the Mashgiach, "My friend and I were both candidates for the same teaching position in the yeshiva; he was accepted and I was not. Why?"

The Mashgiach, who knew both students well, answered: "You friend never learned or read any foreign books; that's why he received the teaching position in the yeshiva."

The other young men in the yeshiva, who overheard the conversation between the Mashgiach and their peer, exclaimed, "Mashgiach, we all have our share of foreign influence."

The Mashgiach, in his characteristic candor and humility replied, "So do I."

If the Lakewood Mashgiach, a tzaddik of tremendous stature, claimed to suffer from foreign influence, then what can we say? The Torah commands us to avoid the ways of the nations (Vayikra 20:23), for it's the key to our survival and our redemption. The Midrash teaches us that our redemption from Egypt was by virtue of the fact the our ancestors did not change their language, did not change their names, preserved personal holiness and didn't speak slander (Yayikra Raba 32:5). In other words, they followed Torah and not Hollywood. We'd be wise to follow in their footsteps, for there's no better insurance policy in the world.

The last of the four items from mitzrayim, slander, is not really observed today among a good part of the yishivish world. Dress, language, custom etc are all well and dandy but what about slander?

The last of the four items from mitzrayim, slander, is not really observed today among a good part of the yishivish world. Dress, language, custom etc are all well and dandy but what about slander?

Jews in mitzrayim made a pact The book called "Loving Kindness" from Chofetz Chaim says that the Jews made a pact between one another, from the greatest to the 'least' to help one another no matter what and this is what moved Hashem to bring the redemption. I also thought it was the merit of the women of the generation that merited the redemption. And the Lubavitcher Rebbe says we will be redeemed even before we make collective teshuva. I wonder if wonder if we all return a little if it's like Nachshon.

Don't we often feel that current events are spinning out of control and that no one is in charge? Let's turn that feeling of helplessness into emuna in the One Who is in absolute control.

3 min
The Other Side to Sodom

A decorative Shabbat outlet cover in silver. Glides on easily with no need for velcro or any other adhesives. An item that will lend elegance to your Shabbat ambience!

Out of Nothing, Shlomi Cohen

The Koren Siddur for Children, Standard

The Koren Children's Siddur, created for the early elementary grades and the first in the Magerman Educational Series,  combines dynamic illustrations with thought-provoking educational components on each page to provide teachers and parents with an educational resource in addition to a conventional siddur. An amazing siddur for young children! Standard size, Ashkenaz, hardcover, Hebrew with English Instructions. Koren Publishers, 95 pages.

Talit and Tefillin bag of gray iimitation leather. Includes strap for light and easy carrying.   The shape of the bad is like an envelope with a magnetic closure.   Size 32 x 38 cm.   Perfect and beautiful bag! Also suitable as a gift!