Maybe we can't rectify all of society, but we can sure start by rectifying ourselves. Don't be a turkey - take nothing for granted. Say thank you and be sincere about it...

Thanksgiving is a special American holiday celebrated on the last Thursday of November. It commemorates the first Pilgrim corn harvest in 1621, the year after the Mayflower arrived in North America.

I wonder how many Americans are really familiar with the history of Thanksgiving. In effect, every single American owes thanks to an Indian by the name of Squanto.

Squanto, a member of the Pawtuxet tribe who had been kidnapped by an English sea captain and sold into slavery before escaping to London, eventually managed to return to his homeland on an exploratory 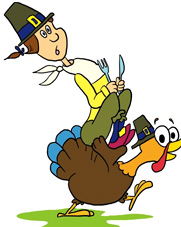 expedition. Squanto greeted the arriving Pilgrims, many of whom were devastated by malnutrition and illness, and taught them how to cultivate corn, extract sap from maple trees, catch fish in the rivers and avoid poisonous plants. He also helped the settlers forge an alliance with the Wampanoag, a local tribe led by Chief Metacomet, also known as King Philip, who did much in helping the strangers from England adapt to North American life.

The Pilgrims responded to the kindness of the native Americans by forcibly trying to convert them to Christianity. Chief Metacomet bitterly objected to the terrible influence that the new arrivals had on his people, which triggered a bloody war that took the lives of the vast majority of the Wampanoag Indians. Their allies, the Narraganset, were also killed. Those that were not killed in war fled to other tribes. Those who were captured were either exiled or sold into slavery.

Probably the greatest fulfillment of the commandment of loving our  fellow human is to express our gratitude for any favor – big or small – that our fellow human does for us. As much as Judaism honors and cherishes gratitude, it utterly loathes ingratitude.

The lowest form of ingrate is the person who returns an act of kindness with an act of evil. King Solomon says, “He who repays a favor with evil, evil shall never depart from his domain” (Proverbs 17:13).

The evangelistic Pilgrims in 17th Century North America were certainly not the first to return the Wampanoag Indians’ kindnesses by killing those who refused to forsake the ways of their ancestors and convert.

Consider these two points that the Torah cites:

We see that not once, but twice, Lot was saved in his uncle Abraham’s merit.

Yet, how do Lot’s offspring, the nations of Ammon and Moav, react to Abraham’s offspring? They hire the wicked soothsayer Bilaam to curse the Israelites, hoping that they’ll annihilate them in battle.

The Gemara tells that the grandsons of Haman are learning Torah in Bnai Brak. How can that be? Haman tried to wipe us off the map!

A Jew’s entire being is gratitude. The word for Jew in Hebrew – Yehudi – means one who thanks. From the moment we rise in the morning to the moment we retire at night, we’re thanking Hashem. But, we must also remember to appreciate and express our gratitude for the many favors we receive from others, and particularly our parents and our spouse. When a husband and wife are grateful to each other, their marriage is total bliss.

For a Jew, every single day of the year is Thanksgiving!

It’s nice to eat turkey, succotash, and pumpkin pie once a year. But is the holiday authentic when it’s celebrated on the ashes of the native Americans who helped the newcomers survive, only to be repaid by having their blood spilled? Doesn’t anyone do any soul-searching? Shouldn’t someone ask forgiveness of and recompense the native Americans? How does anyone in the State Department dare criticize the settlements in our holy Land of Israel, built on our Divine-given inheritance from over 3500 years ago? Our sages teach us that people tend to project their own blemishes on others.

Sorry, but my heart goes out to the Indians. Their tribulations are so similar to ours – persecuted by invading missionaries, exiled from their land, and discriminated in so many ways. Their lot has not been turkey and cranberry sauce, but a trail of tears. Someone ought to apologize to them. Until they do, their spiritual status resembles that of Ammon and Moav. They have long since perished. The Thanksgiving holiday without true and sincere gratitude is nothing but a turkey holiday, pun intended.

This Thanksgiving (once again, every day for a Jew), let’s remember to thank Hashem and to thank our fellow human for all the good they do for us. Thank the mailman for delivering the mail; thank your boss for getting your paycheck on time; thank your wife the hundreds of favors she does all day long, and thank your husband for bringing home the bread. Take nothing for granted. Maybe we can’t rectify all of society, but we can sure start by rectifying ourselves. Don’t be a turkey – say thank you and be sincere about it. And remember, it’s good to thank Hashem anytime and anywhere. Enjoy your turkey!

Here’s the cherry on the cake: the word in Hebrew for turkey is hodu, which means, “give thanks!”

The greatest fulfillment of the commandment of loving our  fellow human is to express our gratitude for any favor - big or small - that our fellow human does for us.

A Jew's entire being is gratitude.

Lubbavitch Rebbe on Thanksgiving You can see how the Lubbavitch Rebbe compares Hannuka and American Thanks Giving to G-D, and talks about the pilgrims and founding fathers and their faith in G-d and divine providence. You can see how Puritan Thanks giving is truly rooted in the Jewish scriptures. Check: http://www.chabad.org/therebbe/livingtorah/player_cdo/aid/454534/jewish/Stars-Stripes-and-Lights.htm

You can see how the Lubbavitch Rebbe compares Hannuka and American Thanks Giving to G-D, and talks about the pilgrims and founding fathers and their faith in G-d and divine providence. You can see how Puritan Thanks giving is truly rooted in the Jewish scriptures. Check: http://www.chabad.org/therebbe/livingtorah/player_cdo/aid/454534/jewish/Stars-Stripes-and-Lights.htm

Thanksgiving Dear Rabbi Brody. Firstly the Puritan/Indian relations should be judged within the historical context of that time. Secondly Thanksgiving celebration was not a thanksgiving to the Indians, it was thanksgiving to G-d. The American holiday's true origin was the New England Calvinist Thanksgiving. The Puritan observances were special days set aside during the week for thanksgiving and praise in response to events that the Puritans viewed as acts of G-d's special providence.

Is Israel's future really bound up with American politics and diplomacy? Let's review how Avraham Avinu dealt with conflicts between Hashem's commands and outside cultures.

3 min
The Jew and the Tattoo

For You, Jackie Eliyahu

The set includes the 2 bestsellers of Rabbi Lazer Brody: The Trail to Tranquility Finally you can say goodbye and good-riddance to anger, stress and anxiety !! The all-new sixth edition of The Trail to Tranquility by Rav Lazer Brody, printed right here in Israel is out! Tamar Yonah of Israel National Radio says, "This book turns you into the best person you can be!" Why not give yourself the gift of true inner peace that you've been dreaming of? Here's your chance, for once you read this rewarding and amazingly enjoyable book, you'll never know what you did without it. Chassidic Pearls Rabbi Brody's wonderful commentary on the weekly Torah portion. Includes short, simple, and inspiring parables and lessons for each Torah portion, as well as for the special holidays and times of the year, which you can share with the entire family. The quantity is limited - order now!

A unique and very impressive brown stone-like mezuzah, made of polyresin, with special decorations. The letter "ש" is embedded in the top of the mezuzah case.   Size 15 cm.   Gives a unique look to the house! Also suitable as an original gift!