Whether we like it or not, and whether we are ready for it or not, Jerusalem and the Temple are drawing Jews after them onto the world stage, and back into our past… 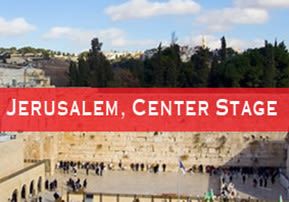 We now enter the three weeks between 17 Tammuz and Tisha B’Av, the periods when Jews especially mourn each year the destruction of the Holy Temple in Jerusalem.

And, it is not just the destruction of the Temple that we mourn. That is just the symbol of all that matters to the Jewish people, all that we have been forced to live without because we are still in exile. Perhaps, the most striking loss is how the majority of Jews today no longer even know about Tisha B’Av, and that the Jewish people once had temples, two of them to be exact.
There is a story that once Napoleon happened upon a shul, and saw Jews sitting on the floor and mourning. When he inquired about this strange behavior, they explained that it was Tisha B’Av, and that they were mourning the loss of the Temple. Napoleon’s response? "Any people that can mourn an event that occurred thousands of years ago will one day return to their land."
What would Napoleon have said today?
Perhaps, one of the most destructive elements of the Holocaust—a churban unto itself, and part of the Tisha B’Av mourning—is that it completely distracted us from our history. It was such a monstrous and painful event that all we could do when it was over was focus on the present, and if and when we dared, the future of the Jewish people. The recent past was too excruciating to contemplate, and beyond that was too distant to relate to.
Now, decades later, that past has been called into question, and it is being called into question in a city that, by international standards today, it should not be all that important.
It is a money world today, and what counts the most to the world are the money capitals: Washington, New York, London, Tokyo, Paris, Hong Kong—all the most cosmopolitan cities in the world and homes of "Big Money." In the past, perhaps, it was the dream and ambition of all great leaders to conquer Jerusalem.
However, today Jerusalem is but an archeological relic from the past, beautiful to visit, but not a place to spend one’s energies and resources in siege and conquest. Conquer New York financially, and that’s a real conquest. Even to the secular Israeli, Tel Aviv, home of the Bursa (Stock Market), is the pulse of the nation.
Except, of course, for the three major world religions.
The Jews want Jerusalem because it is Jerusalem and all it has ever meant to the Jewish people throughout Tanach and history. The Arabs want Jerusalem because they believe Mohammed ascended to Heaven from there, and more than likely, also, if not specifically, because the Jews want Jerusalem. And, the Christians want it because that was where their religion began, and also because of what it means to the Jewish people. 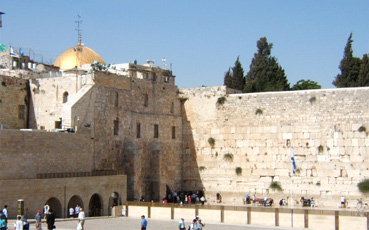 However, in spite of the logic of it, Jerusalem is fighting its way back on to the international scene. Washington, London, Paris—all of them have to deal with the Jerusalem issue. For, ironically, the Arab nations who are fighting for Jerusalem also control the money markets, or at least wield great influence over them. History (read: Divine Providence) has worked it out that the most fearful nations today, both financially and politically, like the old days, want to vanquish Jerusalem as well.
A strange twist of fate? It might have been had it not been prophesized thousands of years earlier. As it says:
After Moshiach comes, a major war will be instigated against Israel, as mentioned in the Holy Zohar (Shemos 7b), and in Parashas Vayaira (119a) and Toldos (139). This is the war of Gog and Magog spoken about in Yechezkel (38, 39), and Zechariah (14), as well as in Midrash Tehillim (Mizmor 118:9). There it says: Three times in the future Gog and Magog will come against Israel and go up against Jerusalem, and assemble and anger the nations with him to go up to Jerusalem . . . (Sha’arei Leshem, page 491)
So, we see, Jerusalem is expected to be the central issue as history winds down. And, more specifically, the Temple Mount, upon which the Arabs conveniently built their mosque. Thus, whether we like it or not, and whether we are ready for it or not, Jerusalem and the Temple are drawing Jews after them onto the world stage, and back into our past, the only place, seemingly, where the answers to resolve the present and the future conflicts can be found.
In other words, even most Jews today who still cling to their past in lifestyle and tradition do not in terms of mentality. We live in a highly advanced technological society with everyday mores that are anything but Torah-based. To be in golus is to live, deal, and cope with that society every day. Even the once isolated Torah communities around the world, even in Eretz Yisroel, can’t keep most of the outside influences completely at bay.
We don’t realize how much we have been affected; we don’t realize how much we have been dragged away from our Torah-outlook, even when we still live by Torah. It may not be our fault, at least not completely, just as the Midrash says that it wasn’t completely the Jewish people’s fault for worshipping idols in Egypt. "Metoch shibud"—within oppression—for so long, how can we resist and defend ourselves?
Perhaps, that helps to explain God’s phenomenal patience so far. In spite of the rampant assimilation and the horrific levels of inter-marriage, we have not suffered as previous generations have. In spite of the frightening daily profanation of God’s Holy Name, He seems to persevere and help us keep relative peace.
The question, of course, is always, for how long? Torah reality and Western reality are not one and the same thing, except in the rare places where they overlap. And, if there is an absolute and objective truth, which we Jews believe (and even know as much as anything can be known) there is, one of them must, by definition, be wrong. And, if one of them is wrong, then, by definition, at one point in time, the false one will have to give way to the true one.
Jerusalem and eventually, the Temple, returning to center stage and to the Jewish people represents that awesome historical process. Curious how Jerusalem and the Temple Mount were returned to the Jewish people in a SIX-day war—the number of the Divine Creation Process, and it is the SIXTH millenium in which the Final Redemption, and the Resurrection of the Dead will, according to our holy texts, occur.
Six corresponds to the sefirah called "Yesod" (Foundation), and the essence of the relationship between God and the Jewish people. It also corresponds to Yosef HaTzaddik, from whom Moshiach Ben Yosef is destined to come, if he hasn’t already. It will be Moshiach Ben Yosef’s job to re-build Jerusalem, as the Vilna Gaon taught:
According to the Gaon, all the work involved in gathering in the exiles, BUILDING JERUSALEM and broadening the settlement of the land of Israel, so that the Shechinah will return to it, all the principles of the work and all the major and minor details are connected to the mission and role of the first moshiach, Moshiach Ben Yosef. Moshiach ben Yosef is the miraculous power who will assist every act done when the awakening starts from below, in a natural manner, because he comes from the earth. (Kol HaTor, Chapter 1:2)
The main purpose of the Three Weeks and Tisha B’Av is to stimulate such our spiritual awakening from below, so we can return to Hashem and have Him bestow His Divine Presence in rebuilt Jerusalem, in our very midst, speedily and in our days, amen.
***
Pinchas Winston is the author of over 95 books on various topics that deal with current issues from a traditional Jewish perspective. He has also written on the weekly Torah reading since 1993, called “Perceptions”, as well as on current topics and trends affecting Jewish history, past and present. One of his missions is to make the depth and beauty of the more mystical teachings of Torah understandable and accessible to those who can really benefit from them. Visit his website at thirtysix.org. How can we prepare for the fast, what is permitted and what is prohibited, what do we do when the fast ends?

The Halachot of Tisha B’Av

5 min
The Power of a Word

2 min
The Seventeenth of Tammuz

Pair of Silver-Colored Cups for Oil

Don’t Ask for a Hot Dog

A wildly funny book filled with anecdotes of real people saying things in Hebrew that they'd never dream of saying when speaking in English. Yet somehow in attempted Hebrew, things come out not quite like they imagined...   Read this book and have the laugh of a lifetime!   Order today!

How do you turn pain and suffering into understanding? Jealousy into constructive acceptance?   New! A unique formula for spiritual development by Dr. Gila Gavrielov, PhD in Behavioral Science and Gemology, a specialist in diagnosis and healting with crystals.   This unique essence is designed to improve your ability of turning pain and suffering into understanding and suspicion and jealousy into constructive acceptance. Best of all, it helps you increase your joyfulness!    Please note: Dr. Gila Gavrielov's tinctures are totally free of chemicals and side effects. The tinctures are based on the frequency emitted by the Hoshen stones and are meant to help you heal naturally through an extraordinary method based on healing via fluctuating energy. The tinctures help to alleviate or eliminate unwanted behaviors, perceptions and qualities such as fearfulness, uncertainty, lack of self confidence, anger, jealousy, disturbances, imbalances, post traumatic stress disorder and more while helping you bring out your good qualities in the best way possible.   Everyone feels and reacts to the energies emitted by gemstones thanks to their crystal structure that transmits very concentrated and clear frequencies. Every stone, according to its particular mineral content, emanates its own unique and potent energy.   Price is per unit.   Certified kosher by Rav Landau shlit"a.

Mezuzah made of polyresin with "pearls" on front.   Length: 12 cm.