The Response to the Meron Tragedy

What do we do now? What comfort can we give to the families of those who lost loved ones in the disaster? How can we avoid a bigger tragedy? 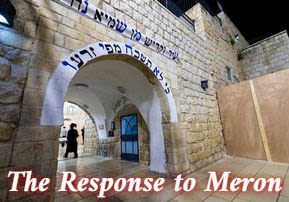 Editor’s Note: In From Celebration… to Day of Mourning, I explained Rabbi Arush’s answer to the initial question of: “How do we understand what happened?” In this translation, Rabbi Arush explains the answer to the next automatic question people are asking: “What do we do now?”

R’ Yisrael Salanter once broke a glass by accident. He right away he sat down and said, “Master of the World! What sin did I do that You caused a cup to break in my house?”

His students asked, “It was a just a cup! Why are you so worried about it to do teshuva over it?”

He answered, “Nothing happens if not for the decree of Hashem. If I don’t wake up to understand the hint now, then the next thing that happens already won’t be such a small hint…”

So I prayed and asked Hashem to help me understand the message. And the message I understood was loud and clear: The Jewish people have been plagued by fighting, arguments and disagreements, on the private and also the communal level. Never before have there been such levels of sinat chinam, hatred among Jews, of lashon hara – evil speech and slander within the Jewish people. And that is what caused this terrible tragedy.

And the solution is simple: We must love our fellow Jews, with mesirut nefesh – with self-sacrifice. This must be our new slogan!

Surely this means going above and beyond to help, to have mercy, to do whatever we can for someone else, including making peace with one another. But it also means to make the time, whatever it takes, to pray for the Jewish people!

If you love someone, you pray for them! So if we love each other, we have to pray for each other! And even though it’s so hard to find the time – we all work so hard, we’re so busy. It’s difficult just to carve out the hour of personal prayer, which we must find time for, and we cannot stop for anything. But I am asking you to find a way to add another 30 minutes of prayer every single day for the Jewish people! I know it will be difficult and that’s why I am telling you that it will take real self-sacrifice!

I want you to pray that everyone in the Jewish people will have peace with one another and love one another. And that – is dependent on emuna! So I want you to pray that every single Jew, and everyone in the world, should come to one of my books or CDs and start learning emuna. That every Jew should do teshuva and return to Hashem and His Torah, without suffering. That Hashem should redeem us with mercy, without wars, without bombs, without suffering, without plagues, without disasters or earthquakes. That everyone should start learning the real truth, and living according to it.

Don’t worry about repeating the words over and over again. I myself have done that for the past two days! Just make sure you fill an entire half an hour.

And for those of you already doing one hour of daily personal prayer – you cannot make this 30 minutes the second half of your personal prayer. This if for two reasons:

#2 – As I mentioned above, there is never any ability to not do your work on yourself. Hashem can forgive anything – except you throwing in the towel and not working on yourself to improve, however slowly and however difficult that might be, and on whatever spiritual level you might currently find yourself on. You must do your work on yourself! On that, there are no compromises, ever! So that one hour is hallowed time, and these additional prayers must be exactly that – in addition.

That being said, something is always better than nothing. If you absolutely cannot manage 30 minutes a day, then add in the max of what you can do, plus a little extra – real self-sacrifice.

Ultimately, this is the only comfort we can give to the families of those who lost loved ones in the disaster.

As I said on Sunday to one family that is currently mourning two sons who died together that I went to visit and comfort them – this is the true solace.

That because of their deaths, we woke up to come closer to Hashem. That their deaths should be the impetus for real change.

It's true 😌 It's correct The reflexión of The Rabino Shalom Arush of what happened, but have more Please ,forget us for a moment coronavirus causes and centre us this question from óptic of a extraterrene : when changed the circumstances? When The committee announce a new spiritual leader .Maybe this is the problem ,I that time think about and said It's absurd Absolutely . It's impossible that is leader progress because the same new leader starting his nominated fraud !. How consecuence the universe protest .For me is a spectre haunting presentiment of ruin. Excuse me .The Torá said listen Israel : Hashem is you God "Ejad".The Mesíah is coming. 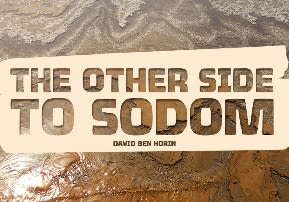 If you feel like you’re living in an upside-down world, you’re right! The new moral code and justice system are antithetical to the values of our Father, Avraham.
Never miss new articles!

The Other Side to Sodom

3 min
We are The Cure

From Behind the Curtain – A Chassidic Guide to Finding Hashem

From Behind the Curtain takes us on an incredible journey through the beautiful world of Chassidic thought - extracting practical guidancew from the writings of the Tzaddikim and demonstrating their relevance to the twenty-first-century Jew - enabling us to develop a more meaningful and passionate connection to the Master of the world, and opening our eyes to Hashem's loving hand, guiding us every step of the way.

The Garden of Riches – Spanish

This is the Spanish translation of B’Gan Ha’osher and has already become immensely popular in Israel.   It’s an amazingly enjoyable, reader-friendly and informative guidebook for attaining an adequate, stress-free income and a debt-free life; this is no small blessing in light of the global economy crumbling all around us. Even more, the book will help you achieve true riches - not just in terms of money, but in terms of lasting happiness and serenity.     Rabbi Shalom Arush’s track record of helping people is no less than phenomenal. His internationally-acclaimed The Garden of Emuna has helped millions of people live better lives. His respective marital manuals for men and women - The Garden of Peace and Women’s Wisdom - have virtually deflated ballooning divorce statistics, both in Israel and abroad.<p style="font-size: 13px; font-family: Arial, Helvetica, sans-serif; white-space: normal; word-spacing: 0px; text-tr

New at the Breslev Israel store!   A beautiful Star of David ring in a flower design. Silver-plated. Size 3.   A lovely gift item!

The Ten Commandments Necklace!   An original gift! A piece of jewelry that fits any occasion and outfit!   A delicate and unique necklace, made of rhodium, with a pendant of the Ten Commandments.   Rhodium is a strong and shiny metal in silver-white color that gives the jewelry a shiny and radiant appearance. It also protects against scratches and prevents tarnishing.

Want to increase your motivation will breaking emotional blocks?   New! A unique formula for releasing emotinal blocks by Dr. Gila Gavrielov, PhD in Behavioral Science and Gemology, a specialist in diagnosis and healing with crystals.   This unique essence is designed to increase motivation and break emotional blocks. It also works to stop obsessive thought patterns, calming of the emotions, increasing your joyfulness, creating optimism, balancing hormonal activity, development and strengthening of self confidence and love and to deepen our understanding of ourselves so that we can successfuly handle any emotional challenge that comes our way.   Please note: Dr. Gila Gavrielov's tinctures are totally free of chemicals and side effects. The tinctures are based upon the frequency emitted by the Hoshen stones and are meant to help you heal naturally through an extraordinary method based on healing via fluctuating energy. The tinctures help to alleviate or eliminate unwanted behaviors, perceptions and qualities such as fearfulness, uncertainty, lack of self confidence, anger, jealousy, disturbances, imbalances, post traumatic stress disorder and more while helping you bring out your good qualities in the best way possible.   Everyone feels and reacts to the energies emitted by gemstones thanks to their crystal structure that transmits very concentrated and clear frequencies. Every stone, according to its particular mineral content, emanates its own unique and potent energy.   Price is per unit.   Certified kosher by Rav Landau shlit"a. <span id="ContentPlaceHold