Holocaust Remembrance Day: A Cruise and a Camp

HOLOCAUST DAY is 21-Apr. If the guard was especially cruel, he won a visit to the camp brothel, made up of women inmates who were given more food... 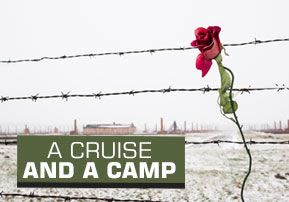 It was the bathrooms that got to me. Although I hadn’t seen the gas chambers yet. We were just beginning our tour of Mathausen and I was already stunned despite my mental preparations. Everyone on the cruise had been bracing themselves before this day had finally arrived.

The bathroom was just a wooden room that resembled a cabin you might see in the Catskills. It had holes in the floor, a few feet apart and those were the toilets. There were no partitions of any kind between the holes, everyone had to go in the presence of everyone else, and be quick, no matter what their physical condition was. Only a short time was given for hundreds of prisoners to use the “facilities.”

In the next room were large cement basins for washing up in the mornings. The people had to fight each other to get a few drops of freezing water to clean themselves. There was a letter on the wall enclosed in glass. It had been written by a young woman and she wrote that after a while she gave up fighting for a place at the faucets. I stopped caring, she wrote. It was too hard to get to the water and after a while I didn’t even know why I wanted to wash myself. What did I need to be clean for?”

I had the merit to be visiting Mathausen Concentration Camp with the Simon Wiesenthal Center and a plaque was placed there that morning in memory of Simon Wiesenthal, the famous Nazi hunter, who had 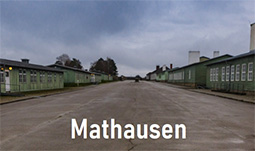 survived his stay at that evil place, where sadism in a guard was considered an asset. If the guard was especially cruel, he won a visit to the camp brothel, made up of woman inmates who were given slightly more food and didn’t have their heads shaved.

It was the contrasts that got to me. After a few hours at Mathausen our group climbed on the bus and headed back to the cruise ship. In our bus which was warm, clean and roomy we drove down the same steep hill that thousands of Jews had trudged up, carrying small children and some meager processions, in full view of the gawking villagers, who knew exactly where they were going. It didn’t take the residents long to get used to the sight of starving people making their way up to death and the smell of their burning corpses became part of the atmosphere.

The area surrounding the thick walls of Mathausen is simply beautiful.

We arrived back at the ship that sits on the Danube, the most beautiful of rivers, that had served as a murder weapon for thousands of innocent Jews, who had been tied together and pushed in.

As we walked through the doors we were greeted warmly by the staff and directed into the luxurious lounge where there was coffee and cookies to hold us over until dinner. The bar was open, and I headed over for a drink. As I sat there sipping my Pina Colada I thought to myself, “Jews are the only people in the world who pay thousands of dollars to go to places that make them cry.”

How could it be that we sit on this riverboat, free, rich and treated like royalty when seventy years ago we were rounded up like rabid animals, despised by all and tortured to death?

Only Hashem can create these circumstances that are so dramatic, so overwhelming and so unfathomable.

If accepting the inexplicable of the Holocaust is not emuna, then I have no idea what is.

There are hero stories and there are "Kiddush Hashem" stories, but the unprecedented true story of Major General Sidney Shachnow, ob"m, combines both and tops them all…

The Tiger from Kovno

New at the Breslev Israel store!   A pretty, polyresin-made magnet featuring two men praying at the kotel - for your fridge or door!   This very cute and pretty polyresin-made magnet will add pizzaz and joy to your fride or door. Captioned at the bottom with the word "Jerusalem". 5.6 c"m.   A beautiful momento of Jerusalem! Order today!

Chofetz Chaim – A Lesson a Day

Chofetz Chaim - A Lesson a Day In giving Jews the Torah, G-d granted them a system of laws and beliefs designed to elevate the human personality to a lofty state. Among these laws, the principles of shmiras haloshon -- harnessing the awesome power of the tongue -- address most directly the question of what G-d requires in man’s relationship with his fellow man. How we speak of others -- how we see them, judge them, empathize with them and, when necessary, how we criticize them -- defines us as people and as Jews. These aspects of life occur throughout each day, and these are the aspects that shmiras haloshon addresses. The laws of speech were written by man’s Creator to instruct His creation on how to live in this world. In their entirety, they comprise a precisely designed guidebook, one that is well within the ordinary person’s ability to assimilate and observe. By following these G-dly principles, each Jew builds and strengthens within himself his traits of compassion, kindness and love. His relationships begin to reflect the qualities and purposes for which he was created. He lives in harmony with himself, his family and his Creator. By creating us in His image, G-d gave each Jew the potential to reach this state. But we are in a world filled with stress, anger and derision, all of which continually, powerfully pull in the opposite direction. The Chofetz Chaim, whose life was a testimony to the enormous positive power of shmiras haloshon, said that the daily study of these halachos is the best way to succeed in this mitzvah. Not only does such study fortify one with knowledge, it rewards him with the Heavenly assistance he needs to put his learning into practice. Shmiras HaLoshon Yomi, the Hebrew program that was the model for this book, provides a convenient, methodical and accessible way to follow the Chofetz Chaim’s advice. Thousands of men and women worldwide have begun this five-minute-a-day learning program. They have seen how this small segment of learning makes an immediate, positive difference in their lives. Now, The Chofetz Chaim: A Lesson a Day provides this priceless learning tool for every English-speaking Jew. In abridged form, it presents an adaptation of two of the Chofetz Chaim’s masterpieces: Sefer Shmiras HaLashon, his work on hashkafah (philosophy), and his comprehensive work of halachah (law), Sefer Chofetz Chaim, the work for which he is known to this very day. Artscroll, hard-bound, 456 pages

Disposable Seder Plate If you're looking to go all out with disposables, now you can even use a disposable Seder plate! This Seder plate is made of plastic-coated cardboard and is decorated in classy shades of brown. The plate's center is designed for holding each of the Seder simanim and includes transparent plastic cups for placing each siman. This is a unique and high quality product, and is especially great for travelling or for when you prefer to use disposables. Size: 32 c"m.

An exciting, entirely imaginary depiction of how the coronavirus pandemic might have been handled in Eretz Yisrael, if the government was run according to the eternal values of our holy Torah Dear Parents and Children, We've been dealing with coronavirus, which has affected not only the entire world, but also each and every one of us, for over a year. We Jews know that a pandemic doesn't just happen one fine day... It happens because the One Above sent it, and He sent it to wake us up!    And so, of course, the first thing for us to do is to make a cheshbon hanefesh, to examine our deeds and try to do better. We also daven and plead before Hakadosh Baruch Hu that it should pass — because davening will help more than anything.   During these complicated times, we are dealing not only with the pandemic itself, but also with many questions: What is our hishtadlus? And what if some of the rules and regulations mean that we have to change our usual ways of serving Hashem?    When addressing these questions and others like it, there are many different opinions. People are divided about what is the right thing to do. But the truth is that for us it makes no difference: we have rabbanim whom we can ask, and we act according to what they say. If you have a question about how to act in any situation, you go to your father or your rav and there's your answer.    Beyond that, it's important to understand that even though there are different opinions about exactly what to do, everyone agrees that we have an obligation to protect our health. And no one disagrees that we have an obligation to protect the lives of the people around us.   What does this mean for us? One thing is clear: If we had the zechus to have a world run according to da'as Torah, there would be no disagreements. We all would behave the same way, truly united as one!   The aim of this book, which shows what Eretz Yisrael would look like if the government was solely run according to Torah, is to bridge the gaps that have formed between different communities and promote the message of achdus, of unity. At the end of the day, we have the Torah to guide us, and we all want to do the will of Hakadosh Baruch Hu. On that we all agree!   And so, we will continue to do our best to act in the way the rabbanim tell us and to do Hashem's will. At the same time, we daven and hope for the day when everything will be crystal clear, and there will be no place for disagreements anymore...