Reuven was passing out, sleeping a lot, suffering in pain and even losing his speech, due to the deterioration of his condition. The doctors gave him only weeks to live... 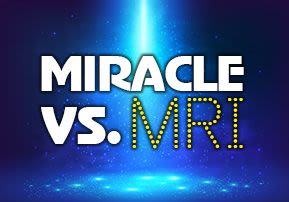 The following true story is about my good friend Reuven Korenstein and an amazing miracle that happened to him, which all of us here in Los Angeles witnessed first-hand.

Some weeks ago, doctors found something in Reuven's brain and gave him a diagnosis of seven weeks left to live, G-d forbid. They told him there was nothing they could do to help him and prescribed some drugs to alleviate his suffering in the meanwhile.

Reuven is an avid student of Rabbi Shalom Arush and immediately applied his teaching to look at the situation with eyes of emuna (faith). He immersed himself in personal prayer, focusing on thanking the Creator even for such a horrible situation. The following Shabbat, after he got the news from the doctors, he did a six-hour session of "thanks-giving" for what he wanted to see happen in his life in the future. He was sure that Hashem would save him, so he visualized his children dancing in Israel and in Uman.

Meanwhile, his situation was worsening. Reuven was passing out, sleeping a lot, suffering in pain and even losing his speech, due to the deterioration of his condition. He told me his hopes and dreams, including to start a Jewish school program for autistic and special needs kids (he has a special needs child himself) – these aspirations kept him alive.

Reuven returned to the doctors for an additional examination. They did more scans and asked him, "What did you do? Did you take anything?" The inflammation he had in his brain subsided somewhat, so the doctors gave him an "updated" life expectancy of twelve weeks instead of the seven weeks they originally predicted. Now, when they asked him whether or not he was taking the drugs they prescribed, they were mortified to find out Reuven hadn't even touched them and instead was devoting his time, energy and desire to praying, strengthening emuna and thanking Hashem.

At the end of the week, on Saturday night, Reuven hosted a special musical faith-encouraging session with food and words of holiness that I was privileged to attend, called a "Melava Malka". He then recited the prayer "Nishmat Kol Chai" with a minyan to conclude the evening (a tried-and-encouraged advice to help channel salvations).

Sunday, the day after, Reuven pondered his situation and decided that instead of consulting the doctors again, he'd try to get in touch with Rabbi Shalom Arush in Israel and seek his advice. Reuven spoke to Rabbi Arush's son, who relayed the following instructions from the Rabbi himself:

1. Do 2 Hours of saying thank-You to Hashem;

3. Go back to the doctors for more tests.

Rabbi Arush then relayed that Reuven has nothing to worry about.

Following this spiritual "prescription" based on Rabbi Arush's advice, he came back to the hospital, Cedars Sinai in Los Angeles. A CT-Scan revealed NOTHING abnormal. An MRI confirmed the same thing. The problem completely DISAPPEARED.

The doctors COULD NOT FIGURE IT OUT. They thought my friend was crazy…they had no other explanation for what their eyes (and machines) were now seeing.

This was A REAL MEDICAL MIRACLE, again, that all of us here in Los Angeles witnessed first-hand.

I'll add that during this time, Reuven's close friends were praying for his healing and beseeching the Almighty to reveal His Kindness and Mercy on His child, Reuven Korenstein, who has dealt with many difficult challenges in his life. One thing I want to emphasize – Reuven has been devoted to spreading Rabbi Arush's teachings of emuna for quite a few years now in any way he can.

We all came away strengthened by Reuven's story about the power of emuna, the blessing and advice from our tzaddikim, and the power of personal prayer, gratitude, positive thinking and pidyon nefesh. These ingredients came together to make a happy beginning (not ending) where Reuven our friend sees all his dreams come true, amen.

2 min
Returning From There

Handwashing cup in silver tones. Made of aluminum.

T-Shirt “Everything Turns Out for the Best” and “My Fire”. Black, Size XL

T-Shirt "Everything Turns Out for the Best" and "My Fire". Black, Size XL

Despair is not only meaningless, but it can lead to an even lower fall. But how can a person escape despair when he realizes the seriousness of these moral crimes?   Repentance always helps, and most importantly, do not repeat your evil deeds. Rabbi Nachman teaches that a person can completely correct the sin of breaking the covenant if, after repenting, he immerses in a mikvah and reads the following Psalms (in order): 16, 32, 41,42, 59, 77, 90, 105 , 137, 150. After that, a person should continue to strive for excellence, without worrying about what happened.     These ten Psalms are known as Tikkun Klali. In Likutey Moharan (1: 29), Rabbi Nachman explains that if a person can correct the sins associated with breaking the Covenant (that is, with a sin that includes all other sins), he will also correct everything else. Therefore, the correction ("tikun") of the Covenant is called the Tikun Klali ("General Correction").

Blessing for the Home on Hamsa

New and unique! The blessing for the home in English on a hamasa. This special hamsa is colored in blue and turquoise and framed in gold. Beautiful designs give it that extra decorative touch. Size: 18 c"m. A charming and handy item! Makes for a lovely gift!