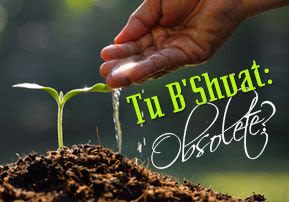 It seems that as the years go by, Tu B'Shvat – the New Year for trees – is a holiday that becomes less and less relevant. Modern man isn’t reliant on nature as he used to be. He lives in a sheltered and weatherproof home, and changes of weather don’t bother him. Technology gives him the ability to surmount all barriers that nature places before him. He can overcome illness, improve his quality of life, transverse space and time within a moment, and he feels that even the sky isn’t the limit.

Can this man possibly have what to learn from nature, slow and awkward as it is? Can the tree or the flower have anything to teach this hi-tech human, who is armed with a cellphone, laptop and upgraded car?

Well, the truth is that it does. This holiday, the festival of nature and trees, has something very important to teach the modern man. If he would only be wise enough to open his ears and listen, it could completely change his life. What are we referring to? All of the technological advances, along with the amazing benefits that they can offer, can be damaging as well. Modern man has become lazy. Period. Everything comes easy.

Whereas in the past, one would need to ride his donkey for three days to reach another city, today he can drive right over in under an hour. In the past, to communicate with a friend across the ocean, he would need to send a letter that would take at least two weeks to arrive. Today he whips out his cellphone and punches in a phone number or even just sends a quick email. In the past, if someone wanted chicken for lunch, he would need to take the chicken to be ritually slaughtered, pluck the feathers, salt it, cut it up, clean it, etc., now, he can buy frozen chicken from the store and just cook it. Or 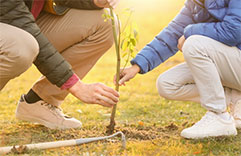 if he’s really tired, he can buy a ready-made meal and heat it in the microwave for thirty seconds.

This lifestyle gets a person used to being lazy.  He can get so many awesome things with barely any effort. As soon as one small thing doesn’t go his way, he immediately begins to whine and complain. But worse than that, he has no patience. Things used to take time, and people would wait patiently, staying calm, cool and collected. Today everything happens in the blink of an eye. Everything is done in a flash, and people who grow up in a generation of cell phones, internet and microwaves suffer from impatience. They can’t wait more than thirty seconds for anything.

Well, some things take longer than one minute. Some things demand time to fully develop and grow. What happens then? Modern man has a very difficult time with these things. He gets depressed, angry, frustrated and disappointed, and starts blaming others. It’s hard for him to understand that some things can’t work as fast as his microwave.

For example, educating one’s children is something that doesn’t happen overnight. We’re talking about investments of years, daily care, and patience. As much as one might want to place his child in the microwave, put in a code, and then see him come out thirty seconds later, fully educated and all grown up, it’s impossible! It just doesn’t work that way. But he’s always rushing, because he needs to advance his career and finish up projects, and how can he find the time to invest in his child’s care and education?

Relationships also require investment and effort. A deep and healthy relationship between a man and a woman takes longer than a minute to build. One needs to invest a lot of time and effort, by listening, supporting, encouraging and strengthening the other. Someone who doesn’t have the energy for that, and who demands instant results, will have a really hard time creating deep and strong relationships with their spouse, as well as with others.

Personal growth and character improvement demand time and effort as well. Jealousy, arrogance and greed don’t just disappear. Acquiring positive character traits such as seeing the good in others, not being lazy, having humility and having true inner happiness all require lots of hard work and investment. Can the modern man have the patience to invest in them?

Finally, we’ll give one more example which applies specifically to us in current times. Yes, we have learnt that the salvation of Israel will arrive slowly but surely. We were told that there would be declines, difficulties and setbacks along the way. So why do we forget all of this when it comes down to it? After two thousand years of exile, we’ve finally merited to establish our own state. We were all so sure that this is it, the redemption is almost here. Yet here we are, decades later, and it hasn’t worked out the way we wanted.

Moshiach still hasn’t arrived and there are still wars and terrorist attacks. There are problems and crisis, and hard things to cope with. It didn’t all fall into place instantly. So people lose patience, complain, get angry, give up hope and start blaming others. But wait, what’s happening here? Did anyone guarantee that within five minutes (or even fifty years) everything would work out according to our human imaginations and expectations?

And so, here we come to the Festival of the Trees. It’s no coincidence that salvation is compared to a plant. “May the plant of David your servant sprout speedily” – we say this in the morning prayers each day. We have so much to learn from the small and simple plant. From that tiny seed in the depths of the ground, pushing itself slowly but surely upward. It doesn’t use a stopwatch, it doesn't try to get it all done within a minute, and it isn’t busy with questions like, “What will be?”, “When will this finally end?”, and “Why aren’t they doing their job properly?”

It’s interested in one thing only. Growing. It keeps going, calmly and patiently, step by step. It pushes upward and never gives up. If a storm comes and tries to uproot it, it will bow its head and dig its roots deep into the ground until the fury passes. It eagerly soaks up every drop of rain and uses it for one thing only. To grow. Without calculations, without considerations, calmly and patiently.

On the Festival of Trees, let’s try to go out into nature, breathe in the air, absorb the smells, observe and listen. Let’s look at the little flower, caress its petals and listen to what it teaches us.

May you have a happy Tu B'Shvat!

A man is like a tree, and the most important thing is - water! Also find out why do we need to judge the trees at all?
Never miss new articles!

Oil on Canvas – Kotel and Sky

New at the Breslev store!   Artist Yehoshua Weissman's stunning paintings - now just a click away!   A gorgeous oil on canvas of the kotel against a backdrop of a blue-orange sky in a gold-colored frame. 35x25 c"m.   Now specially priced! A unique and special gift item!