Time with My Beloved Father

Come to your daily session with Hashem with a big smile on your face. Contrary to the evil inclination’s hype, it is not a burden that you just want to get out of the way... 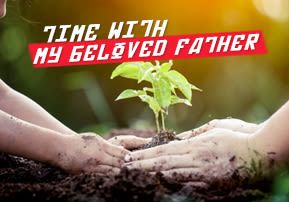 We can now understand how to be Hashem’s beloved sons and daughters. All we have to do is to set aside an hour a day for prayer in solitude, whether out in the field, in the office or in the kitchen at home, and speak to Hashem – our beloved Father in Heaven – in our own words. We take stock of everything we did in the previous twenty-four hours since our last session of hitbodedut, or personal prayer in solitude. We judge ourselves on three levels – thoughts, speech, and deeds. We rectify our wrongdoings and resolve to improve. We ask Hashem to bring us closer to Him. Such a process of personal prayer frees a person from stress, worry, sadness, and all other negative emotions. Even better, when we judge ourselves, Hashem doesn’t let the Heavenly court judge us, and we save ourselves untold anguish and severe judgments. We can now begin to understand what Rebbe Nachman of Breslev meant when he said that hitbodedut is more virtuous than literally anything else!

Is anyone senseless enough not to take advantage of such an opportunity of speaking to Hashem whenever they want? Be honest! Tell Hashem truthfully where you're holding and how you feel. "Hashem, I feel like I'm sinking in a sea of temptation all around me. I want to get close to You, but every time I try, the evil inclination knocks me over like a tidal wave. Without Your help, I can't possibly defeat it. Sure, I want to guard my eyes but so many times, I get caught off guard and I foul up. Hashem, loving Father in Heaven, I want You to be happy with me! The last thing in the world I want is to go against Your wishes. 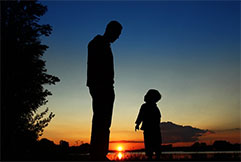 Please help me!" Such a sincere dialogue with Hashem is not only the greatest form of teshuva, it's the best possible preparation for Rosh Hashana.

Come to your daily session with Hashem with a big smile on your face. It's not some heavy obligation that you want to rid yourself of as the evil inclination will tell you. Meet Hashem daily and speak to Him from the heart. It's the greatest gift that a person could have.

Rebbe Nachman teaches us that our ability to judge ourselves fairly depends on our connection to the true tzaddik, who teaches us how to see the good in ourselves. But, what happens when a person's power of judgment is distorted? Without a connection to the true tzaddik who teaches him how to judge himself fairly and also teaches him how much Hashem loves him, a person is liable to feel that Hashem is unfair with him. This is a gross distortion of Divine judgment, which – as we mentioned earlier – is totally concerned with a person's ultimate benefit.

Everything Hashem does with a person is for the person's ultimate good. That's why we must thank Hashem for everything. Therefore, on a spiritual level, any depression, sadness or negative emotion comes from a person's inner feeling that Hashem is treating him harshly or unfairly, Heaven forbid. This is a distorted and warped view of Divine justice. As such, we arrive at a remarkable conclusion: any negative emotion, sadness and despair are the result of a distorted and warped view of Divine justice. Where does that mistake come from? It's all the result of the evil inclination's dishonest propaganda. The fact that Hashem loves you is truth. Any feeling otherwise is a departure from the truth. The reason that the evil inclination is called the evil inclination is that all evil and negative thoughts come from it.

When you feel that Hashem loves you, you're feeling holiness. That's the feeling you get when you set aside time to speak with Hashem every day – there's no greater feeling in the world.

Hashem does only good. That's why we must thank Him for everything. And, by thanking Him, we keep the gates of salvation wide open.

As soon as a person says in his heart that he wants to get closer to Hashem, even if he hasn't yet made the first tangible step, he's already considered to be a tzaddik…

4 min
Come Back to Life and See the Good

Halachos of Other People’s Money

Halachos of Other People's Money This must-read includes the most relevant sections of Choshen Mishpat - the section of the Shulchan Aruch (Code of Jewish Law) dealing with monetary matters. Some topics include: borrowing without permission, timely payment of wages and rentals, and when and how to return a lost object. By Rabbi Yisroel Pinchos Bodner. Feldheim, hardcover, 235 pages.

The Fiftieth Gate - Likutey Tefilot  Vol.3 Likutey Tefilot is a collection of the prayers of Reb Noson, Rebbe Nachman's leading disciple. A towering classic of Jewish spiritual literature, Likutey Tefilot gives voice to our innermost feelings and aspirations, never failing to provide us with the right words when we need them most. Includes beautiful prayers and supplications for every subject, suiting all moods and needs. Includes a full introduction to the concept of prayer and its centrality in Jewish life. Prayers 41-66. Translated by Avraham Greenbaum. Softcover, 631 pages.