Tu B'Shvat, the New Year for trees, is the greatest symbol of the Jewish People's return to our homeland; for that reason, the trees in Israel are now prime terror targets... 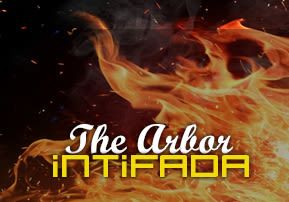 This past year has been a horrendous period for the fields and trees of Israel's south, which have become the targets of an old/new type of terror – arson. Having been neutralized in all other types of terror attempts, Hamas has turned to "kite arson", flying incendiary kites in the prevailing winds to ignite the forests and fields of the Northern Negev, the desert that has bloomed in the hands of Israeli farmers and foresters. One asks oneself, "Why the sadistic and sordid war against wheat fields, trees and nature preserves?"

Let's ask another question, whose answer enables us to understand the "Arbor Intifada", the Arab uprising and terror against the trees:

The 15th of Shvat, or "Tu B'Shvat," is the Jewish New Year for trees. People raise an eyebrow and ask, "Who needs a new year for trees?" The Torah tells us that "man is a tree in the field"; in other words, trees are in many ways a metaphor for humans. We use tree terminology when we speak about ourselves, especially when we speak about tradition. We use such terms as "family tree", "family roots", and "Family branches". But even more so, trees and the planting of trees symbolize the Jewish People's return to our hallowed homeland. Wherever we settle, we plant trees. Our enemies are well aware of this fact. So is the evil inclination. Why are both so afraid of our trees?

The Prophet Ezekiel and the Midrash connect the dots between trees, the Holy Land and the Geula – the full redemption of our people and the ingathering of the exiles. He says, "And you, O mountains of Israel, shall give forth your branch and bear your fruit for My people Israel, for they are soon to come." The Prophet hereby indicates that when the mountains of Israel flower with fruit blossoming tree branches, the Geula and massive Aliya from around the world are imminent.

The evil inclination opposes the Geula tooth and nail while our enemies shudder at the idea of massive Aliya. Together, they have devised a most sinister idea – the Arbor Intifada, the uprising against the trees. Hamas, ISIS and the Fatah reassessed themselves and the effectiveness of their ongoing terror activities

against the people and the land of Israel: Why kill a Jew at a time with knife stabbings when with one lighting of a match, they can burn tens of thousands of trees and chase Jews from their homes?

The fact that "Palestinian" terrorists had no problem in burning the Land of Israel is more conclusive proof that they are strangers here – migrant intruders with no connection to and no feeling for the Land of Israel. You can't burn down your own home.

Suppose you build a home with your own two hands and do all the landscaping yourself. Even if someone stole the home from you, you couldn't burn down the house you built or the trees you planted.

Israel suffered the severe burn of the Arbor Intifada in November, 2016 when the culmination and peak of a long draught was accompanied by exceptionally severe dry winds from the desert to the east of Israel. More than 7,500 acres of forests and 2,700 acres of urban areas were destroyed by fires in Haifa, Zichron Ya’acov, Neveh Shalom, Modi’in, Neveh Ilan, Nataf and other areas throughout the country, according to Keren Kayemeth Le'Yisrael-Jewish National Fund’s firefighting services.

At an average of 450 trees per acre – a very conservative number for pine and Cyprus forest plantings – Israel lost over three million trees this past November. I call them "the green martyrs". In fact, as the holy Ariza”l teaches that human souls are often reincarnated in trees, this is tantamount to losing 3 million souls, Heaven forbid. I certainly hope the Prime Minister keeps his promise. In regard to the Arbor Intifada, Prime Minister Netanyahu said, "In the place of every tree that was charred, another 10 green trees will bloom. That is what our predecessors have done since the establishment of the Zionist enterprise, and that is what we will do as well: plant, build and deepen our roots.”

When the smoke cleared, there were 1,700 fires in the eight days of the Arbor Intifada.

What does the future hold?

The January 6, 2017 issue of ISIS’s monthly print publication, Rumiyah (meaning Rome, in a reference to an Islamic prophecy that foretells the downfall of Rome in the context of "infidels" battling Muslims), an article titled, “Just Terror Tactics” cited the November 22-27, 2016 fires in Israel as an example of the effective use of fire for terrorism. The sinister and sadistic ISIS spokesman calls on operatives around the world to adapt the methods of the Arbor Intifada. The article continues as a manual for effective burning.

When the fire of emuna, Torah and teshuva glows in our hearts, there will be no fires in our homes or forests, measure for measure. When we do Hashem's will, our enemies self-destruct.

It's time to kindle our spiritual fires, for they will extinguish the Arbor Intifada, once and for all.

Why is there a special New Year for trees? On Tu B'Shvat, the almond trees in the mountains of Israel begin to blossom, carrying a special message for the Jewish People...

Nishmas: Song of the Soul

On Shabbos morning, as the world is wrapped in a blanket of peace and serenity, we are given a gift, the chance to recite a sacred tefillah. Whenever and wherever it’s recited, Nishmas carries the same power and glory, an ode that expreses our deepest emotion, the gratitude and hope and simple joy in being alive. In this volume, for the first time ever in English, Rabbi Yisroel Besser gives us a whole new understanding of the magnificent words of Nishmas, with a sweeping, fresh and contemporary commentary, chock full of enlightening stories. Hardcover, Pages: 144

The Universal Garden of Emuna – Chinese

What’s the consolation in knowing that the world is full of strife when our personal lives are a never-ending saga of stress, worry, anxiety, and challenges? Making a living today is like being a 21st Century gladiator. Family units are falling apart and marital bliss seems like a pipe dream. People face child-education problems that they never imagined. What can a person do to maintain sanity? If sanity is such a struggle, who dares to dream of genuine happiness, fulfillment, and true inner peace? You do!   As soon as you open up the first page of the new Universal Garden of Emuna by internationally acclaimed best-selling author Shalom Arush, whose books have helped millions of people around the globe live better lives, you gain the master-key to life’s locked doors, especially the doors to fulfilling your own personal potential.   Far from flash-in-the-pan fad spirituality, the new non-denominational Universal Garden of Emuna takes the reader by the hand along the proven path to satisfaction of the soul. By learning emuna – the pure and simple faith in the Creator - the reader learns how to cultivate an intimate personal relationship with the Creator.   This book will quickly become your best friend, a book you’ll want to read over and over! A complete and total life-changer!    Paperback, 406 information-packed pages, including an amazing new explanation of the Seven Noahide Commandments for all mankind.

New!   Outpouring of the Soul & Restore my Soul by Rabbi Nachman of Breslev   Hebrew/English edition   Including the Tikkun Haklali in Hebrew   Hardcover, 410 pages   A must have in your Breslev literature collection!

Necklace with Designs of Eretz Yisrael and Star of David

A unique and spectacular necklace with pendants of Eretz Israel and Star of David. The necklace and pendant are made of rhodium silver.   Also suitable as a special and original gift for your loved ones!

Through the individual recollections of the grandmother, this book becomes a window to past Jewish life as well as a personal family memoir An interactive family tree enables the reader to easily keep track of each ancestor. More than a tree bearing family names, this "tree" captures the texture of a past world, evoking traditions, memories and lore of the grandmother's life.  It will surely become a family heirloom  handed down from generation to generation.

Small hamsa ("baby" hamsa) in blue for a boy or in pink for a girl.