Right Here With Us

On Succoth, Hashem comes close to be with Klal Yisroel. People think that the foreign nations have a better life than we do. But Hashem chose Avrohom Avinu, Yitzchak, and Yaakov. It wasn’t for nothing. All they wanted was Hashem, 24/7. Imagine only loving Hashem, and nothing else. Try it for a day or two. Avrohom Avinu did this for 100 years. The rest of the world argued with him and tried to kill him. He stayed strong. And this is only part of what Avrohom Avinu did. Wouldn’t you choose him?

Then Yitzchak Avinu came along and argued that there was a different way to serve Hashem. He argued that we need to stand in fear and dread before the King. This was a new way.

Then Yaakov Avinu came along, and said that, although both these paths are correct, they aren’t the absolute truth. The absolute truth is that we have to serve Hashem with everything in our lives. We can work for Lavan – Lavan is your boss or father-in-law – and even there, looking after his sheep, we can 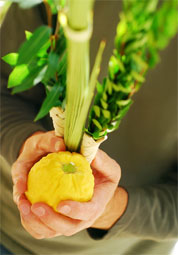 cleave to Hashem. We can know that everything is from Hashem.

Then, from all the brothers, Hashem chose Yosef. Then there was Moshe Rabeinu. Later on, we had the Tannaim, and the Amoraim. These are the people who brought Hashem into the world. Moshe Rabeinu was the one who really revealed Hashem to the world. R’ Shimon revealed to us the light that there was at Kabolos HaTorah. In the Zohar HaKadosh he explained how only the Tsaddikim who reach the very highest levels can arouse the highest levels of Hashem’s mercy. Hashem constricted himself by the Tsaddikim.

Where does it say that someone can atone for sins, apart from Hashem? Hashem is the one in charge, we always need His mercy. What does it mean that the Tsaddik atones for sins? Or that the Beis HaMikdash atones for sins, or the Cohen Gadol on Yom Kippur? The Zohar HaKadosh explains that it’s the holiness of the Tsaddikim that atones for sins.

We’ve learnt that we need to sigh, and when we do, we reconnect ourselves to holiness. If that’s the case, what do we need the Tsaddik for? Why do I need the Tsaddik to connect to the Torah for me, when I can do it myself? The answer is – of course you need to do as much as you can. Every soldier in a battle knows that he can’t rely entirely on anyone else. He has to keep himself alert. Don’t get complacent. Take hold of yourself, do teshuva, learn, pray. Do as much as you can. But when a soldier really is all alone, without his company, he can easily be surrounded and captured. When you’re together with others, they watch out for you and warn you when danger is approaching.

We have to do our part. Why doesn’t the Rebbe do everything by himself? That’s not the way it works. We have to do what we can. At a certain point, we reach the place where we need forgiveness. We need a spirit of vitality and we just don’t have it. Perhaps we had it a long time ago – “Twenty years ago I had a really sincere wish to do teshuvah. Once, I felt what Shabbos was. I had something back then, but it’s gone now.” Where has it gone to? It got swept away by the storm wind.

How do we get it back? We need a Tsaddik who knows about serving Hashem to show us how Hashem is still with us. There are many Rabbonim who know how to learn, but not so many who know about serving Hashem. I spent time with many great Rabbonim – R’ Elyashiv, R’ Moshe Feinstein, R’ Shlomo Zalman, R’ Weiss. One thing they all had in common – if they didn’t know about something, they said so. I met R’ Moshe Feinstein when I was a young boy. I would guard over the esrogim until the Rav came to check them. I was sitting there, and R’ Moshe came in. He sat down next to me, on an old rickety bench. I told him that I was finding things hard. He looked at me with this serious look on his face, as if he felt he needed to save me. He put his hand on me and said, “Mein kindt, nor Tefillah.” [My child, only prayer.]

We have a Rebbe who comes and sits next to us on the bench. He puts his hand on our shoulder, and comes right down to our level. And, he's right here with us in the Succa, together with the Shechina, Hashem's Divine Presence.

The Garden of Riches

The Garden of Riches – A Practical Guide to Financial Success This is the English translation of B’Gan Ha’osher and has already become immensely popular in Israel. It’s an amazingly enjoyable, reader-friendly and informative guidebook for attaining an adequate, stress-free income and a debt-free life; this is no small blessing in light of the global economy crumbling all around us. Even more, the book will help you achieve true riches - not just in terms of money, but in terms of lasting happiness and serenity. Rabbi Shalom Arush’s track record of helping people is no less than phenomenal. His internationally-acclaimed The Garden of Emuna has helped millions of people live better lives. His respective marital manuals for men and women - The Garden of Peace and Women’s Wisdom - have virtually deflated ballooning divorce statistics, both in Israel and abroad. This book will undoubtedly improve your income too. Whether you’re a professional, an independent businessperson, a salaried worker or a student, The Garden of Riches will surely become your trusted companion and practical guide to a pleasurable, worry-free livelihood. By Rabbi Shalom Arush. Translated by Rabbi Lazer Brody. Deluxe paperback, 254 pages

New at the Breslev Israel store!   A beautiful braided bracelet in purple with a rodium-made Hamsa in silver color and a blue eye.   Great gift item! Order today!

The Garden of Peace – Italian

The Garden of Peace, Rabbi Shalom Arush's marital guide for men, has already tranformed the lives of thousands and thousands of people the world over.   The benefits that a husband will attain both on a spiritual and a material level defy description, once a husband gets to the root of his marital problems and makes his wife first place in his life. The nagging and complaints will disappear, as well as the petty requests and the demands on his time. The husband will feel the benefit of Divine assistance and will succeed in whatever he does.     By Rabbi Shalom Arush.  <p

Compiled by Rabbi Shai Graucher   As we read through the sefer, we can almost hear the voice of this incomparable gadol b'Yisrael in his Torah insights, his guidance in all matters large and small, and, particularly, in his stories, warm and personal, of his illustrious family. Here we will read about his father, the Steipler Gaon; his father-in-law, Rav Elyashiv; his uncle, the Chazon Ish; and, of course, his wife, Rebbetzin Batsheva Kanievsky.   Rabbi Shai Graucher is an almost-daily visitor to Rav Chaim. He pored through all of Rav Chaim's many Torah writings, learned with him, and collected his insights and comments on the Chumash. He has been privileged to hear many stories directly from Rav Chaim and his family and these, too, are included. Everything has been adapted and translated for maximum readability and clarity.   This book is an instant classic, a sefer that belongs on every Shabbos table!   Hard cover, 402 pages