Willow in the Wind

Kalman looked up from his butcher block and he saw some menacing Cossacks in the doorway. "Jhid," they sneered in Russian, "the day of your funeral has arrived"... 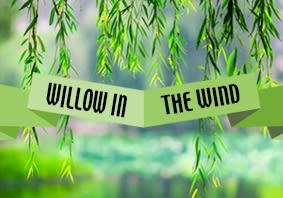 The marauding Cossacks were on a rampage. The pogroms of 1768 decimated Ukrainian Jewry. Some cities lost half their Jewish population; the Jews of Uman, all 33,000 except for a handful who managed to hide, were totally wiped out.

If you're traveling north from Breslev to Berditchev, you'll hit the Kalinovka crossroads. Take a left there and travel westward for another ten kilometers and you'll hit the town of Yanov. This is the shtetyl where my father's family comes from.

Many Jewish folk tales stem from the shtetlach, the Jewish hamlets of Eastern Europe. Some are true, some are exaggerated and some are the figments of imaginative minds, but all have a deep Torah-and-folk flavor and they usually carry poignant messages. I want to share one such tale that stems from Yanov, which you can share with your family and friends at your Succoth table. Let me tell you about 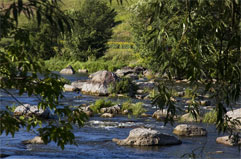 Most of the boys in Yanov went to cheder – Torah-oriented elementary school – until their Bar Mitzva. Then, they'd either apprentice themselves to a tradesman, go into commerce or get some other type of job. Within a year after their Bar Mitzva, most of them would be married as well. The lucky blessed with sharp minds and wealthy parents would go to study in the yeshivas of Poland, Hungary and Lithuania. Yet, the Ukrainian Jews were known for their simplicity and righteousness. No wonder that the origins of so many tsaddikim, like the Baal Shem Tov, Rebbe Levi Yitzchak of Berditchev and Rebbe Nachman of Breslev are in the Ukraine.

Kalman Katzav became an orphan at a young age. He didn't have the luxury of finishing seven grades of cheder before his Bar Mitzva. After the second grade, he had to go to work. Apprenticed to a butcher, Kalman had to lift chunks of beef carcasses that were bigger than he was. While his body developed into a massive mound of muscle with forearms that looked like sledgehammers, his mind wasn't so fortunate. He knew the aleph-bet, but could barely read anything other than the simplest of words. Yet, he knew his prayers and a few passages of Psalms by heart, and said both daily and with dedication.

Kalman's social skills were further hampered by his speech – he stuttered. He was also deaf in one ear. Mischievous muddy-nosed urchins would often jeer him. They weren't afraid of Kalman's fist of retribution, because he wouldn't lift a finger against any of Hashem's creatures, much less a Jewish lad, no matter how insolent. Thoughtless adults would also vent their frustrations by taking advantage of Kalman, making fun of him too. Kalman never answered nor protested; he'd only smile, sharpen his knife and go back to the piece of meat that was on his butcher block. After Kalman died, one of the tsaddikim said that Kalman's butcher block was the next holiest thing to the altar in the Holy Temple, for the simple butcher always undercharged people to make sure that he wouldn't have a single copper kopeck (penny) that didn't belong to him. As it was, he barely eked out a living.

On late afternoon, a balagoola, a wagon master, came riding into town whipping his two horses and pushing them as fast as he could. Not even stopping on Yanov's main cobblestone street, he yelled, "The Cossacks are coming, the Cossacks are coming!" The town went into a frenzy. Some hid in cellars and some fled to the nearby woods. Kalman was so engrossed in his work that he didn't even hear what was going on.

The Cossacks entered town on horseback, their sabers waving in the air, thirsting for Jewish blood. Everything on the main street was shuttered and bolted except for Kalman's butcher shop. Kalman looked up from his butcher block and he saw some menacing Cossacks in the doorway. "Jhid," they sneered in Russian, "the day of your funeral has arrived."

Kalman didn't answer. He grabbed a meat cleaver in his right hand and a bone-splitting ax in his left. Eight Cossacks stormed the shop – no more could fit inside. Kalman subdued six of them before the seventh managed to stab him in the belly. Kalman pulled the saber out of his gut and killed the Cossack with it. Another bunch of Cossacks stormed the butcher shop, trampling the corpses of their comrades. Kalman was losing both his blood and his strength. After he sent ten of the Jew-haters into the special purgatory that's reserved for them, he breathed his last breath and died a heroic martyr's death.

With ten dead and another six badly wounded, the Cossacks licked their wounds, gathered their casualties and left town. For the time, the Jewish population of Yanov was spared. No one ever again made fun of Kalman Katzav, the holy martyr.

Lucky that the keyboard on my laptop can withstand a few tears, because I can't keep a dry eye when I tell the end of the story.

Tradition says that when one of the hidden tzaddikim eulogized Kalman, who was murdered in the days between Yom Kippur and Succoth, he said: "The Gemara in tractate Menachot tells us that Hashem performs all the mitzvoth. We also know that there is nothing of material content in the Upper Worlds. We must therefore ask, what is Hashem's lulav on Succoth? What are the four species that He takes in hand when the angels sing Hallel? The etrog (citron) is the holy neshama of the Baal Shem Tov; The lulav (palm fronds) is the holy neshama of Rebbe Itzikel Dorovitcher; the hadassim (myrtle) are the holy neshama of Rebbe Nachman of Horodenka; and the aravas (willows) are the holy martyred neshama of Kalman Katzav!"

In case anyone wants to know what Kalman Katzav's holy neshama (soul) is doing bound up with three of the greatest tzaddikim the world ever knew, it's the same as the four species. The etrog, lulav, and triple-leafed myrtle are very expensive. The willows cost virtually nothing and can often be found by a creek or river and gathered for free. Yet, without the willows, a thousand-dollar set of etrog, lulav and hadassim are worthless. Even though the aravas are inexpensive, they too must be strictly in adherence to Halachic requirements. The aravas represent the simple Jew; Kalman Katzav – with his impeccable character, his silent suffering of insults and his courage sanctification of Hashem's Name – made him the finest of the simple Jew. He therefore, according to Ukrainian Jewish folklore, was Hashem's choice for His own four species on Succoth.

Local tradition says that when you walk along the banks of the Bugg River in the Ukraine during Succoth, and you hear the autumn wind blowing through the willows, it sounds like someone is whispering, "Kalman, Kalman"…

Blessings for a joyous holiday and a wonderful New Year!

4 min
Who is Running the Hotel in Warsaw?

A Conversation with the Creator (Russian)

“I will pour out my soul before Him ...” (Psalms of David)   "About everything that is needed, I speak with God ... Cares? Sadness? I rely on Him. Only He who knows me can help me not to despair and go forward!"   A collection of tips for inspired and sincere prayer according to the teachings of Rabbi Nachman of Breslev. Includes prayers of Rabbi Nathan from Breslev in Russian.   The author is Rav Yitzhak Besancon.   Format 12 x 19 cm., 101 pages Paperback. Hurry to order while supply lasts!

To Kindle a Soul

Increasingly, forward-looking scientists and psychologists researching issues of childrearing are finding themselves looking...backwards! After years of failed experiments in education, it is the Torah's eternal wisdom that is proving itself the most effective, most humane, and most sensible way of teaching our children. In this fascinating, extensively-researched, and beautifully written work, Rabbi Kelemen, best-selling author, world-renowned lecturer, and acclaimed teacher, sets out a wonderfully practical Torah-based model for raising ethical, moral, and well-adjusted children, backing up his insights with over 400 scientific studies. This book is must reading for kiruv professionals and for parents, both observant and non-observant alike.

Large Book of Psalms in large print!   The book provides the reader large letters and with accents that are accepted by all communities. Includes a Perek Shira and Tikkun Clali.   Highly recommended!   33 * 22 cm   Hardcover, 415 pages

Chochmas Nashim – A Woman’s Role in Building Her Home

Authors: Sosha Netlson, Esther Trevor   "...This book is an asset in every home. It is very worthwhile to read it every so often. It gives encouragement, incentive, it gives a desire and ability to give in, to give honor, to be humble to one's husband in every situation and obviously the tremendous reward in this world and also in the world to come...." -Rebbetzin Koledetsky (daughter of Hagaon Harav Chaim Kanievsky)   This book includes a section called Chochmas Kallos that describes how to create a positive relationship with a mother-in-law.   Pages: 292