Rebbe Nachman has some very special things to say about Succoth and its related mitzvoth, for on Succoth, a person merits Divine abundance of all kinds... 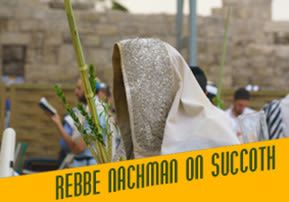 In order to enhance our appreciation and observance of Succoth, the following is a collection of Rebbe Nachman's best-known expressions in regard to this beautifully exquisite festival, translated from Likutei Etzot:

* By way of Succoth, a person merits Divine abundance, which is an aspect of a holy spirit, in other words, receiving an expanded intellect…a level of intellect beyond reach, which is the main enjoyment of the World to Come.

* Via the mitzvah of Succah, a person merits a pure heart, which enables him to outpour his speech to Hashem, to the extent where he merits new utterings that are on a level of a spirit of holiness.

* The Succah is conducive to bringing children into the world and saves from disputes and arguments, repels lies and strengthens truth; by way of Succah, the true Rebbe of the generation is revealed and 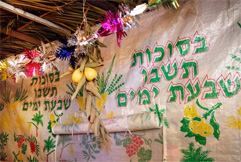 everyone returns to Hashem to serve Him as one, even the nations of the world.

* Powerful prayer, the Land of Israel and the mitzvah of Succah are one aspect, dependent on one another.

* A person who blemishes the mitzvah of Succah falls from the level of human abundance to the abundance of an animal, and because of this, animals die before their time, Heaven forbid.

* By engaging in the mitzvah of Succah, one can engage in construction without being damaged from the construction.

* The moment a person enters the Succah, he becomes merged with Torah.

* By way of the mitzvah of lulav and the other three species one reveals the holy spiritual awareness that the entire world is full of Hashem's glory and reveals His godliness in every place, even among the languages of the gentiles; one merits to get to know Hashem and to get close to Him even at the lowest of spiritual rungs; one merits to bind holy spiritual awareness to his heart so that he will have control over his heart and love himself with Hashem in true love…to the extent that peace will be spread in the world.

* The beauty of an etrog originates in the true tzaddik, who is the head-of-the-household of the entire world. By way of a beautiful etrog, one therefore merits in getting close to him and becoming a part of him; one's eyes are thus opened. The inverse also holds true, for by getting close to the true tzaddik, one merits a beautiful etrog and to fulfill this priceless and beautiful mitzvah in completeness.

* One must ask profusely for a beautiful etrog, and to cry much on Rosh Hashana and Yom Kippur to merit one; we have no idea of the tremendous lofty virtue of the mitzvah of etrog, and we cannot fathom the holiness of this mitzvah, for it hastens the building of our Holy Temple, soon in our days, may it be His will.

Breslev Israel wishes everyone a most joyous Succoth holiday! 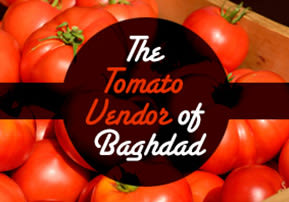 A story for Succoth: Iraq was suffering from a terrible drought. The Sultan told the Jews that if they didn't bring rain in three days, it would mean exile or death…

4 min
A Few Planks of Wood

3 min
Who is Running the Hotel in Warsaw?

Chain of an apple, pomegranate, and a cluster of grapes.   Beautiful for your Succah.   Length: 50 cm.

New at the Breslev Israel store!   Gorgeous and special! A cylinder-shaped medallion with the letter "shin" at its middle. Made out of gold-colored rhodium. Nadine Jewelry.   A special gift item! Treat yourself and your loved ones!

Chamsa Sticker - small orange - With phrase "Everything is for the best" in Hebrew - Measurements: 14 x 20 cm

Large Book of Psalms in large print!   The book provides the reader large letters and with accents that are accepted by all communities. Includes a Perek Shira and Tikkun Clali.   Highly recommended!   3Size: 3 * 22 cm   Hardcover, 415 pages