The tzaddik’s blessing is most effective when the person’s motive is to get closer to Hashem, but it is not a replacement for a person’s own efforts…

A tzaddik’s blessing is certainly worthwhile, but it is not a replacement for a person’s own efforts and obligations. A visit to a tzaddik is especially helpful when a person receives advice on how to improve his service of Hashem.

A haughty rich man once threw a gold coin to Rebbe Natan of Breslev so that Rebbe Natan would pray for him. Rebbe Natan picked up the coin and threw it right back. “What do you think?” asked Rebbe Natan. “I’m not one of your factory workers! You think you can hire me to pray for you by throwing a coin at me? If you had the slightest desire to repent and get closer to Hashem, I’d be the first one to help you, but you 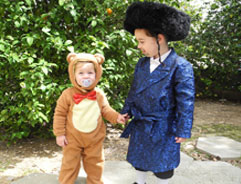 can’t hire me to do all the work for you!”

We must seek the blessings and wisdom of holy individuals and spiritual leaders to get closer to Hashem, and not simply to seek temporary relief of whatever’s bothering us. Truly, the greatest benefit of seeing a tzaddik is to obtain advice as to how each of us individually can attain enhanced spirituality and closeness with Hashem.

A tzaddik is not doing a person any favor by granting that person an unconditional blessing. Let’s use an example we mentioned earlier and explain why:

A person listened to some forbidden gossip. Shortly thereafter, he received a painful earache. Not having done any soul-searching, he made no connection between listening to the gossip and the earache.

Imagine that the tzaddik gives the person a blessing and prays for that person’s complete and speedy recovery. By virtue of the tzaddik’s piety and righteousness, let’s suppose that his prayer is answered. As a result, the person’s ear no longer hurts. But is that a blessing in the long run?

Hashem sent the earache so that the person would do appropriate self-evaluation, make a connection between the earache and the transgression of listening to gossip and slander, and consequently do teshuva, thereby rectifying the misdeed. But now, the person is left without the earache, yet he still has a nasty blemish on his soul which, if it continues to go uncorrected, could lead to additional and more severe problems in the future. The tzaddik’s unconditional blessing, therefore, does no one any favors.

The blessing of a righteous individual is wonderful when it complements a person’s own self-evaluation, teshuva, and prayers. The true tzaddikim preface their blessings with advice on what a person might do to rectify the problem at hand. Once again, a person’s own efforts, together with the tzaddik’s guidance and blessing, are a winning combination.

Serious damage could result from a tzaddik’s blessing to a wicked person. Suppose that the wicked person was ill and, as a result of the tzaddik’s blessing, the wicked person became healthy without changing his evil ways. This could become a terrible defamation of Hashem’s name, Heaven forbid. We can now understand why Queen Esther refused to intercede at first for the Jewish people, who wanted her to ask King Achashverosh to rescind the harsh decree against them. She didn’t want them to think that they could mend their misdeeds – which led to the harsh decree in the first place – by means of lobbying and political activism. Queen Esther was a brilliant woman; she wanted the Jews to trust in Hashem rather than trust in the fact that a Jewish queen dwelled in the King’s palace.

Queen Esther realized that the evil decree and Haman’s plot of genocide were the wake-up calls designed to stimulate a sincere prayer and penitence process among the Jewish people. Without their prayers and complete penitence, her efforts would be counter-productive. But when she told Mordechai to instruct the Jews to join her in fasting and prayer for three whole days and three whole nights – and they did – then a miraculous series of events led not only to the rescinding of the harsh decree, but to the downfall of their enemies.

Trust in Hashem, prayer and teshuva have been – and always will be – a template for salvation and success. Happy Purim!

Once someone is married I believe of a Tzaddik should bless a husband or wife with any blessing that will eliminate emotional scarring on a family's soul, mostly for the sake of the children and wife, the husband also. There is a huge difference between an already sensitive husband with a spiritually healthy family praying for greater awareness to a wife's and child's emotional needs and a dad trapped in anger addiction. One needs an unconditional blessing to remove the very desire to act out

Once someone is married I believe of a Tzaddik should bless a husband or wife with any blessing that will eliminate emotional scarring on a family's soul, mostly for the sake of the children and wife, the husband also. There is a huge difference between an already sensitive husband with a spiritually healthy family praying for greater awareness to a wife's and child's emotional needs and a dad trapped in anger addiction. One needs an unconditional blessing to remove the very desire to act out

"A tzaddik is not doing a person any favor by granting that person an unconditional blessing." If a married person has an addiction or issue that will lead to a divorce (which will cause emotional scarring on the wife and child's soul for a lifetime) the Tzaddik is obligated to give a blessing to remove the addiction or issue for the sake of the children, wife, husband. To allow someone to learn "the hard way" by losing everything is placing a lesson above the family unit and that's wrong.

It's easy to become distracted by the horrific realities in the Ukraine. Nevertheless, we must keep our focus on ensuring that Jews don't abandon Torah and mitzvot. This is the lesson from Mordecai!

2 min
As the Month of Salvations Approaches

Nurtured by parents who imbibed deeply from the Torah wellsprings of European Jewry ― such as Rav Baruch Ber Leibowitz, Rav Eliezer Yehudah Finkel, and Sara Schenirer ― young Shimshon grew into a world-renowned speaker, educating and influencing audiences across the Jewish spectrum. He manifested spiritual powers that seemed to transcend the forces of nature and human capacity. His heart burned with holy sparks of fervor, and those sparks grew into a mighty torch that illuminates our world with Torah, yiras Shamayim, and kedushah until this very day   Like a blazing sun, the book traces Rav Pincus’s path from the American spiritual desert of the early 20th century to Torah greatness. Based on the bestselling Hebrew biography Hashemesh Bigvuraso, it is a stirring collection of firsthand facts, hanhagos, and stories from distinguished rabbanim, talmidei chachamim, family members and talmidim who ensured that this sefer―like its Hebrew original―bears the eternal stamp of emes.   Hardbound Pages: 527

"And you took on the first day the fruit of the citrus tree ..."   A special and spectacular case for etrog   The four most special species on the holiday!   Etrog bag - a special design for a dark brown imitation leather bag with silver-colored decorations on the sides of the bag. The verse "...and you will take them for you..." is printed on the side.   Includes a leather handle, a comfortable clasp. Inside the bag you will find a sponge lining to protect the etrog and its freshness.   It is highly recommended!   Also suitable as a gift! At a price that's worth every penny!

Pizmonim for Shabbat – With Kiddush, Havdalah, and Birkat HaMazon

A magnificent full-color volume that captures the beauty of the Sephardic pizmonim Selected Sephardic pizmonim and piyuttim for Shabbat, with sources for quoted verses and details about each song’s author. Carefully researched Hebrew text and a flowing English translation. Easy-to-follow instructions in English. Yehi Ratzons for Rosh Hashanah meal. Hardcover with over 190 full-color pages Includes Kiddush and Havdalah of Yamim Tovim