The Happy Husband, Part 1 of 2

My husband, G-d bless him, is completely tone-deaf. It’s a shame, because he has good singing potential. Listening to him sing is borderline torture for me, since I, on the other hand, am very musically inclined. I play the piano, and most of what I play these days I have learned by ear. So for me to listen to notes that go together like water and oil, it’s pretty painful. Do you remember the movies where someone would scratch the school chalkboard with a nail and make that horrible screeching noise? That’s the level of pain I’m talking about. Now that doesn’t mean I can sing! Quite the contrary – I’m a worse singer than he is! At least I know that I’m a terrible singer. My husband has no clue about his problem.

My husband isn’t alone. Many husbands have a tone-deaf problem. However, the kind of issue I’m referring to isn’t a musical one- it’s a domestic harmony one. Allow me to describe a typical situation:

Isaac is a hard-working husband and father. He gets up before sunrise, runs off to the local shul for prayers, and from there grabs a bagel and coffee and heads off to work. He spends hours fighting rush hour traffic to 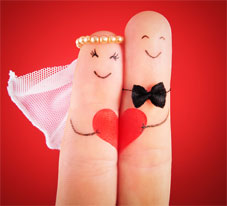 and from work, and during his actual workday he’s bombarded with all kinds of pressures from his boss and colleagues. He’s got deadlines to fulfill and without his timely contributions to his company’s projects, nothing would move forward. He barely gets a half-hour to fly to the coffee shop downstairs in the lobby and snarf down some sandwich which he has no time to actually taste, before he has to run back upstairs and continue his daily work marathon until it’s time to go home. And, of course, work doesn’t end when he gets home. He’s got to continue working into the middle of the night just to keep up with the supersonic pace his company is moving at.

Needless to say, Isaac is exhausted and overwhelmed.

Isaac’s wife, Rivka, isn’t exactly on vacation herself. She’s got three kids to take care of from morning to night all by herself. She, too, has to get up before sunrise, make their lunches, fight with them to get up and get dressed, give them breakfast, and get them to school on time. Any mom understands that by the time she drops them off she’s already exhausted, physically and mentally. She has to rush to her own job across town, and, oops, she forgot to eat breakfast! Starving and with a caffeine headache, she bustles into her office and runs to the coffee machine to get her much-needed morning fix. Food will have to wait ‘till later. Rivka spends the next five hours at her desk, in meetings, taking phone calls, and by the time she remembers to eat something it’s time to pick up the kids from school. So she grabs another coffee on her way out.

After she gets home with the kids, it’s homework-fight time for the next two hours. Somehow she manages to throw together some dinner in between round two and round three. Then it’s shower-fight time. Then it’s go-to-bed-fight time! And Rivka hasn’t stopped for a moment. She’s absolutely finished by the time Isaac gets home, and the kids are gleefully skipping around the living room, taking full advantage of her semi-comatose state.

The one thought that kept her going all day was that her husband would be home in the evening and would be able to help her. He would be her emotional support, giving her comfort and calming her down during her stressful time.

That’s not exactly what happens, though.

Isaac drags himself through the door at 8pm, hungry and irritable. The kids run to him and nearly tackle him with their hugs and kisses. Although she’s exhausted, Rivka gets up and smiles at Isaac, happy that he’s home. She feels safe and complete.

Isaac, on the other hand, is in no mood to smile. Without so much as a glance in her direction, he mumbles, “Where’s dinner.”

He has no idea that he has just broken her heart.

All of her hopes for a quiet evening together have vanished – like magic. She struggles to fight back tears as she serves him dinner without a word. Soon after, however, she can’t hold back anymore and snaps. She starts to nag him about everything: “Why are you so late? Why do you always leave your shoes in the middle of the living room? Why can’t you put your plate in the sink when you’re done? Put those kids to bed already!”

Their night goes from bad to worse after the kids are asleep. Their fighting leads him to sleep on the couch. The next day, both of them are extra tense at work. That night Rivka doesn’t even bother to serve him dinner. He can get it himself. Isaac is resentful that his wife didn’t do her wifely duties and have a plate ready for him.

Pretty soon the kids pick up on the tension and they start to act up. This only adds to the problem, and before they know it, their marital fights are spiraling out of control. Isaac thinks he’s the victim of an impossible wife. Rivka thinks she’s the victim of an ungrateful husband.

Who’s right? To be continued…

The wife is like the moon, completely dependent on the sun for her light. If the husband does his job and shines love and light on her, she’s happy and fulfilled...

A 100% cotton tzitzit undershirt that is the ultimate in comfort and does not have to be readjusted all day long. This item strictly adheres to the halachic requirements of a tzitzit garment and is certified kosher by Rabbi Aryeh Levine shlit"a. Size 14 (suitable for ages 11-12) Your children will love this comfy tzitzit undershirt!

Meet "The Four":  - a graduate of Ponovezh Yeshiva in Israel, currently working as an accountant  - a Catholic architect from Sao Paulo  - a Conservative Jew, working as a lawyer based in London  - a Reform Jew, working as a Los Angeles real estate agent   Four men, all strangers to one another. They come from four different countries, with four different professions, four completely different backgrounds.   Called to Geneva by an enigmatic letter, they discover they share the same birthday - and the same mysterious tattoo.   They are four men who will share millions upon millions of dollars - or the same frightening fate.   The Four is a riveting and action-packed thriller that entertains, and enlightens, at the same time!   Hard cover, 359 pages.

Rav Nosson Tzvi: The Beloved Rosh Yeshiva of Mir through the eyes of a mother and the eyes of a talmid Written in close conjunction with the Rosh Yeshiva of Mir's family, this moving volume includes more than 100 photographs, including  many rare family photos. Meticulously researched, it is based on more than fifty interviews and hundreds of testimonials from close family, members of the Mir Yeshivah, Rabbis who worked with the Rav and his beloved talmidim.    By Rebbetzin Sara Finkel and Rabbi Yehuda Heimowitz

Very moving and inspiring! Melodies and songs from the Torah of Rebbe Nachman of Breslev. By HaRav Shmuel Stern Order Now!

Decorative Havdalah candle in a beautiful golden color.   Silver-colored stand has the caption "בורא מאורי האש (Who creates the illuminations of the fire)".   Hand-crafted.   Height: 28 cm