The Early-Warning System for Yom Kippur

The Prophets of old must have had a tough time before Yom Kippur. Hashem commands them to chastise the people, but frequently, the people just didn't want to hear... 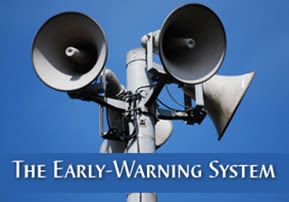 The Prophets of old must have had a tough time before Yom Kippur. Hashem commands them to chastise the people, but frequently, they just didn't want to hear. And, you're not talking about secular Jews – these are the "religious", the ones who could be found in the courtyard of the Holy Temple.

Ezekiel, like the prophet Jeremiah before him, had a tough assignment: he had to persuade a bunch of spiritually corrupt, hypocritical, complacent people that G-d was really, really serious about breaking up their party, one way or another.

Either, He was going to destroy Jerusalem, and the temple, and the environs, and kill a whole bunch of people and then send the survivors into exile in Babylonia; OR, the people could stop ignoring all the messages and

signs He was sending them, via His prophets, and start sincerely keeping His commandments. All of them. Even the 'fanatical' ones had to stop sleeping around, refrain from breaking any law that stood in the way of making a quick buck, and cease ridiculing and dismissing G-d's official spokesmen.

They picked option one. They let Jerusalem be destroyed and themselves go in exile.

A few reasons: first of all, for every 'hard' message they were getting through Ezekiel and Jeremiah, they were getting a whole bunch of reassuring and 'soothing' messages from the fake prophets, like Pelatiah ben Benaiah and Jaazaniah son of Azzur. "Don't worry!" these fakers would tell them. "I just spoke to G-d, and He assures me that everything's fine! Carry on exactly as you were, you have nothing to worry about!"

Even after Pelatiah ben Benaiah drops dead in the middle of one of his rousing speeches, the people still don't take it to heart. "He ate far too much meat," they explained to each other. "His cholesterol was through the roof…it was really only a matter of time."

The second reason they chose option one was because the vast majority of the people were religious hypocrites. In one particular poignant passage, G-d bemoans the fact that the very same day that they've just sacrificed one of their kids to Molech, or whichever pagan idol happened to be the flavour of the month, they show up in the temple to offer a lamb, or some other pet, to G-d.

"Ezekiel," G-d says, "it would be better for everyone if they at least stopped pretending, and just went with their idol-worship 100%. At least then, it wouldn't make the people who really believed in Me also look so bad!"

G-d gives Ezekiel a vision where He shows him exactly what He's talking about: G-d gets Ezekiel to tunnel through a wall into a secret room, and low and behold, the place is full of the 'Elders of Israel' offering up incense to a whole bunch of idols.

"G-d has no idea what we're up to!" they chortle to themselves. "Even if He really exists, He can't see what we're doing in our secret rooms, upstairs, with completely uncensored internet access…"

A few years' later, once the prophesies of Jeremiah and Ezekiel actually start occurring, and Babylonia is on the threshold of conquering Jerusalem, the people come back to Ezekiel, completely despairing.

"OK, you were right," they concede. "We didn't believe you, and now we're all going to die a horrible death."

But even at that point, G-d hadn't given up on them. "I don't want your deaths," he tells them via Ezekiel, "I want your sincere repentance! Even now, if you came clean and stopped pretending to be perfect, and humbled yourselves and threw out all your I-dols, I'd forgive you all in a jiffy, and your lives would be saved!"

But the people aren't interested in G-d's proposal. They go back to their homes, and write a scathing 'opinion' calling G-d a religious fanatic on their Facebook page, because what else are you going to do, if you only have five more days to live?

Poor Ezekiel. You read his book, and you kind of wonder why he persevered, when no-one was listening, or changing, or taking anything he said to heart. But G-d also explains that part of things. He tells Ezekiel: "You are the early-warning system. If I tell you that so-and-so is going to die because of his wicked deeds, then you have to warn him, even if he doesn't listen to you, because at least that way, you've done your part.

"And ditto for the righteous people who are copying all the wickedness around them. Go and tell them what's in store for them if they don't stop all the nonsense, and if they're really righteous, they'll listen to you, change, and save their lives."

And if not…well, at least Ezekiel had plenty of people to pray for on Yom Kippur. 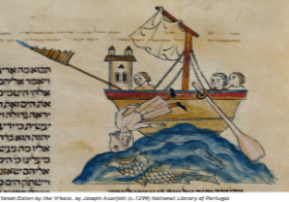 Yonah and the Whale

5 min
The Most Beautiful Day

A pack of 50 wicks for lighting a Ner Tamid in olive oil. The wick threads are made ​​of fine cotton fibers and coated in paraffin, lending them stability while floating in oil.

Are you experiencing hot flashes and sleep disturbances? Would you like to improve your ovulation and ovary function?   New! A unique formula for perimenopause symptom relief by Dr. Gila Gavrielov, PhD in Behavioral Science and Gemology, a specialist in diagnosis and healing with crystals.   This unique essence is designed to bring relief to perimenopause symptoms and aid in adjusting to this new stage in life. It is used for treating hot and cold flashes, sleep disturbances, stomach acid release and for improving metabolism. It also improves ovary function, strengthens ovulation, improves calcium absorption, calms the stomach, treats constipation, moodiness, muscle pain and fatigue.   Please note: Dr. Gila Gavrielov's tinctures are totally free of chemicals and side effects. The tinctures are based upon the frequency emitted by the Hoshen stones and are meant to help you heal naturally through an extraordinary method based on healing via fluctuating energy. The tinctures help to alleviate or eliminate unwanted behaviors, perceptions and qualities such as fearfulness, uncertainty, lack of self confidence, anger, jealousy, disturbances, imbalances, post traumatic stress disorder and more while helping you bring out your good qualities in the best way possible.   Everyone feels and reacts to the energies emitted by gemstones thanks to their crystal structure that transmits very concentrated and clear frequencies. Every stone, according to its particular mineral content, emanates its own unique and potent energy.   Price is per unit.   Certified kosher by Rav Landau shlit"a.

A “Woman of Valor” silver necklace with opal stones

Chain "Woman of Valor" with opal blue - French artist Moses! A very unique and impressive "Eshet Chayil" necklace, a double drop (drop inside a drop) with "Eshet Chayil" embossed in the back, an inlay of spectacular blue opal stones. A 925 silver necklace by the artist Moshe French. An amazing and unique gift for every woman and girl!

Author: Sara Wiederblank   Meet the teachers and administration of Bnos Ashreinu High School:   - As the senior secretary and close confidante of the principal, Ariella Lieberman has her finger on the pulse of the school. Students and teachers alike turn to her for clarity and advice, but who can she turn to when issues in the school office come to a head?   - Chava Liba Steiner is 25 and still single, but change might just be around the corner for her...   - Batya Levy has a packed schedule. This energetic Bnos Ashreinu teacher gives her students and her job her all... perhaps even too much?   - The legendary Mrs. Batsheva Hertzberg is a powerful mechaneches whose drive propels the school and the students to strive for great heights. This year she's undertaken her most ambitious project yet. Will it pan out the way she hopes?   Hard cover, 320 pages