Sometimes, in their quest to be "frum", people forget that their tongues must be holy; especially on Succoth, one should never discredit another person…

"During these seven days you must live in Succahs (thatched huts). This is so that future generations will know that I (G-d) had the Israelites live in Succahs when I brought them out of Egypt.” Leviticus 23:42-43

One year, in the holy community of Kitov, it poured with rained on the first night of Succoth. Rabbi Chaim, a great Torah scholar and opponent to the fledgling Chassidic movement (“the Sect”), was slightly aggravated that he would not be unable to enjoy the first night in the Succah (thatched hut covered with schach [typically branches or bamboo] so that the stars are visible). While waiting in his house for the rain to abate, R. Chaim saw one of his acquaintances casually walking down the street as if he had already finished his Yom Tov meal in the Succah. When Rabbi Chaim inquired as to where he was going, the man told him that he was returning from having dinner in the Succah of Rabbi Gershon Kitover (the brother-in-law and close follower of the Baal Shem Tov). “And Rabbi Chaim,” he continued, “there was a miracle there because not a single drop of rain 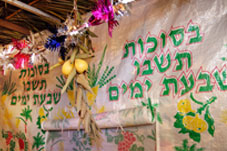 was falling through the schach.”

Rabbi Chaim asked his son to go to Rabbi Gershon’s Succah and see if it really wasn’t raining there. When his son came to the Rabbi Gershon’s Succah, he looked in and sure enough, everyone was sitting, talking and eating. There was not a single drop of rain coming through the schach into the Succah. Rabbi Gershon invited Rabbi Chaim’s son to join them but he refused, explaining that he had to return to have Yom Tov dinner with his father.

When the son returned, he told his father, R. Chaim, that it was true. “Father, Rabbi Gershon was sitting in his Succah, and I saw with my own eyes that there was not even a single drop of rain coming into the Succah.”

Rabbi Chaim rolled his eyes. Of course he believed his son’s report but he wasn’t that impressed. The rain finally relented and Rabbi Chaim and his son went into their own wet Succah for Kiddush and the Yom Tov meal. Naturally, they discussed the miracle of Rabbi Gershon’s dry Succah and other miracles that the so-called tzaddikim (Holy men) of The Sect were able to do. Rabbi Chaim said, “In my opinion, creating such miracles, as obviously done by our friend Rabbi Gershon, is against the spirit of the Torah.”

Early the next morning, Rabbi Chaim and Rabbi Gershon met on their way to the mikveh (ritual bath), in preparation for fulfilling the mitzvah of the lulav and esrog.

“Rabbi,” said Rabbi Gershon to Rabbi Chaim, “I understand that you were sitting in your Succah last night and speaking loshon hara (slander) about me.” Rabbi Chaim answered with astonishment, “How did you find out about what I said in my Succah? I was sitting there completely alone with my son. And I’m sure he didn’t tell you what I said. The only logical answer is that a Heavenly angel told you. But that seems impossible because an angel does not have the authority to speak loshon hara.”

And so it was.

***
Tzvi Meir Cohn attended Yeshiva Hadar Hatorah in Crown Heights, Brooklyn after completing his university studies in Engineering and Law. While studying at the Yeshiva, he discovered a deep connection to the stories and teachings of the Baal Shem Tov. His many books about the Baal Shem Tov can be found on Amazon. He can be contacted at  howard@cohnpatents.com.

Noam always wins the annual school prize for "Most Original Purim Costume" with his self-styled creations. So why does he of all people have tears streaming down his face this Purim?   Malky is smart, mature, and responsible. What makes her suddenly stick a bed halfway out her bedroom window?   Shimshon terrorizes other kids. What can possibly make him change from being "Shimshon the Strong" to "Shimshon the Kindhearted"?   Zehava and her siblings fight with each other all the time. Do you think a baby only two days old can change that?   Fourteen boys and girls are the heroes of Kids Speak 9!   Hardcover   Pages: 208

More than 75 years have passed since Klal Yisroel suffered the horrors of the Holocaust. Despite the odds, Hakadosh Baruch Hu (the Holy One, Blessed be He) gave us the strength and courage to rebuild from the ashes. Yiddishkeit is thriving in cities and countries spanning the globe. A grocery store in Monticello and an electronics store in Brooklyn are targeted by evil perpetrators. Are they carrying on the cruel legacy of the Nazi regime? A Jewish cemetery in Europe is slated for destruction. Who is responsible for this horrifying decision? Two young boys are trapped in the home of a former SS Commanding Officer. Will they escape before it's too late? Trapped in Terror is a thrilling and suspenseful ride that will leave you breathless from the first page until the last! Read and enjoy!

Rav Arush's prayer to be said before "Asher Yatzar," taken from the siddur "Lev Shalom," translated into English, followed by the "Asher Yatzar" blessing in transliterated Hebrew.   Magnetic backing.

The kidslide is a supplementary product to the Makrentz'ik that is sold seperately.   Insert this kidslide into the Makretz'ik and watch the famous story of Yosef Honors the Shabbos. 12 minutes in length. The slide can be set for ongoing listening, audio only and other settings.   Yoel Waxberger has outdone himself with this very creative item - a kid-friendly projector. With the click of a button it projects onto your wall stories alongside audio of our Sages such as Yosef Honors the Shabbos, This Too is for the Best and more. Vivid colors and high quality audio make the stories come alive.   When your children go to bed at night, you can set the projector to the ceiling for exciting story time filled with Jewish values, fun and adventure. The beloved Kopla personality is integrated into the stories, which kids endlessly enjoy.                                          Approved by Rabbanim and educators shlit"a.   An educational and fun activity your kids will love!