Nature’s Song of Thanks – Perek Shira

Who cares what frogs, rats or vegetables say when they speak to G-d? Does it really matter? Perek Shira - "Nature's Song" - is more than what meets the eye... 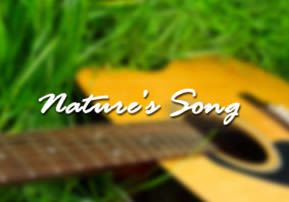 A little while ago, I had the privilege of seeing Rabbi Lazer Brody in action, when he came to give a talk in my village. If you've never seen Rabbi Brody live, it's well worth the effort. Every time I'm starting to feel overwhelmed by life, I try very hard to come into Jerusalem for his Wednesday night class, and by the end, I always feel like I've been brought back to life.

This time, Rabbi Brody was talking about 'Perek Shira', which is a collection of verses culled from Psalms and other sources, where all of creation is praising G-d.

one of my Haredi friends in the know.

"You'll see big miracles!" she told me. "But you have to tell everyone about the salvations you get, so that more people will be encouraged to do it!"

I have to say, it was really tough going. I said it in English, as I had non-existent Hebrew at the time, and it seemed to be one of the most tedious half hours I ever spent in my life.

To try and help myself 'get into it', I bought a book to explain what was going on a bit more, and more of the deeper ideas behind it. It was a nice book, and it definitely helped. But it was still a struggle to say it every day. I kept going, because I was asking G-d for a massive financial miracle, and that was enough to keep me reading Perek Shira for a month and a half.

On day 39, we got an email from the people buying our house, telling us they were exercising their 'option' to ask us to leave earlier than we'd agreed, as they'd just managed to sell their house. At the time of agreeing that option, we had no where to go to ourselves, so we were happy to be flexible. Six months later, we'd signed on a different house that was only going to be ready in another four months – and in the meantime, we now had a month to get out.

I have to say, I was quite perplexed by the 'miracle' that G-d had done for us… I was thinking about a lottery win, or a great job offer, or a miraculous financial turnaround, not a premature exit from our house to who-knows-where. So I didn't exactly 'publicize' the miracle.

With hindsight, of course, it was clear that G-d knew exactly what He was doing. The very next day, we found an apartment in a completely different part of Israel, near to Jerusalem, for exactly the amount of time we needed. The rent on that apartment was a third of the mortgage we were paying.

But that's not all: within six weeks of moving, my husband was offered a great job in Jerusalem, after he'd been looking for something suitable for months and months.

But that's not all: we liked the new place so much, we decided to sell the other house that we'd bought – before we even lived in it – and to stay in our new location. After a year and a half, G-d found us a steal of a house for a bargain price, even though the local property market was already starting to heat up all around us.

But that's not all: for the three years we stayed in that place, I went from being a flamboyantly wasteful 'big spender' to having a much simpler, cheaper lifestyle. (If I'm honest, it went a bit too far in the other direction, but that's a story for another day.)

When we finally left, my spending habits and attitude to money had transformed completely. We still had debts (but much fewer than before), but now, we also had a lot more emuna that G-d was going to help us to get our finances sorted out, and gratitude for the money and stuff we actually already had.

It took three years for me to really see the miracles that were sparked off by that Perek Shira, and another three years to really start to appreciate them. When Rabbi Brody explained that saying Perek Shira gets all these heavenly angels behind your prayer request, and that's why it's such an effective 'segula' for all sorts of things, especially making a living, I realized it was time to do it again.

So when (not if…) the miracle occurs this time around, I'll hopefully do a much better job of publicizing the miracle without having to wait seven years.

The single, most important factor in determining your happiness is being thankful for what you have! Try these proven ways to grow your gratitude and live a happier life.

3 min
The Deeper Meaning of Psalm 100

Laws of Teshuva by the Rambam

A booklet containing ten chapters in the Laws of Teshuva from the Rambam. Includes prayer from the Rebbe Natan's Likutei Tefillot ח"א and י"ז about teshuva.   11.5X8 cm, 92 pages, paperback. HEBREW.   Highly recommended, a must in every pocket !!!

Bottle opener in the shape of a bottle with a plaque. On top is inscribed "Jerusalem".   With the blessing of the "Creator of the Vine", which is also a magnet!   Size: 11.5 cm.

New at the Breslev Israel store!   A beautiful mahogany and silver tray with the words, "Shabbat and Yom Tov". Beautifully and uniquely designed. 30x44 c"m.   Enhance your Shabbat table with this beautiful item!   A beautiful gift item!

Are you feeling emotional stress? Want to balance your red blood cells?   New! A unique formula for spiritual development by Dr. Gila Gavrielov, PhD in Behavioral Science and Gemology, a specialist in diagnosis and healting with crystals.   This unique essence is designed to help you put your ideas into action, bring out lofty feelings, balance red blood cells, balance thinking and movement, increase self confidence, release emotional stress, improve positive thinking, calm muscular stress and maximize your energy. Best of all, it aids in your spiritual development and in making the most of your potential!   Please note: Dr. Gila Gavrielov's tinctures are totally free of chemicals and side effects. The tinctures are based on the frequency emitted by the Hoshen stones and are meant to help you heal naturally through an extraordinary method based on healing via fluctuating energy. The tinctures help to alleviate or eliminate unwanted behaviors, perceptions and qualities such as fearfulness, uncertainty, lack of self confidence, anger, jealousy, disturbances, imbalances, post traumatic stress disorder and more while helping you bring out your good qualities in the best way possible.   Everyone feels and reacts to the energies emitted by gemstones thanks to their crystal structure that transmits very concentrated and clear frequencies. Every stone, according to its particular mineral content, emanates its own unique and potent energy.   Price is per unit.   Certified kosher by Rav Landau shlit"a.

Three-Dimensional Kit to Construct a Model of the Beit HaMikdash

A kit for making a model of the Beit HaMikdash   In every prayer, we pray, "... and our eyes will behold Your return to Zion" - to see and envision the Temple building in Jerusalem. For now, we have not yet merited to see the Temple, but today we can be the 'Builders of the Temple'.   In the model of the Temple, we can build, create, and enjoy the wonderful feelings that we have in our long-awaited 'Temple'.   Although this is only a model, every day when we look at our work, we will remember that we must do everything to expedite the coming of the Mashiach, in order to win the true model - the building of the Temple!     The child will learn about the different places, the temple vessels, the gates, and the various areas while creating an experiential and wonderful feeling that the long-awaited ‘temple’ is in his hands.   The kit is made of a huge and luxurious three-dimensional sample from quality laminated cardboard. Pieces are ready for self-assembly - no need for cutting.   Dimensions of the model after assembly: Length: 75 cm Width: 38 cm Height: 24 cm