G-d of Rebbe Meir, Answer Me!

Pesach Sheni, the fourteenth of Iyar, is also the yahrtzeit of Rebbe Meir Baal HaNess, whose ability to invoke miracles is still at our disposal today… 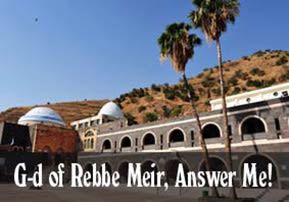 Rebbe Meir, a third-generation Mishnaic sage or Tanna, is affectionately known as Rebbe Meir “Baal HaNess”, or “Master of the miracle”. He is one of the most quoted sages in the entire Talmud and one of the five (some say seven) latter pupils of Rebbe Akiva. His father, a righteous convert, was a descendant of the Emperor Nero.

The Gemara (tractate Avodah Zara, 18a-b) tells us that Rabbi Meir was married to Bruria, a brilliant woman and the daughter of the holy Rabbi Chanina ben Tardyon, one of the ten martyrs whom the Romans persecuted. The tyrannical Roman occupiers sentenced Rabbi Chanina and his wife to be executed for teaching Torah publicly. They sentenced his daughter – Bruria’s sister – to be placed in a brothel. 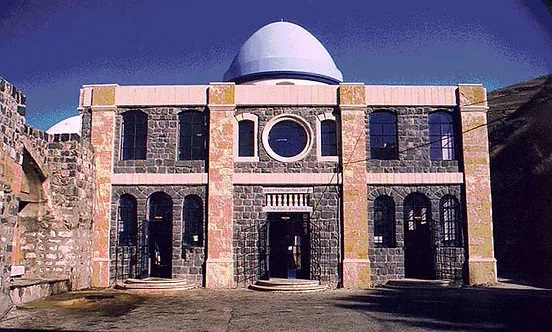 Bruria asked her husband to save her sister. Rabbi Meir took a bag of gold coins and said to himself, “If she has remained chaste, a miracle will occur for her, and if not, there won’t be a miracle.”

He then went to the brothel disguised as a Roman cavalryman, and asked her to sleep with him. She refused, claiming she was in the midst of her menstrual period. When he offered to wait until it was over, she said, “There are many other women here that are more beautiful than I.” He then realized that she used this tactic with everyone who sought her and concluded that she indeed maintained her chastity.

The disguised Rebbe Meir then he offered the gold coins as a bribe to the guard. The guard replied, “When my supervisor comes, he will notice one girl missing and he’ll kill me.”

Rabbi Meir answered, “Take half the money for yourself, and use the other half to bribe the officials.”

The guard argued, “And when there is no more money, and the supervisors come – then what will I do?”

The guard was not yet convinced: “How can I be sure that this will save me?”

Rabbi Meir replied, “Look – there are man-eating dogs over there. I will go to them and you will see for yourself.” Rabbi Meir walked over to the dogs, threw a clump of dirt at them, and they ran at him to tear him apart. He cried, “G-d of Meir – answer me!” and the dogs retreated. The guard was convinced, accepted the bribe and he gave Rebbe Meir Bruria’s sister.

The story’s not yet over: When the group of supervisors came, the guard bribed them with the money. Eventually, the money was used up, and it was publicized what had happened. They arrested the guard and sentenced him to death by hanging. They tied the rope around his neck and he said, “G-d of Meir – answer me!” The rope tore, much to everyone’s amazement. He confessed, so they put out a warrant for Rebbe Meir’s arrest. The guard was saved.

The Romans distributed an engraving with Rebbe Meir’s likeness on it and proclaimed that anyone seeing such a person resembling  should turn him in to the authorities. One day, some people spotted him and ran after him, so he fled and entered a harlot’s house. They barged into the house in pursuit. Eliyahu HaNavi – Elijah the Prophet – appeared to them as a harlot who embraced Rebbe Meir. “If this was Rebbe Meir,” they said to each other, “he certainly would not have acted like this!” Rebbe Meir escaped and fled to Babylon.

Ever since, there is a surefire tradition in Judaism that when a person is in peril, Heaven forbid, he should give charity, and dedicate it in the memory of Rabbi Meir Baal HaNess. He should then say “Elaka d’Meir aneni” – three times, which means, “G-d of Meir – answer me!”

Rebbe Meir’s yahrtzeit, the anniversary of his death, falls on Pesach Sheni, the 14th day of Iyar, which this year falls on Sunday, May 15, 2022. This is a special day to give charity in the name of Rebbe Meir and to ask for all your heart’s wishes. Even better, try to visit Rebbe Meir’s holy gravesite in Tiberias, overlooking the Sea of Galilee. It’s a special place where thousands flock to, for many have seen miracles in their own lives after visiting there.

May Rebbe Meir’s holy memory intercede in our behalf, amen!

When a person is in peril, Heaven forbid, he should give charity, and dedicate it in the memory of Rabbi Meir Baal HaNess. He should then say "Elaka d'Meir aneni" - three times,

On Shevi’i shel Pesach, Nachshon ben Aminadav’s emuna brought about the survival of an entire nation. Imagine that your emuna, your personal holiness, your interpersonal relationships, your teshuva can save every Jew on the planet! It is an auspicious time when the Creator helps us make new beginnings. Let’s take advantage of this opportune time!

4 min
Bring Out The Best In Yourself

4 min
Come Back to Life and See the Good

Farmer Greenfield's Big City Adventure The Artscroll Middos series features exciting and fun stories with beautiful pictures, each imparting a unique and valuable lesson about good middos. Mendy is always looking for ways to help but finds his hands full when the Greenfield family gets stranded in the city. Join them on their adventure! By Esther van Handel and Miriam Adahan. Illustrated by Chagit Migron. Artscroll Middos Series. Hardcover.

A unique and entertaining collection of Irish country-themed Jewish music by Avishai Amitzur and his band, Lechatchila. 24 tracks. Highly recommended!

A beautiful, white tallit made of 100% wool, with black stripe.   Knots are hand-made by Gd-fearing Talmid Chacham.   Size: 5