The presumptuous fowl thought that they could manage their own affairs better than the farmer could. They decided to hold democratic elections… 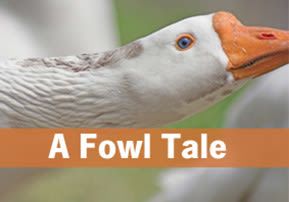 The farmer was so frustrated – the fowl in the barnyard just couldn't get along. They had plenty to eat and drink. They had dry bedding. They had a spacious barn and a beautiful barnyard with lush green grass and clear-water fish pond. The farmer provided them with all their needs. Yet they never seemed to be satisfied. If envy were fire, then the poultry barn would have been burned down long ago. In fact, the farmer had lost two previous poultry barns due to fires. He certainly didn't want to lose a third one.

The presumptuous fowl thought that they could manage their own affairs better than the farmer could. One night, they held a clandestine meeting in the barnyard, thinking that the farmer was asleep. They decided to hold democratic elections. Whoever would receive a majority would govern the poultry barn.

The wise farmer was well-aware of everything that transpired in the barnyard. The chickens, turkeys, ducks and geese had never noticed the tiny yet sensitive monitors connected to the barn's rafters which enabled the farmer to see and hear everything. “If the silly birds think they can handle their affairs better than I can, let them

During the weeks preceding the elections, the inter-poultry relations deteriorated to a new low. Instead of each flock presenting its own positive program for poultry progress, they just disparaged one another. The barnyard bickering became bitter and unbearable.

The turkeys pranced around haughtily, always pointing an accusing wing at the chickens and complaining, “We're sick and tired of supporting you chickens. The farmer makes a mint selling our wing feathers as quills, for scribes the world over uses them to write Torah scrolls, tefillin and mezuza parchments. It's about time the rest of you freeloading fowl stop depending on us for income. Go to work!”

The geese, just as smug as the turkeys, honked to no end in the chicken's faces too. They'd boast, “Do you know why the farmer has no dogs? We are better that watch dogs! Thanks to our honking, everyone in the barnyard knows when a stranger is approaching. And furthermore, we bite too! An unwelcome visitor doesn't easily forget being snapped in the leg by a goose. It's about time the rest of you parasitic chickens begin contributing to the defense of the barnyard. Do you expect our goslings to put their lives on the line at a young age while your chicks just chirp away? No way! Enough with the preferential treatment of chickens. You must begin to equally share the defense burden…”

"And the economic burden too," added the turkeys.

The ducks had nothing against the chickens. In fact, they had always lived in peace with the chickens. Yet, the ducks saw that if they don't make a coalition with the powerful turkeys and geese, they might lose all influence in the barnyard and become outcasts just like the chickens.

The chickens suffered non-stop humiliation. The other birds united against them. One undaunted hen got up from her coop and gave a clucking cry, “So what if our husbands don't seem to be working or defending the barnyard? Our master the farmer has tremendous joy and gratification from our husbands' crowing at the crack of dawn. This wakes him up every morning. By virtue of our roosters' crowing, the farmer gives us feed, water and fresh bedding every day. Besides, the eggs that we lay are what really generates the bulk of the income in the barnyard…”

The turkeys gobbled and the geese honked at the top of their larynxes, drowning out the chickens. “Are you hens crazy?” they guffawed. “Who ever heard such nonsense! Do you really think that your roosters' crowing is what defends us? We defend ourselves! Your husbands are a bunch of lazy cockadoodles. And as far as your eggs are concerned, all do is make baby chicks all the time while freeloading from our already strained economy. Go to work! Stop having so many baby chicks! Send your husbands to help defend the barnyard!”

Then, an argument broke out among the chickens. The black roosters refused to participate in the barnyard elections. "Since the beginning of our existence, our unwavering allegiance has been to the farmer. We don't recognize any fowl regime. No one will ever force us to stop crowing."

The white chickens and the brown chickens protested, "But we must be a part of the system! We must have our own political power; how else will we receive a fair share of feed, water and shelter? And, if we're not in the government, the whole barnyard will lose its allegiance to the farmer. We might even lose the right to lay eggs and to crow."

The non-stop arguing in poultry barn was like one big boiling cauldron. The chickens couldn't even get along with each other. Now that the black chickens had boycotted the elections, an argument broke out between the white chickens and the brown chickens. The white chickens wanted sweet chicken feed, while the brown chickens demanded spicy chicken feed. Consequently, they split into two separate parties. If that wasn't bad enough, the brown chickens couldn't decide on a leader, so they appointed three brown roosters to jointly run the party affairs. Yet, in all the history of poultry, three roosters have never been in agreement on anything…

Sure enough, the elections were inconclusive. The chickens lost much of their electoral power because of those who refused to vote and because of their lack of unity. The ducks received slightly more votes than the other flocks, but lacked a majority. In order to govern, they needed the geese and the turkeys.

Meanwhile, the geese and the turkeys made a pact – either they go into the coalition together or not at all. The ducks had a difficult time dealing with all the geese-and-turkey demands, but in the end, gave in. Don't expect ideology in poultry politics…

Meanwhile, with chaos in the barnyard, the weasels, foxes and wolves are lurking this very moment in the forest right outside the farm's borders, just ready to devour all the plump poultry. The farmer knows that they are there, and only his constant vigilance keeps the predators away.

What a delightful way to clearly and simply show the state of affairs in societies at large today; especially in Israel and Israeli politics! Kudos to you R. Brody! There's even a Purim connection in it: HaShem concealed as HaMelech in the Megila and "concealed" as the Farmer in the story. Bravo!

What a delightful way to clearly and simply show the state of affairs in societies at large today; especially in Israel and Israeli politics! Kudos to you R. Brody! There's even a Purim connection in it: HaShem concealed as HaMelech in the Megila and "concealed" as the Farmer in the story. Bravo!

Israel The ducks, geese, and turkeys are nonreligious Jews in Israel who work and believe that Israel is sustained by good politics. The chickens are obviously the religious Jews. The story is to show that Israel is the farm that is miraculously sustained by the Farmer, However, I will say that I think the chickens should always keep themselves in top shape, too. Prove to the other fowl through your actions that you are, in fact, impeccable in your own character. Then the others will listen.

Is Israel's future really bound up with American politics and diplomacy? Let's review how Avraham Avinu dealt with conflicts between Hashem's commands and outside cultures.

3 min
The Jew and the Tattoo

Author: Rhona Lewis How far will a person go to receive a nod of acceptance from the people around them? Join Laiky, Rivka, and Adi as they struggle to find the answer to this question.   Laiky has worked hard to build the perfect family, but she has a secret. Can she stand tall when all she has kept hidden is revealed? Will she fight to become the principal of Bnos Shifra's new branch so her image of a perfect family is cemented, or will she relinquish her dream and take on a job that others consider beneath her?   When Rivka married into the Gold family, she wasn't aware that she was going to have to cajole her husband Chezky into living up to her in-laws' high expectations. When she is forced to step into battle with Laiky over the new principal job, she must decide if she will succumb to their pressure or stand tall on her own.   Ex-convict Adi is desperate to make herself a new life, but she lacks the tools and she ignores the warnings to keep her past a secret. Is she destined to remain on the fringes of society?   In this novel, popular writer Rhona Lewis pushes us to re-examine the way we relate to the people around us who don't slot into the image of perfection. This is a story of conflict and hope, that will give you the courage to become who you really are.   Hardcover, 336 pages

New at the Breslev Israel store!   A green, hamsa-shaped sticker with the caption: There is No Despair in the World at All. Hebrew. 16x23 c"m.   Cute item! Order today!

Dreidel A nickel-plated draidel in a Jerusalem skyline design, inlaid with multicolored crystals. Height: 4 c"m. A decorative item that is fun for the children and makes for a nice gift as well!

Box of Cups of Oil for Chanukah Lighting

A unique set of 44 cups of solid olive oil - The Temple!   A pack of 44 cups of ready-to-light solid olive oil suitable for Shabbat and Hanukkah candles. High quality candles -no liquid, no smell, and no smoke. Easy and convenient to light and safe. Lites last for about two hours. Made according to the standards of the Haredi community.   Cup diameter: 20 mm   90% olive oil + 10% paraffin.

New and Unique! A beautiful gift for your precious little one! Reishis Mitzvos is a one-of-a-kind, beautiful siddur, specially designed for the age during which children begin to learn about making the basic blessings. The siddur introduces children to their daily prayers and blessings and includes colorful illustrations that really bring the point home. Each page is laminated, allowing for long-term use. The siddur is white on the inside and bound in a colorful blue cover. The most cherished gift you could give your precious little one! Now at a great price!