Parental influence plays a big role in a child's life, and often determines whether the daughter will grow up to be a Miriam Bilega or a Yehudit Maccabee... 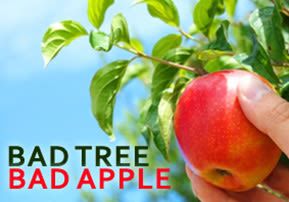 An old Ukrainian folk expression says that bad trees yield bad apples. And in like manner, the down-home American saying is that the apple doesn't fall far from the tree.

And the Gemara agrees.

The Gemara on the last page of tractate Succa tells a hair-raising story of a young Jewish woman who was the daughter of Bilega, one of the twenty four priestly clans, or “orders” of Cohanim. This young lady, Miriam, not only went “off the derech” as we unfortunately say nowadays, but she surpassed her Helenistic peers and became an apostate. She even married a Greek officer!

And that's not all…

The Gemara tells the story like this: Our sages teach that Miriam the daughter of Bilega became an apostate, and was married to an officer of the Greek kingdom. When the Greeks entered and defiled the Holy Temple,

she entered with them. She took off her sandal and smacked the holy altar with it, an act of unprecedented insolence. She then said: Lykos, Lykos (Wolf in Greek), how long will you devour the money of Israel, if you cannot help them in their time of trouble?

Miriam, in her unheard-of chutzpa and ugly disrespect, was comparing Hashem and His commandment of daily sacrifices in the Holy Temple to a hungry wolf that devours sheep, leaving the shepherd with nothing to live on.

When the sages heard this, they slapped a number of penalties on the entire clan of Bilega. Among other sanctions, Bilega was no longer able to use the big iron ring that held an animal steady during slaughter. They were also denied access to a utensil room of their own where they stored and sharpened their knives. And on Shabbat during the change of the priestly guard, they were required to enter and leave the Temple in a dishonorable way.

The Gemara asks, is it proper to fine the entire clan of Bilega for the unfortunate deeds of one of its wayward daughters?

Abaye answers, "Yes!" He gives a seven-word explanation in Aramaic – Shusa deyanuka beshuka o de'avua o d'imai. Namely, what a child speaks in the street, he heard either from his father or from his mother.

Obviously, Miriam the daughter of Bilega while growing up heard her father complain about the "blood and the guts" of the "disgusting" rites of the sacrifices, of which he was "forced" to take part. She must have heard her mother complaining too, about other people having more money than her and about her being required to cover her hair and to dress modestly, as a Jewess and as the wife of a priest. We can be sure that Miriam heard her parents complaining about Judaism while praising the Greeks and their culture. No wonder Miriam couldn't wait to grow up, cast away the yoke of Torah and mitzvoth, and to become a Greek. Not only did she marry a Greek, but a Greek officer who was kin to the royal family.

One still may ask a question: OK, so we acknowledge that Miriam heard her parents slandering Judaism and Jewish rituals. But why must the whole clan be punished just because of Miriam's parents? The Gemara answers that the entire clan of Bilega exhibited disdain for their priestly duties, as they once showed up late for their mishmeret, the beginning of their bi-annual week of service in the Holy Temple.

What servant of a flesh-and-blood king would dare show up late? All the more so in the Holy Temple, when serving the King of Kings…

King Solomon teaches us in Ecclesiastes that everything in creation has its contrast.

The Hasmonian clan of Cohanim (priests) was the total opposite of the Bilega clan. The brothers Yehuda, Shimon, Elazar and Yonatan were fiercely loyal to Hashem and to His commandments, just as their holy father Matattyahu taught them. Known as the Maccabees, the brothers organized a successful rebellion against the Seleucid ruler Antiochus who had influenced the vast majority of Jews, including the high priest Jason, to follow assimilationist Hellenistic ways.

Antiochus made life unbearable for faithful Jews. He outlawed learning Torah, observing Shabbat, circumcision, and ushering in the New Moon, or lunar month. He ensnared the assimilationist Hellenistic Jews by giving them full rights and privileges, among of which were learning in Greek higher educational institutions, participating in Greek sports, and bathing in mixed Greek bathhouses. According to the historian Josephus, over ninety percent of the Jewish population followed the "easy route" of bending to Antiochus and Hellenism. Antiochus did everything to trample, discredit and disparage Judaism and Hashem, culminating in his defiling the Holy Temple in 168 BCE.

This was the last straw for Matattyahu. He sparked the resistance movement by striking a Jew who was preparing to offer sacrifice to the Greek idols. His four sons carried the torch, leading a bold and brilliant guerrilla war against the Syrian Greeks. The war was finally won when their sister Yehudit, under guise of submitting herself to the wicked king, beheaded him with a swift swipe of a sword.

Chanuka, which symbolizes our struggle against the Greeks and Hellenism, is now over. We look forward to Tu B'Shvat. Why? What's the connection between Chanuka and Tu B'Shvat? Tu B'Shvat is a time when we pray for good fruit, not only fruit of the tree but fruit of the womb. We learn that the Jewish families of today will strive to be like the Hasmonean-Maccabee clan and not like the Bilega clan. Parental influence plays a big role in a child's life, and often determines whether the daughter will grow up to be a Miriam Bilega or a Yehudit Maccabee. But if we want good fruit, we as parents must first be good trees.

Unique and thought-provoking I never heard this connection of a bad tree producing bad fruit. In addition, I never heard of the story of Miriam from the Bilega family. Thank you.

I never heard this connection of a bad tree producing bad fruit. In addition, I never heard of the story of Miriam from the Bilega family. Thank you.