Ultimately we will be reunited with all of our loved ones. There will be a great resurrection of souls. Everyone will return to healed and perfected bodies...

My wife's father passed away several weeks ago. He left behind a loving wife, three daughters and nine grandchildren. Of his three daughters, one of them – my wife  – became Torah observant.

I have had a basically positive relationship with my father-in-law since the beginning. He was proud of his Jewish Heritage and attended a conservative synagogue for many years. He made sure that his daughters attended "Hebrew School" and received a Bat Mitzvah.

I am grateful to him for educating my wife in Hebrew because when we got married my wife was able to teach me the Hebrew alphabet slowly at night a few letters at a time.

Despite our differences in religious practice, I always felt a spiritual connection to my father-in-law and felt that it was from him that my wife inherited her great depth of spirituality.

I had the sense that my father-in-law intuitively believed in the true undiluted Torah that Moses received from G-d, but had lived his own way for so long that he simply could not overcome the dissonance between the two.

On one occasion, after flipping through a copy of the Garden of Emuna, he remarked: "This looks like an excellent book  and it's very well written." I suggested that he take it home and read it at his leisure – he refused. When I asked him "why not?" he answered honestly that at 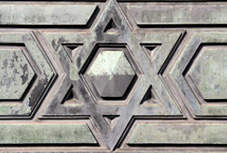 his age the compelling "arguments" of the Garden of Emuna would put him into too much conflict.

Nevertheless, as the years went by, I observed how grandpa Sam was shepping nachas (enjoying pride) from his religious grandchildren. He enjoyed quizzing them about Bible stories that were familiar to him and speaking to them in Yiddish.  He began arranging more Sunday afternoon barbecues with my wife than he ever did before she was religious. Although it was difficult for him to walk, he even came with me to synagogue to pray the afternoon service. Not having ever been to synagogue with my own father, I felt proud to walk in with one of my own relatives.

Grandpa Sam was a self-made man. Without the advantage of a yeshiva education he taught himself how to pray for the congregation and to recite many of the Haftorah's on Shabbos.  He attended numerous classes at the Westbury Hebrew Congregation on Long Island.

Even more amazing, was that in his final years, he set up a regular learning schedule with an Orthodox Rabbi, who came to his house. I recall how stimulated he would become from those learning sessions.

Unfortunately I have not had much contact with grandpa for almost three years. Since making Aliyah, it has been difficult to communicate with him on the phone due to his hearing deficit.

When the end was drawing near, we expressed our final sentiments to each other through another person. That was when he requested that I say Kaddish for him.

Kaddish is a moving prayer for the deceased that sons normally say upon the passing of a parent. In Grandpa Sam's case, he had no sons and being that that I was his only son-in-law who attends shul – he turned to me.

I started saying Kaddish for Grandpa and am finding it to be a very rewarding experience. I somehow feel even more connected to him now than I did when he was alive. I have the sense that every word and syllable that I utter, of this ancient pray, is lifting his soul higher and higher in the supernal realm. I cannot describe how gratifying it is to feel that I can give back to a man who was always so generous with me and my family.

When Rebbe Nachman's daughter expressed her dread of her father's passing, he said: "If I move from this room to than room, and you knock on the door don't you think that I'll still hear you?" That is the nature of communication that I am feeling with Grandpa Sam. By saying Kaddish for him, I feel his presence more directly and less encumbered by superficialities. I feel closer to his daughter, my wife as well since their souls are so connected.

The prophet says that "On that day Hashem will be One and his Name will be One." This means on that day in the future when the our Savior arrives and Hashem's glorious light fills the world he will reveal how everything fits so perfectly together: death and life; good and evil; sickness and health; war and peace.

Ultimately we will be reunited with all of our loved ones. There will be a great resurrection of souls. Everyone will return to healed and perfected bodies. All of humanity will be united with one purpose – to do G-d's Will. Let this live inside of you now. You can always be happy knowing this.

"...Who separates between holy and profane ..."   "Seder Havdalah" with spices - designed with beautiful decorations in shades of cream and brown. Includes the prayers of Havdalah with a special addition of spices.   A good week begins with Havdalah!    Recommended as a gift!

Likutey Moharan V ol. 13 The first authoritative translation of Rebbe Nachman's magnum opus, presented with side-by-side punctuated Hebrew text, full explanatory notes, source references and supplementary information relating to individual lessons. Translated & edited by Moshe Mykoff, annotated by Chaim Kramer, Ozer Bergman, and Rabbi Yisrael Abba Rosenfeld. This is the essence of Rebbe Nachman's teachings that inspires Jews in every generations to open their hearts and minds to Hashem in a way that no other book can! Now is your chance to connect with the ultimate and unparalled teachings of Rebbe Nachman's ageless wisdom! Hardcover, 467 pages

New!   The English edition of the Daat Mikra Bible   Big format, hardcover, 336, fully illustrated with maps and graphics   A wonderful gift for both the learned and the beginner!

New at the Breslev Israel store!   A pretty magnet for your fridge and board!   This plastic, protruding magnet of Jerusalem features a menorah, the windmill and the kotel. 12x6 c"m.   Picture for demonstrative purposes only!   Cute gift item!