Are not the limitations of space and location irrelevant to Hashem? What difference is there between praying at the Kotel or praying at a Los Vegas casino? 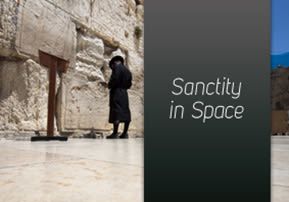 "Abraham rose early in the morning, to the place where he had [previously] stood before God." (Gen. 19:27)

What does it mean that Abraham "stood before God"? The Talmud interpreted this phrase to refer to prayer. (The central prayer is called the Amidah, meaning 'standing', since it is recited while standing.)

A Set Place for Prayer

From the fact that Abraham returned to the place where he had prayed in the past, the Sages deduced that Abraham had designated a particular spot for prayer.

"Rabbi Helbo said: Anyone who has a set location for his prayers will be assisted by the God of Abraham. And when he dies, they will say about him, 'What a pious individual! What a humble person! He was a disciple of our forefather Abraham.'" (Berachot6b)

In what way is a person who sets aside a place for prayer a humble individual? What makes him a disciple of Abraham? Why is it so praiseworthy to always pray in the same location?

When examined by cold logic, however, our sense of holiness in space raises questions. Does not God's glory fill the entire universe? Are not the limitations of space and location irrelevant to God? Why should it matter if I pray to him in the synagogue — or in the bathhouse? What difference is there to God between the inner sanctum of the holy Temple and a Los Vegas casino?

Rav Kook explained that a fundamental truth is at work here: whatever contributes to our ethical and spiritual improvement merits divine providence. Our moral perfection is dependent not only on the intellect, but on the refinement of all of our faculties, including our powers of imagination. Anything that elevates our emotions and imagination, directing them towards good deeds and refined character traits, merits divine providence.

A set location for prayer is a powerful mechanism for uplifting the imagination. Sanctity of place greatly enhances our sense of holiness. Because of its importance in developing this aspect of human nature, there is divine providence to help us succeed in this area.

What makes this conduct humble?

The essence of religious humility is preventing the intellect from belittling matters of spiritual value, even though logically they appear to be baseless. We live not by the intellect alone. Good deeds are the ultimate measure of true living, and our actions are greatly influenced by our imagination and feelings.

Abraham exemplified this form of intellectual modesty. He arrived at belief in the Creator through his powers of logic and reasoning (see Maimonides, Mishneh Torah, Laws of Idolatry 1:9). But when he was tested in the Akeidah, the Binding of Isaac, Abraham relied solely on his faith in God. He chose to disregard all arguments of reason and logic. Anyone who follows in Abraham's footsteps, and sets aside a special location for prayer, is elevating his imaginative and emotive powers. He is a disciple of Abraham, emulating his traits of humility and piety.


* * *
Rabbi Chanan Morrison of Mitzpeh Yericho runs http://ravkookTorah.org, a website dedicated to presenting the Torah commentary of Rabbi Avraham Yitzchak HaCohen Kook, first Chief Rabbi of Eretz Yisrael, to the English-speaking community. He is also the author of Gold from the Land of Israel (Urim Publications, 2006). 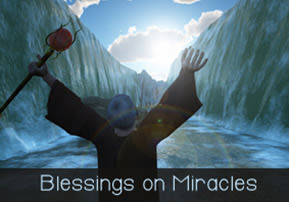 A blessing over a miracle, as our sages teach us, needs to include recognition of the positive effects of its accompanying details...

On that Day – Michael Farkash and the Nafka Mina Band

Singer Michael Farkash with the Nafka Mina band in a stupendous performance of BaYom HaHu - On That Day. 12 songs.

New at the Breslev Israel store!   A blue denim kippah!   A pretty and comfortable kippah made out of 100% synthetic fabric in blue denim. 19 c"m.   Special price! Don't miss out!

Praying with Joy 2 "Praying with Joy 2" will help inspire and enhance your daily prayers! Every chapter comprises seven short sections, one for each day of the week, so the reader will be able to internalize and retain the concepts presented. The chapters explore the tefillos through stories, halachos, and related mussar-concepts, allowing us to penetrate beyond the surface level of the words we are saying and to experience the depth of conversing with Hashem. By Rabbi Daniel Yaakov Travis