Do you want successful and emotionally healthy children? Do you want closeness with your spouse and a tranquil home? Roll up your sleeves and read Rabbi Arush's wise advise...

Translated from Rabbi Arush’s feature article in the weekly Chut shel Chessed newsletter. The articles focus on his main message: “Loving others as yourself”.

The Wisdom of Centuries

A legend is told about three brothers who worked for years for Shlomo Hamelech. When they went home, Shlomo offered them the choice between a considerable sum of money and three words of wisdom. Two of the brothers took money, and the third chose wisdom. He received from Shlomo three wonderful pieces of advice that saved his life, and, in the end, his brothers’ money came to him as well.

In life, there are pieces of advice that are priceless. Wise sayings from our forefathers and the wise men of old, and wise words from the elderly, both male and female, that have come down through the ages. It is forbidden to disparage them, as it says, “Though your mother may be old, do not scorn her.”

There is a wise and amazing saying that I heard in the name of an older woman, who heard it from her mother, and her mother from her mother: “A lazy man works double.” If you think you’ll save time and effort by being lazy, you should know that you are causing yourself double the amount of effort.

This is so true in so many areas in life, but even more so when it comes to improving your character. If you don’t want to work on yourself and your traits because of laziness and your unwillingness to make an effort, you should know that you are going to cause yourself to suffer and exert yourself many times more.

This is especially noticeable when it comes to shalom bayit (peace in the home). In many cases, the main reason for divorce is that the couple doesn’t want to work. The husband and the wife are not willing to exert themselves. They think they will rid themselves of the problem by getting divorced, but they don’t understand that divorce is not a solution to any problem, but, rather, the beginning of a much bigger problem. And all the work they didn’t want to do in their first marriage they will be forced to do, whether they like it or not, in their second or third marriages.

Make no mistake; do not give in to temptation: happiness doesn’t come of itself; it comes as a result of work – serious, consistent, and thorough work. No corner cutting. If you try to cut corners, who will pay in the end? Who will have to work twice as hard, at least? The spouses, the families, the children, the close environment, and many times also the following spouses and the children’s spouses.

A Skinflint Pays Double in the End

Here’s a simple and common example: It is very common that problems in a relationship are the result of the husband’s tight-fistedness. The wife wants a vacation, and the husband thinks he is the Secretary of Treasury and argues with her about budgeting. True, one ought to be calculated and responsible in life. But our Sages promise that in the merit of honoring one’s wife, one will be blessed. Everyone knows that one may go beyond the budget sometimes for a good reason. Your wife and her happiness are a good enough reason, and in the end your own happiness depends on it. And therefore, give generously and with a happy heart, and don’t just give her and then complain during the entire vacation about the spilled milk.

But many times, the husband tries to save a thousand shekels here, and two thousand shekels there, and is reluctant to allow his wife any expenditure – and with time, the wife becomes resentful and the atmosphere in the house becomes murky, to the point of divorce, may it not happen to us.

And then what happens? All the money you didn’t spend on little treats that would have cheered her up and brought light and happiness and the Shechinah (Divine Presence) into the home – both of you are spending liberally on lawyers, alimony, rent for two apartments, and very expensive psychotherapy sessions for yourselves and for the children… If only the damage would be only financial! But everyone well understands what emotional distress this all causes, and everyone knows that the damage to the children is irreversible.

This is just one small, simple demonstration of a lazy person who ends up working doubly hard, and of a skinflint who pays seven times over.

The Torah tells us about a person who gets married, and then hates his wife. Hatred is a spark that starts a dangerous process. Because he hates her, he libels her. He shames a Jewish woman publicly and causes a feud between two families in one town. This might tear the whole city apart into two warring camps. The Torah says that he should be brought to the city gates and punished.

Rashi says that if he hates her, he will end up libeling her. If so, one should ask: Love and hatred are feelings, so one would think that they cannot be controlled, and therefore this entire process that ends with punishment and suffering is not under human control. What, then, does the Torah want from us?

But this is exactly what the Torah is coming to teach. Everything is dependent on work – including your love for your wife. Love and hatred are in your own hands. You have a mitzvah to love every Jew, and if the Torah commands you to do so, that means that you have the ability to do it. And it goes without saying that you should love your wife as well – in other words, to think, speak, and act in ways that will arouse the love, that will connect the two of you, that will cause you two to be like one person, united.

What will you claim? That it’s hard, that it’s an effort? That you don’t have the time or the energy?

The answer is that you have no choice. If you don’t invest the time now, you will invest much more time later. And if you don’t make a small effort now, you will be needing efforts beyond your abilities later.

Every family life system is a constant effort to strengthen the connection and the love, long-term. In this effort, you are not doing anyone else a favor, because you are the main beneficiary. And if you refuse to exert yourself, you are the one who will lose big-time.

The Torah says that lack of exertion causes suffering. The person may not understand where this suffering is coming from, but if the Torah says, “and will punish him”, that means the suffering will come. When there were courts that could do this, it would come from the court. And in these days, “everyone is Your servant” – all the creatures in the world become the agents of the Heavenly Court in punishing a person.

But when a person focuses on the work, it is not so hard. It is not so much effort. A short telephone call to your wife, a few nice words to her, or a little note, a treat, every day – will save you long hours of fighting and shouting, of a murky atmosphere, and of suffering for the whole family.

This is true for thoughts as well: Think endlessly of all the good things she does for you. Appreciate, respect, love, and feel committed to her.

And, of course, it is very important to pray, because after all the efforts one needs a great amount of siyata dishmaya (help from Heaven) so that all the actions you are doing will indeed have an effect and will indeed make your wife happy and bring you two close. This is the perfection of serving Hashem: giving and acts of kindness together with emuna (faith) and tefilla (prayer) bring a person to true ahavat Yisrael and to the presence of the Shechina in the home, and the children who grow up in this home will be successful and blessed and, mainly, emotionally healthy.

What wouldn’t we do to have emotionally healthy children? What wouldn’t we be willing to give? Isn’t it worth it to invest a bit in the success of your children, who are your true measure of success? And remember: You are not losing anything and are not investing anything – you are just saving yourself tons of effort and distress and suffering and damage that cannot be repaired with any sum of money.

Dear couples, invest time in talking to each other every day. Even if everything is “okay”, it is not a waste of time. It is your investment in yourselves and in your family. Elul is an acronym for ani ledodi vedodi li (I am for my beloved and my beloved is for me). The main teshuva (repentance) a person must do is regarding interpersonal relationships, and the main interpersonal relationships are those at home. When a person enjoys shalom bayit, all the gates of service of Hashem are open to him, and all the gates of sustenance and abundance are open to him. May we merit doing complete teshuva, a new beginning, and true shalom bayit in all Jewish homes.

Happiness doesn’t come of itself. It comes as a result of work – serious, consistent, and thorough work.

If you are unwilling to work on improving your character traits, know that you will cause YOURSELF to suffer and to exert yourself many times over.

The Iraqi Garden of Peace 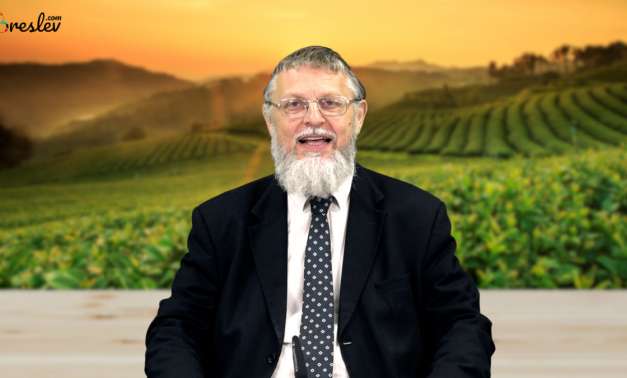 Women's Wisdom: The Garden of Peace for Women - French Women's Wisdom, The Garden of Peace for women, is finally here! Easy to read and choc full of pertinent information, it is designed both for women who are not yet married as well as for women who have already celebrated their golden anniversary. There are times when we search our souls and ask ourselves, "Why aren't we fulfilling our potential? Are we aware of our own tremendous power?" A woman must know her phenomenal intrinsic value and capabilities. Through this understanding, she derives the strength to withstand all of her trials and challenges, and she becomes more effective in building her home. As King Solomon says, "A wise woman builds her home, and the fool, with her own hands destroys it" (Mishlei 14:1). By Rabbi Shalom Arush. French. Softcover, 554 pages.

New at the Breslev Israel store!   A special red bracelet with a silver-colored nickel hamsa in a blue eye design.   A lovely gift item!

Pair of Silver Candlestick Holders in Shape of Star of David

Set of candlestick holders in the shape of the Star of David. 925 electroform silver.