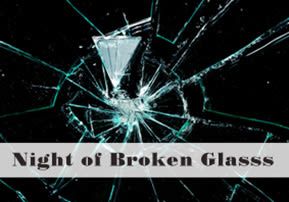 The Night of Broken Glass, whichin German was calledKristallnacht, was an anti-Jewish pogrom in Nazi Germany and Austria on 9 to 10 November 1938. Kristallnacht was triggered by the assassination in Paris of German diplomat Ernst vom Rath by Herschel Grynszpan, a German-born Polish Jew. In a coordinated attack on Jewish people and their property, 91 Jews were murdered and 30,000 were arrested and placed in concentration camps. 267 synagogues were destroyed, and thousands of homes and businesses were 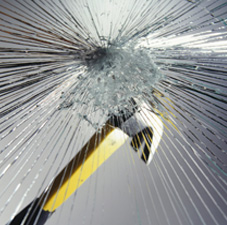 ransacked. This was done by the Brown Shirt Hitler Youth, the Gestapo the SA and the SS. Kristallnacht also served as a pretext and a means for the wholesale confiscation of firearms from German Jews, in order to assure their being left defenseless.

This woke up some Jews to the unfolding dangers, but not enough. So very many chose to remain blind and stayed waiting for the storm to go away. History was to recount as what an immense mistake that choice was.

While the fledgling Nazi party was growing in size and power, the concept of what Jewish life is really about being dried up diluted and all but lost. The Jewish community was crumbling. The Reform movement and the Enlightenment were taking their toll. Tens of thousands of Jews were losing all feeling of being Jewish really is. Theirs was more like a drab colorless lifeless cardboard cutout rather a living vibrant spiritual life. It was devoid of anything to stimulate the heart and soul. When there is nothing to draw interest, nothing to love, to respect; there is nothing to attract loyalty, there is no inner bond.   Along with that since even the most basic level of Jewish soul desires spirituality, if "at home" their lives were devoid of spirituality, they would seek some semblance of it elsewhere.

Together this resulted in myriads of German Jews, leaving Judaism. By the onset of WW 2 there were 10,000 Catholic and Protestant priests and pastors in Germany from Jewish families.

They had sought the spirituality that had been stolen from them by the dried up version of Judaism they had been brought up in.

Even among those who "remained Jewish" many had adopted the attitude and saying of, "Be a Jew at home and a human being outside".

Is there any wonder that God let loose the Angel of Death with an 'open license to kill wholesale'? This process and its horrific outcome was to become one of the most gruesome chapters in human history.

Between the worsening socio-economic situation in Germany with the increasing political radicalism, combined with Divine Providence turning against the Jews of Germany due to the vast number who abandoned Torah life and values, the stage was all set for…

Holocaust, the Greek word for sacrifice. 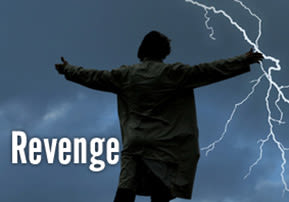 The Jewish youth of Austria make a daring revenge on the Hitler Brownshirt youth who killed a Jewish boy; the respite was ever so short…

4 min
Holocaust Remembrance Day: A Cruise and a Camp

An elegant and spectacular challah cover in blue velvet.   Embroidered in the center is a depiction of the Vilna Gate and the inscription "שבת ויום טוב (Shabbat and Yom Tov)".   Cover size 62 * 52 cm.   Comes in a hard plastic "envelope" for safekeeping. Zipper closure.   Upgrade your Shabbat and holiday table with the perfect challah cover! Also suitable as a special gift!

Enhance your Shabbat or Holiday table with matching salt and pepper shakers. Made of crystal.

He's brilliant, he's talented, he's privileged. But Yanky Kleiner is about to abandon his shining future in the halls of the beis medrash and pursue a career as an architect. His mitzvah observance has become cold and mechanical, and his once-robust faith is tortured by questions and doubts. Now that disturbing evidence has surfaced about his role model and the chassidus he always revered, how long can he keep up his act?   He's misunderstood, he's unwashed, he's penniless. But Lulu, a homeless beggar living on the edges of Jerusalem's neighborhoods, has different goals for his young friend Bugi. He wants to see Bugi gainfully employed and comfortably housed. As he skirts the inner circle Bugi has formed, can he bridge the chasm formed by long-ago wounds?   All I Ask brings us into the dark refuges near Jerusalem's bus station, the life-changing lectures of a watchmaker who knows the secrets of the human spirit, and the battlefield of the human soul.

Magnet – You’re the best! – in Hebrew

Magnet - You're the best! - in Hebrew