If someone had told me a few months ago that not dressing modestly could affect a person’s health and well-being, I’m not sure I would have believed them... 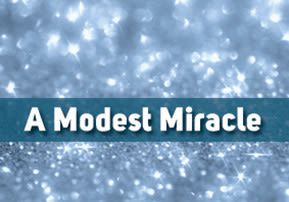 Sometimes, if you don’t experience something for yourself, you simply don’t believe that it’s true. How many of us have heard about other people’s miraculous stories, and found them too hard to swallow? So I’m warning you now, dear reader, you may find this a little hard to believe – but it’s all true.

A few months ago at the end of November, my oldest daughter got hit with a bad case of flu. I took her to the doctor – for the first time in two years – and he told me that it was probably swine flu, and there was nothing to do except wait it out.
I waited two weeks. She was still coughing, still miserable and still very under the weather. The doctor checked her again, and said if it didn’t clear up soon, we’d have to think about antibiotics.
Shortly after that second visit, it cleared up for a week or so – I started saying some tehillim in the meantime – but very soon afterwards, I noticed that the haggard look was back on her face, and she was complaining about aches and pains all over the place.
I was starting to get seriously worried about her. My normally bubbly, bouncy, rosy-cheeked girl was pallid, depressed, coughing, wheezing and miserable. This was all happening back in January. I’ve written elsewhere about how a big part of the problem turned out to be that she was being teased in school. But even when I realised that, and we decided to move school and community as a result, and the teasing let up considerably, there was still not much of a visible improvement in my daughter’s health.
Back to the doctor we went – another two times. The last time, he looked at me quite thoughtfully, and told me that he really didn’t think that there was anything very much wrong, despite how unwell she looked.
I was completely baffled – and worrying terribly. In the meantime, hay fever season started, and my daughter started streaming cold night and day, finding it hard to sleep, and breaking out in allergic reactions. And she was still complaining that her head hurt.
I simply didn’t know what to do. My daughter was languishing, and I knew if I took her back to the doctor he’d probably certify me as having a mental problem. But she wasn’t well. She wasn’t sleeping. She wasn’t happy.
I prayed and prayed and prayed. I said ‘thank you’ for the fact that she was unwell – no improvement. I begged Hashem to heal her and upped my tehillim – no improvement. I was really starting to panic.
Then, I realised that there is no tribulation without prior transgression. Maybe I was doing something wrong to cause her illness? Initially, I thought that perhaps Hashem was trying to teach me to have more emuna, and to trust Him more – areas that I still need a lot of work on.
I did some more hitbodedut around that idea – but nothing was clicking or falling into place. I spent days only a fraction away from complete collapse, feeling that my motherly instinct that something ‘serious’ was wrong with my daughter had to be right after all, because otherwise, after four long months and one planned move, why was I still so scared for her?
That’s when I decided to call my Rav. I don’t call my Rav for everything, or even most things. Normally, I try to work things through in hitbodedut, and it nearly always gives me the clarity I need to know what Hashem is trying to tell me.
But I’d given this situation four months; I’d been to the doctor four times; I’d spent hours and hours and hours praying – and I felt like I simply wasn’t getting anywhere.
I knew that I just couldn’t do it by myself, so I called him, and explained what was going on.
The first thing he asked me was: “How’s her tznius?” 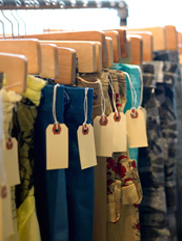 Tznius – modesty?! I was shocked. Then I thought about how she’d been dressing recently, and how in the last few months she’d grown up a lot, physically, and a lot of her clothes were kind of tight or didn’t cover everything they should do.
Gosh. Her tznius was actually pretty lousy! I was even more shocked. I’ve been making more and more of an effort to dress modestly, but I simply hadn’t realised that my daughter increasingly wasn’t.
“When did she turn nine?” my Rav wanted to know. I thought about it; then realised that the day of her ninth birthday was probably the worst day of my life. It was the day I’d got so anxious about her health I spent the whole day in bed, throwing up.
Wow.
I’d always thought that the tznius rules only really kicked in for girls at age twelve, but that’s not the case. As my Rav explained to me, once a girl turns nine, they have to really up the ante on their tznius, as many girls of that age are already developing physically – like my daughter. Hashem had been trying to tell me that there was  something seriously wrong, spiritually. But I didn’t have good enough spiritual antennae to pick up the message. It took my Rav to tell me what was going on.
“She’s already better,” he told me. “Make sure she starts to really dress modestly, including socks, and you’ll see she’ll pick up in no time.”
It’s strange, but I just knew in my neshama that my Rav was right. My daughter was going to be ok, Bezrat Hashem.
That afternoon, I bought loads of modest tops that were long enough to cover everything they should, and cleaned out any clothes that had got too small or weren’t suitable. The next day, I shlepped my whining, sick, tired daughter all over the place, trying to find a couple of suitable long skirts and socks.
She still looked terrible, but my husband kept reassuring me that we had already turned the corner. “It’s just a test now, to see if you are really going to have faith in what the Rav told you,” he said.
He was bang on the money.
Within a week, she had perked up considerably. At this point, now more than two weeks’ later, she is a different child. She’s started dancing again, laughing again, eating again.
She’s still not 100% – I don’t think she will be until we’ve both properly internalised that we simply can’t let the tznius slide. I am going to need a lot of siyata dishemaya to walk the fine line between encouraging my daughter to dress like a princess, and not just stuffing tznius down her throat, after really not being so strict for so long.
We’ve had a few ‘issues’, but for the most part, she has responded so wonderfully, and I’m asking Hashem to help me help her only improve from here.
And in the meantime, so many things are now making sense. Like why she was teased so much at school about her appearance; like why her ninth birthday was so memorably terrible; like why Hashem made it so obvious that we simply couldn’t continue living in the same place or continue going to the same school.
He got my daughter out of a potentially devastating situation just in the nick of time. Even in her ‘less-than-tznius’ mode, she was still more tznius than most of her classmates. And it would only have got harder and harder.
If someone had told me a few months ago that not dressing modestly could affect a person’s health and well-being, I’m not sure I would have believed them. But after everything I’ve been through the last few weeks, I really am seeing the clear link between dressing modestly, and having Hashem’s blessings in my home.
It’s taken a modest miracle to get to this point. Now, I’m asking Hashem to continue doing His kindnesses, and to help my girls be in an environment where being modest isn’t just something they learn in theory, but a real way of life.
Note: In Rabbi Arush's community, basic standards of tzniut like long skirts and sleeves kick in already at age 3, becoming more strict by age 7.

Because maybe those other girls would not get the message in that way, the way this woman got the message? Hashem knows what works for who and the right time...

Hashem will send messages to the parent through their children at times. In this case, God did so not only for the benefit of the parent, but also the child who does not want such serious sins as lack of modesty from such a tender age.

God sends messages according to the level of a person. Clearly, He expected Rivka to know better and pay more attention according to her level. The Torah is a guide to life It is in our best interest to keep it -a sick soul is a sick body even if we cannot see it.

Many people have the mistaken opinion that socks are a stringency. I know this very well, since that is what I was taught way back when!

However, this is not true and all the poskim are very strict about the absolute halachic requirement for socks that are not opaque (should not be able to see veins or hair) and not skin colored (it must be clear that the woman is wearing socks/stockings).

The Posek for our yeshiva insists that girls must have their legs fully covered already by age 3!

A reader asks, “Are Kameas allowed?” Are they some sort of magic or Avodah Zarah? Where do they fit into Breslev tradition? How can you properly use them?

5 min
All in The Name

3 min
Bring Mussar Into Your Life

Travels with the Maggidim – Winning the War

This is the fourth book in the series "Travels with the Maggidim". Four wonderful stories with important messages about how to strengthen our avodat Hashem by helping us overcome the twisted, sneaky ways of the yetzer hara.