The ‘Sliver Moon’ in the Cherokee Council House shows that the Cherokee nation keeps months in sacred manner of Hebrews, yet more evidence of their Israelite roots… 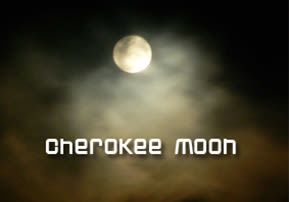 Sabbath reminder
The command to sanctify the “sliver moon” each month is so important that a reminder of the date of the “new moon” is announced in the synagogues the Sabbath before it occurs.
Other similarities pertaining to the moon include the mutual Hebrew-Cherokee belief that the Autumn moon commemorating the creation of Adam at the time of “ripe fruits,” begins the civil calendar and that the new moon of Spring begins the priestly calendar. 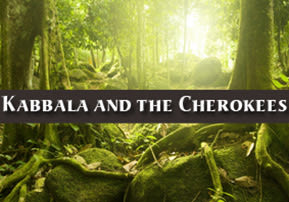 A walk into the Cherokee Council House is a walk into Kabbalah – the arrangement of the Council seats, seven feathers and orbs all allude to mystical paths and Hebrew roots.

Kabbala and the Cherokees

5 min
Are we Really Shortchanged?

A unique tallit and tefillin set, imitation leather in dark gray and white with embroidery!   Two spectacular dark gray and white bags. On the front of the bags, down the middle, is a band of imitation leather. On each bag is embroidered in light shades "Tallit" or "Tefillin" in Hebrew.   The bags come in a hard nylon case with a zipper for safekeeping.   Set size: 36 * 29 cm   Highly recommended as a gift set!

This siddur is the first new Orthodox Hebrew-English siddur in a generation. The siddur embodies Koren’s impeccable textual accuracy and intuitive graphic design, and offers an enlightening translation, introduction and commentary by Rabbi Jonathan Sacks, one of the world’s leading Jewish thinkers. It is the only Orthodox siddur that includes prayers for the state of Israel, its soldiers and national holidays, and a halachic guide for visitors; prayers following childbirth and upon the birth of a daughter; a modern translation and transliteration, and citations of modern authorities. Published in cooperation with the Orthodox Union. Leader's size, Ashkenaz, hardcover, Hebrew-English. Koren Publishers, 1296 pages.

New at the Breslev Israel store!   A beautiful Kudu shofar in a beautiful, hand-made gold design and high quality finish. Color and size vary from shofar to shofar (between 60-69 c"m) since each shofar is a unique and individual creation.   Limited supply - order Now!

The First Year of Marriage

The First Year of Marriage: Enhancing the Success of Your Marriage Right from the Start - and Even Before It Begins Rabbi Dr. Abraham J. Twerski's powerful insights and skilled practicality once again come to the fore as he speaks to couples embarking on their first year of marriage. How strange it is, he remarks in his introduction, that countless hours are spent making arrangements for the wedding and so little time is spent preparing for the marriage itself! Most young couples, the author boldly asserts, will not believe they need a book like this as they contemplate their upcoming perfect marriage. Rabbi Twerski explains at the outset that every couple needs to understand the mechanisms of adjustment and change; that they must be aware of the differences in their upbringings and expectations. These life experiences are neither "right" nor "wrong," but require honest discussion as the marriage takes root and differences surface. Rabbi Twerski's stunning portrayals of everyday situations will make you say, "That's us! How did he know?" He knows because he has counseled thousands of people and he knows the value of advance awareness and solid advice. This is a book that should be read -- and absorbed! -- by engaged couples, newly married couples, and their parents. Taking it to heart will prevent needless aggravation and pave the way to the loving, nurturing, and fulfilling marriage every couple deserves. Rabbi Twerski is the perfect guide through the first crucial stages of marriage to a lifetime of happiness! By Rabbi Dr. Abraham J. Twerski. Artscroll, hardcover, 210 pages

This beautiful and inspiring prayer is part of the Shabbat and Holiday services, but its regular repitition is also a tremendous segulah for yeshuot! It is also customary for pregnant women to say this prayer daily, and after birth. Hebrew. Nusach Sefard (Chassidic)