The Gemara’s stories are not children’s tales – they’re the real deal and laws to live by. Nachum Ish Gamzu and Rebbe Akiva show us what life is all about. 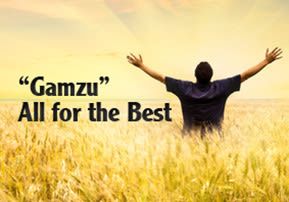 No Such Thing as Bad, Part 3

The Gemara in tractate Berachot 60b tells the story of Rebbe Akiva, would always say, “Kal d’avid Rachmana letav avid — Everthing Hashem does is for the good.” Rabbi Akiva used to travel with a candle, a rooster, and a donkey: the candle so he could study Torah at night, the rooster was his alarm clock to wake him up to study Torah, and the donkey was his GMC van. Rabbi Akiva stopped at a town. He tried to check in to an inn but there were no vacancies avail­able.
Rabbi Akiva went from house to house but nobody would let him in. So what did he do? He thanked Hashem, walked up into the neighboring wooded hills and set up camp. All of a sudden, a strong wind kicks up and extinguishes the candle. Now, he can’t study Torah anymore but he still thanks Hashem, knowing that 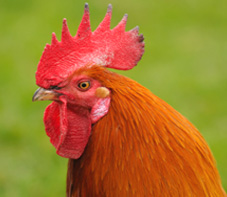 this is for the best. A few moments later, a fero­cious lion emerges from behind his tent and kills his donkey. Imagine that your new $70,000 van is totaled – that’s just what the loss of his donkey meant to Rebbe Akiva. He now has no means of transportation and no way to transport all his possessions. What does he do? He thanks Hashem knowing that this too is for the best. He’s now left with his rooster. A ravenous cat appears and devours it. Rabbi Akiva simply reacts by saying in perfect calm, “Everything Hashem does is for the best.”
At the time, Rebbe Akiva believed that Hashem was doing everything for the best. But the next morning, he understood how everything was for the best. When he woke up in the morning, he found out that a band of robbers had attacked the town during the night, mercilessly killing the people and stealing their money. The robbers escaped into the forest. If they would had seen the candle, or heard the crowing of the rooster and the neighing of the donkey, Rabbi Akiva would have met the same fate as the folks in town. Hashem saved his life by extinguishing his candle and killing his animals. The seemingly bad was all for the best, showing us that it was never bad at all, only good! Trading a rooster for your life is a good deal any day of the week.
When Rebbe Akiva was experiencing setbacks, he believed that Hashem was doing everything for the best. Remember that Rebbe Akiva’s rebbe was Nachum Ish Gamzu. Rebbe Akiva learned emuna from Nachum Ish Gamzu. When Nachum Ish Gamzu would undergo body and mind-breaking tests of faith, he knew that everything was for the best. That’s how he got his name, for he used to say, gam zu letova, this is also for the best.
The Gemara in tractate Taanit 21a tells us that Nachum Ish Gamzu was sent as the representative of the entire Jewish people in the Land of Israel to the Roman Emperor, and he carried a treasure chest full of precious gemstones to give the Emperor in their behalf. During the night at an inn, he stowed the treasure chest in a secret hiding place. While he slept, the innkeeper switched the chest with a different one.
The next morning, when Nachum Ish Gamzu was already on his way to Rome, he discovered that there were no longer diamonds and rubies inside. Instead, the entire strong box was filled with sand. Nachum Ish Gamzu said, “Gam zu letovah — This too is for the best,” and continued on his way in complete confidence, because his emuna was so strong, internalized in every one of his extremities, that he knew that Hashem was doing something for the best.
Nachum Ish Gamzu entered the palace in Rome and said to the Emperor, “Caesar, because of our great respect for you, my people are presenting this gift to you.” The Emperor opened the chest and saw the sand. He thought, well, there must be something else beneath it. He sifted through the sand. He dug his hand into one side of the chest, then the other. But all he found was sand. He was infuriated. “For mocking me,” Caesar said, “I will have you put to death.” Nachum Ish Gamzu merely shrugged his shoulders and said matter-of-factly, “Gam zu letovah – this too is for the best.”
Suddenly, one of Caesar’s advisors walked it (who the Talmud tells us it was Elijah the Prophet disguised as a Roman senator). “What are you talk­ing about, Your Excellency?” he declared. “Do you think the Jews are so stupid? Do you think they are so foolish they’d give you simple sand?! This must be the same sand that Abraham their Patriarch used when he fought against the four kings (see Midrash Tanchuma on Breishit, Chapter 14). Abraham single-handedly conquered the most powerful kings of his time. Do you know how he did it? He possessed magic sand. He threw it into the air and the sand turned into deadly spears and arrows.”
“Really?” responded the Emperor. “Let’s try it out.”
Caesar’s army was fighting a fierce battle against revolutionaries in the neighboring province. He sent this chest of “magic sand” to the front lines with his soldiers and they began to throw handfuls of sand toward the enemy. Lo and behold, the sand became a devastating barrage of arrows that routed the enemy. In a day or two, the Roman army was able to reconquer the entire province. The Emperor thanked Nachum Ish Gamzu, saying, “Because you did this for me, I’m going to reward you with a chest of gold and silver. Take it back to your people and tell them that if they should ever need anything, they should come to me. I’ll be happy to oblige them.”
On his way back home, Nachum Ish Gamzu stopped at the same inn. The proprietor asked him, “What gift did you bring the Emperor that he showed you such honor?”
Nachum Ish Gamzu replied, “I brought a strong-box with magic sand to the Emperor – he loved it!”
The innkeeper heard this and said to himself, “Wow! That’s the sand in my backyard!” So, he filled up an entire wagon full of sand. He brought it to the Emperor and said, “You know that sand Nachum Ish Gamzu brought you last week? This is the same type.” The Emperor was overjoyed and imme­diately sent the wagon of sand to the troops. When the “magic sand” turned out to be a sham, the infuriated Emperor sent the crooked innkeeper to the gallows…
The Gemara’s stories are not children’s tales – they’re the real deal and laws to live by. 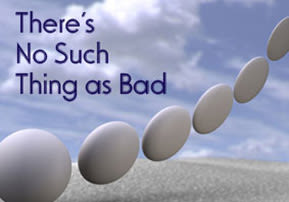 Recently, Rav Shalom Arush has been speaking almost exclusively about gratitude to Hashem. The reason is that nothing in the world mitigates stern judgments like gratitude…

There’s No Such Thing as Bad

Nothing that happens in the Schneider household is normal! What happens when......One of Yoni's pigeons escapes?...Bentzy and Tuli enter the Churvah Shul building site?...Uncle Yaakov, Yoni, and Motty, get stuck in the middle of the desert, and it begins to rain?...Etty falls off a kayak right into the Jordan River?...Three foreign photographers think that they are being followed? Come share in the latest dramatic adventures of the Schneiders' 21 children!

“If I Forget You Jerusalem” Necklace

New at the Breslev Israel store!   A lovely gift item for you and your loved ones.   A beautiful, rhodium-made necklace engraved with "If I Forget You Jerusalem" in Hebrew. A hamsa with a blue stone sits at the pendant's center.   Treat yourself and your loved ones! Now at a great price!

Necklace with Designs of Eretz Yisrael and Star of David

A unique and spectacular necklace with pendants of Eretz Israel and Star of David. The necklace and pendant are made of rhodium silver.   Also suitable as a special and original gift for your loved ones!

Do You Know Hilchos Shabbos?

Do You Know Hilchos Shabbos? It is the halachos of Shabbos that create the framework for our Shabbos activities. Clearly, we need to know the halachos to observe Shabbos properly and in order to gain thew most from it. There are volumes of excellent sefarim already available to study all the laws of Shabbos from beginning to end...but how many of us have time for that? This sefer is designed for people with more limited time who want to learn or review Shabbos laws in a stimulating way. There are nearly five hundred questions arranged in an interesting question & answer format  to stimulate and educate with a touch of humor and a friendly style, with answers that can encourage  our children on how to interact with family members...lessons they can later remember warmly to infuse their own Jewish homes with simcha on Shabbos.  A  treasure house of Shabbos knowledge!  Make it a part of your library today!! Compiled by Rabbi Michoel Fletcher