Descending From the Throne

Trying and failing helped us to focus our attention. It made us want this baby so badly we couldn’t take any of it for granted, as if Hashem was asking me how badly I wanted it. 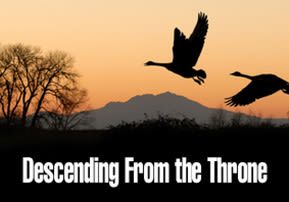 When my husband and I decided to try to have a baby we were living on 110 acres of farm land in North Carolina. There were no young couple with kids on our road pushing carriages, showing us what life might be like for us, but a mile down the road there was a rustic, brown clapboard cabin that sat behind a sizable and idyllic duck pond. The pond was positioned just right for optimal viewing both from the road and from the bay window in the front of the cabin. Over the years the road passing in front of the house grew busier and busier, making life a little stressful for the myriad ducks, swans, geese, and even peacocks who shared the property. Sometimes it felt like we all had to leave our driveways going 60 mph. 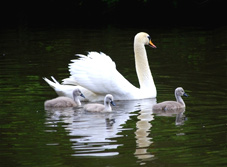 One spring we were delighted to see that the swan couple, who were the snowy showboats of the pond, welcomed two fluffy, gray signets into their family. We were actually ecstatic. Signets are dreamy because they are babies, yet they are large. They are giant fuzzy chicks with black beaks and a shape that hints to their future elegance- many incongruent features that coexist such that we found them irresistible. We always slowed way down to catch a glimpse and make sure they remained unstressed by cars racing past.
One morning the signets noticed that there was a large puddle across the street from their pond, so they meandered across the dangerous street, oblivious to the cars zooming by, and began flitting about in the puddle having a grand old time. I noticed them, gasped, and slowed way down because they were only a few feet from the road. One of the parent swans was positioned between the babies and the road, standing as strong and tall as it could, nervously fluttering and spreading its wings almost daring anyone to speed past and frighten its chicks. It was moving to see this swan so uncomfortable and nervous, allowing the chicks to practice their swimming skills.
The signets grew from fat babies into bigger and bolder kids. Their color remained grey, but their feather smoothed down. Their attitudes kicked in and there was no stopping them from exploring the property, including the road, the ditch next to the road, puddles on the road, shrubs near the road. And always near by were one or both of the adult swans who knew the danger, but never interfered with their babies’ explorations. They always put themselves between the signets and the danger and stood patiently keeping watch. They never squawked and shooed their young to safer ground, sometimes literally standing a mere foot or two from cars that could have struck them, ruffling their regal white feathers as they sped past, and almost blowing them over in their wake. If they needed to, they would stand in one spot for hours leaning at an impossible angle on the side of a ditch while the babies pecked and explored. We all felt for them- it looked so beleaguering.
As we tried and tried to get pregnant, we naturally thought more and more about what it means to be a parent. I don’t know why Hashem writes our stories the way He does, but I know that trying and trying and failing and failing taught us and focused our attention. It made us want this baby so badly we couldn’t take any of it for granted. It felt to me like Hashem was asking me over and over how badly I wanted it. He was repeating to me using almost everything around me, “Doing My job is difficult. Are you paying attention? Do you see what it means to be a mother?”
As my husband and I were driving into town one evening I said, “Have you noticed how those swans stand on the sides of that ditch for hours and hours, totally uncomfortable, waiting while their babies play? That’s what we’ll need to do. Our plans won’t matter any more.” There’s no shooing the chicks back to the pond. We have to stand by, protect them as much as we can, put aside our schemes and comfort, and let them explore and play and be their oblivious baby selves. The big egos need to go away. You become a guard, a janitor, a chef, a party planner, a nurse, a chauffer, a banker, and many other things. Looking regal and pulled together- feh. You make them look regal and pulled together, then you. You become the agent of change for them. You try to make things happen for them. And if you need to stand on the side of a ditch, frightened and uncomfortable, so they can learn what they need to learn, you turn off your mind and your ego and do it.
That is the generosity of parenting that makes us love our parents so much, even when we are too young to really grasp what our parents are- hopefully- doing for us. The swans were the king and queen of the place. But the king and queen knew without anyone telling them that if they needed to get their robes dirty, come down off the throne, and stand in murky ditch water, then that is what they would do. It aged them, it endangered them, it took the attention off of them but it gave them and the world two stunning little signets.
The day after our wedding, after the guests had gone home and we were getting our passports ready for our honeymoon I was moved to tears by the whole thing. A friend said, “You will be overwhelmed by generosity aimed at you. You just have to receive it and be grateful. You can say thank you over and over, but it’s all so beautiful it feels like you can never say thank you enough.” When we become parents, it is our chance to repay our parents here and our Father in Heaven. We repay them by doing our best, by stepping down off our thrones and helping someone else have their shot at a wonderful life. The reward is in paying it all forward. 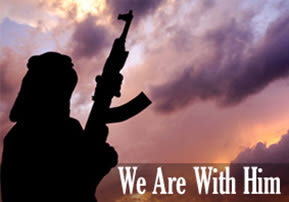 In as much as we are committed to Hashem, in as much as we cleave to Him, we are put aside as His. And if this is the case, Hashem will listen when we call.

We Are With Him

NEW! Original! Special! An oil on canvas print by artist Yehoshua Weissman. An oil on canvas painting of the Woman of Valor hymn, done in brilliant shades of purple, pink and yellow. The hymn is written in indigo-colored letters and adorned on the right by a beautiful dark pink rose. Size: 35x25 c"m. Ready to hang.  Order today! A beautiful gift item! Great price!

Nurtured by parents who imbibed deeply from the Torah wellsprings of European Jewry ― such as Rav Baruch Ber Leibowitz, Rav Eliezer Yehudah Finkel, and Sara Schenirer ― young Shimshon grew into a world-renowned speaker, educating and influencing audiences across the Jewish spectrum. He manifested spiritual powers that seemed to transcend the forces of nature and human capacity. His heart burned with holy sparks of fervor, and those sparks grew into a mighty torch that illuminates our world with Torah, yiras Shamayim, and kedushah until this very day   Like a blazing sun, the book traces Rav Pincus’s path from the American spiritual desert of the early 20th century to Torah greatness. Based on the bestselling Hebrew biography Hashemesh Bigvuraso, it is a stirring collection of firsthand facts, hanhagos, and stories from distinguished rabbanim, talmidei chachamim, family members and talmidim who ensured that this sefer―like its Hebrew original―bears the eternal stamp of emes.   Hardbound Pages: 527

Exodus Glass Matzah Plate A beautiful, decorative glass matzah plate painted in Exodus-themed designs. This plate makes for an original and unigue Passover gift item and is a stunning and spectacular addition to any seder table! Size: 28 c"m. Order Now!