The Power of Shabbat Songs

Songs sung at the Shabbat table gives us the power to stir the deepest spiritual emotions in your soul, purifying your thoughts, words and actions! 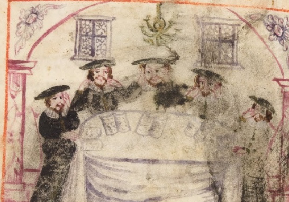 “He planted an 'eshel' in Beersheba, and there he proclaimed the name of Hashem, God of the Universe.” (Bereishit 21:33)

What reconnected the soldier?

The Rebbe, R’ Yisrael of Modzitz, author of the Dvrei Yisroel, was famous for his ability to compose beautiful niggunim – zemirot and songs that stirred the deepest emotions of the soul.

The Rebbe and his chassidim lived near a large Polish garrison that housed battalions of soldiers as well as the military’s marching band, whose field commander was Jewish. However, you would never know; he had long forgotten his Jewish roots and had abandoned his Jewish identity.

One Saturday, the field commander was walking in the town near dusk when he heard what sounded like a large crowd of people who were singing. The people were coming from the Rebbe’s shul. He stood outside the shul’s windows, listening intently. He was captivated by the beautiful melodies being sung by the Rebbe and his chassidim during 'Shalesh Sheudot'.

Mesmerized by the songs, the field commander, almost in a trance, slowly entered the shul to quench his musical thirst. The Rebbe continued to sing the zemirot and, as the soldier listened, a deep desire to become closer to his Creator began to bubble up from the depths of his heart.

When the singing concluded and the Rebbe ended Shabbat with Havdalah, the soldier went into the Rebbe’s private office. Sitting before the Tzadik the soldier erupted into uncontrollable sobbing, tears rolling down his face, as he explained to the Rebbe: “My parents were both Jewish from central Russia. But my mother raised us without any connection to our Jewishness. I have long forgotten my Jewish heritage. It meant nothing to me until I heard the Rebbe singing. Something was awakened inside me; I felt my Jewish soul for the first time in my life. The more I listened to the Rebbe singing, the more this emotion swelled inside me; I felt an insatiable desire to live a Jewish lifestyle, connecting to my heritage and worshiping our Heavenly Father. How do I begin?”

The Rebbe consoled the weeping soldier with the sweetness of a father telling him that he needs to try and do whatever he could to observe Shabbat and to avoid its desecration at all costs. The soldier listened to the Rebbe and slowly began his journey back to Yiddishkeit. Through the Rebbe’s encouragement and guidance, this soldier began observing more and more of the Torah, performing more mitzvot. He would often spend time in the Rebbe’s home, learning the melodies of Modzitz. He would even blend some of the melodies into the music played by the Polish military’s marching band.

The following Pesach, the soldier decided to diligently observe all the Pesach laws, including the removal and avoidance of even being seen with a speck of chametz. He therefore asked all the soldiers in his barrack that they should only eat bread outside of the barrack.

One soldier from his barrack stood outside eating a sandwich when the general walked by and inquired as to why the solider was standing outside and eating. The soldier explained that the field commander had become a religious Jew and that this was his wish.

This general hated all forms of religious practices and demanded that the field commander leave the garrison in a few weeks’ time and find a post elsewhere.

The Jew pleaded with the general and told him the entire story; how he was born to an irreligious family and how the Rebbe’s melodies had awakened this desire deep in his heart to reconnect to his heritage and to Hashem.

The general simply could not understand how a simple song could be the catalyst for such a drastic change in someone’s life; that a simple song can transform someone so drastically. So, he went to the shul’s windows on dusk on Shabbat day to hear from himself. He stood outside the windows and listened to the Rebbe and his chassidim.

When he returned to the barracks Saturday night, he summoned the Jewish field commander and told him: “I went to listen to the Rebbe and these melodies that they sing on Saturday. Now I understand. There is something special in those melodies. I can see and feel their power. I myself felt how they can arouse such a faith in the Creator and a love for Him, not only for Jews, but non-Jews alike. Stay in the garrison and feel free to observe all of your religious laws perfectly without obstruction."

The power of Shabbat zemirot

The same is well known about my holy ancestor, Rabbi Yitzhak Isaac from Kalev zt” l, that he was able to bring thousands of Jews back to Yiddishkeit through the power of zemirot, especially on Shabbat when the atmosphere is filled with holiness during the tefilot and meals.

The power of zemirot and nigunim is such a powerful tool for every yid; it can stir the deepest spiritual emotions in your soul, purifying your thoughts, words and actions allowing you to connect to Hashem in a very special, deep and meaningful way.

Therefore, the sages and the tzaddikim composed specific zemirot for Shabbat and Yom Tov.

Avraham and Returning Through Song

This is possibly what the Torah is alluding to with this pasuk:

He planted an “eshel” in Beersheba, and there he proclaimed the name of Hashem, “God of the Universe”.

How did they connect to Hashem at this “Eshel”?

The word “Beer” means a well. The people who came to this place were able to tap into a deep spiritual well.

How did they connect to this well?

“Sheba” is referring to the seventh day of the week, Shabbat.

Avraham built a place where people could gather on Shabbat and draw from the spiritual wells that are present at the Shabbat meals, by sitting together with Avraham who proclaimed there the name of Hashem, God of the Universe, through singing Zemirot Shabbat.

As the Torah continues, “Avraham returned to his young men, and they stood up and went together to Beersheba and Avraham stayed in Beer-Sheba” (Bereishit 22:19)

Avraham was able to “return” – bring back – these young men to Hashem. He was able to inspire them to believe in one God, one Master of the Universe. How was Avraham able to accomplish this? How did he inspire them? With the power of “they went together to Beersheba” – through the power of the deep wells of spirituality that one can experience through zemirot on Shabbat.

When a Yid observes and celebrates Shabbat, with Zemirot Shabbat, he and his family can tap into these deep wells of faith, of spirituality and of blessings. May each yid strive to connect in new and deeper ways to Shabbat and be able to draw from the wells of spiritual and physical blessings. Amen

The Breslev Chassidic movement is famous for its treasury of rich and varied melodies. Music has always held a central part in the Breslev community…
Never miss new articles!

3 min
The Biggest Shabbat of the Year

3 min
My New Job, or Shabbos

How to bring down the blessing of the Creator? How to find those special words that will be heard from Above? The righteous of past generations have made many wonderful prayers.You will find the main ones in this book, including prayer at bedtime and blessings on food (with translation and transliteration). Gift Edition. Hard cover.

A spectacular plastic mezuzah!    Gold-colored plastic mezuzah, spectacular in its beauty. The letter "ש" on the mezuzah. The mezuzah comes in a special storage case that comes with double-sided adhesive.   Length: 10 cm.    The beauty begins right at the entrance to the house! The mezuzah that will give a luxurious look is already in the front door!

A tallit for children is made of very comfortable and high quality polyester fabric. Machine washable. Knots are tied according to Rabbi Landau's stringent guidelines. Size - 4 Dimensions - 46/106 cm

New at the Breslev Israel store!   A necklace and pendant in real silver and inlayed in white stones.   A lovely gift item!