When we work on thanking and praising Hashem, this helps us to see Him more and more in our lives. Our (spiritual) eyes begin to see a different picture. 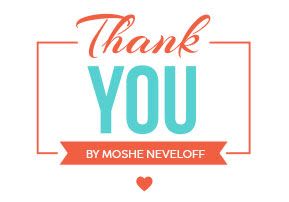 “G-d spoke to Moshe and said to him, ‘I am Hashem. I appeared to Avraham, to Yitzhak, and to Yaakov as El Shaddai, but with My Name Hashem I did not make Myself known to them” (Chapter 6, verses 2-3). Rashi explains that when the verse says “G-d spoke” it implies that He rebuked Moshe for his complaint at the end of last week’s Torah portion when he said, “My Lord, why have You done evil to this people, why have you sent me?” (Chapter 5, Verse 22).

Based on this verse, which mentions two of God’s Names, Elokim and Hashem (Elokim refers to G-d’s attribute of judgement, and the name Hashem refers to his attribute of mercy), Rabbi Natan teaches us a very powerful teaching about faith which we can all apply to our lives today, which Rabbi Arush quotes very frequently. Rabbi Natan says:

Really, if everyone would listen to the voice of the true Tzaddikim and walk in the path of always believing that everything Hashem does is for our best, and to always praise and thank Hashem, whether when things are good or bad; surely all of the sorrows and exiles would be nullified completely and the full redemption would already come.

However, the main thing which delays the redemption in general and each person’s private redemption in specific,  is  those  people  who  argue  with  and oppose a person. This is the aspect of Datan and Aviram, who came out and stood against Moshe1, and said, “Who appointed you… as a judge over us?” Even though all of a person’s suffering is eventually nullified through this advice of living with gratitude, nevertheless there is an opposing force which gets stronger as a person grows in faith which wants to overtake him completely and cause him to give up on his redemption, G-d forbid.

This aspect of argument and disagreement comes from the fact that there are many different actions and a multitude of details in the world, and therefore it is hard for a person to see that everything is only from one source, Hashem. However, Rebbe Nachman explains in Likutei Moharan that all of the tremendous amount of actions and the many details in the world are all really included in Hashem’s unity and oneness (2nd Torah, 2nd Part). By way of gratitude and praising Hashem, we help reveal this aspect of faith in the world. Pharaoh asked, ‘Who is Hashem?’ because in his arrogance he didn’t believe in Hashem. However, G-d showed through the miracles of the Exodus, the Ten Plagues, that all of the different actions and details in the world all come from Him. Everything is actually included in his unity, both the name Elokim and the name Hashem (Likutei Halachot, Laws of Loading and Un-loading, 4th teaching).

Personally, I remember several years ago, when my wife and I were in the difficult nisayon (test) of wanting more children, praying for more children, and feeling the pain of infertility. Our older daughter was already four years old. During that painful period, I received a pamphlet collected from the teachings of a big Rabbi here in Israel where he talked about the importance of gratitude. He said that we should even thank Hashem for those things which are difficult and painful for us, because it expresses our faith that truly everything is for our best and that even in the difficulty Hashem is with us. After reading that, I tried to increase my expressions of gratitude to Hashem in personal prayer, thanking Him also for the challenge of waiting again for another child and thanking Him for the blessing of our first daughter. I really felt like it gave me the strength to continue wanting, praying and believing that we would merit more children. It also helped me shift my focus from the pain, to seeing the blessings which I already had in my life.

On a simple level, being thankful to Hashem helps us to see all of the endless times he helps us when we need help, and to see all of the blessings he bestows upon us. When we work on thanking and praising Hashem more, this helps us to see Him more and more in our lives. Our (spiritual) eyes begin to see a different picture. We can feel his loving presence more as we go through all of the challenges in our lives. This is the aspect of the final redemption, when everything will turn around for the best and we will be redeemed from the suffering of the exile. This is seeing the one and only Hashem in all of the many, changing actions and circumstances.

Republished with permission from breslov.blog.

We learn something very precious from the fact that keeping Shabbat precedes even building the holy Tabernacle…
Never miss new articles!

3 min
Tetzaveh: Connect to the Tzaddik

Dovy and the Surprise Guests

Dovy and the Surprise Guests The Artscroll Middos series features exciting and fun stories with beautiful illustrations, each coming to impart a unique and valuable lesson about good middos. Dovy was always eager to have Shabbos guests. One week, he came to find out what true hospitality is all about. By Goldie Golding. Artscroll Middos Series. Hardcover, 28 pages.

Tell Me the Story of the Haggadah

Tell Me the Story of the Haggadah From the makers of Tell Me the Story of the Parshah - now the expereince of learning all about the Exodus from Egypt as well as all about the Hagaddah is available to children! Colorful illustrations and stories about the Exodus plus step-by-step teaching of the Haggadah. Made to last laminated pages. Includes a full Hebrew Haggadah in the back. Hardcover, 100 pages

Haggadah Simchas Yaabetz In this commentary, Rabbi Cohen reveals the brilliance that has made him a magnet  for people seeking the highest level of Torah knowledge. Those who study this Haggadah will find a richness they never imagined existed in the narrative that they have recited routinely--perhaps even mechanically-- since their youth. This Haggadah is a joy--a Simchas Yaabetz. By Rabbi David Cohen

Dr. Judith Loren, top cadiologist at Brookly's Fairmount Hospital, is busy with high profile surgeries and consultations around the clock. But when she encounters a terminally ill patient with a multimillion-dollar legacy, Judith must decide upon the fates of three orphaned Jewish children - as well as her own destiny.   With World War II raging across Europe, Joseph Laviers makes a difficult decision that ultimately saves his daughter's life. Upon his return to claim her following the war, the dedicated father and survior discovers the unthinkable. Will he ever be whole again?   A spellbinding tale that leads us to ponder the meaning of love and family - and reconsider the stigmas and convention in our lives.   By Ruth Arieli Rapaport. Hardcover, 530 pages, Tfutza Publications.

New!   Chumash & Tehillim & Sefer HaTanya in Microfilm    Segula for success, abundance and blessing and personal protection. Size: 7 x 10 cm   Take it along with you everywhere!