When God saved Noach and his family from the flood, He gave them seven mitzvot. These mitzvot are referred to as the "Sheva Mitzvot Bnei Noach," or the Noahide commandments. 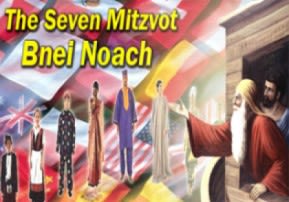 There are moments when lack of community and structure cause frustrations to build up. It's easy to feel angry and like someone is ripping them off…
Never miss new articles!

Are we Really Shortchanged?

Cloth Bag for Shofar with Embroidered “And You Blew the Shofars”

A unique and spectacular bag for the shofar - gray linen!   A beautiful bag for the shofar, made of linen fabric. In the center is embroidered the verse, "And you blew the shofars".   Size: 40 * 19 cm.   Very special! Honor the holidays with the little things at prices not to be missed!

The kidslide is a supplementary product to the Makrentz'ik that is sold seperately.   Insert this kidslide into the Makretz'ik and learn all about emuna and livelihood from Heaven. 12 minutes in length. The slide can be set for ongoing listening, audio only and other settings.   Yoel Waxberger has outdone himself with this very creative item - a kid-friendly projector. With the click of a button it projects onto your wall stories alongside audio of our Sages such as Yosef Honors the Shabbos, This Too is for the Best and more. Vivid colors and high quality audio make the stories come alive.   When your children go to bed at night, you can set the projector to the ceiling for exciting story time filled with Jewish values, fun and adventure. The beloved Kopla personality is integrated into the stories, which kids endlessly enjoy.                                          Approved by Rabbanim and educators shlit"a.   An educational and fun activity your kids will love!